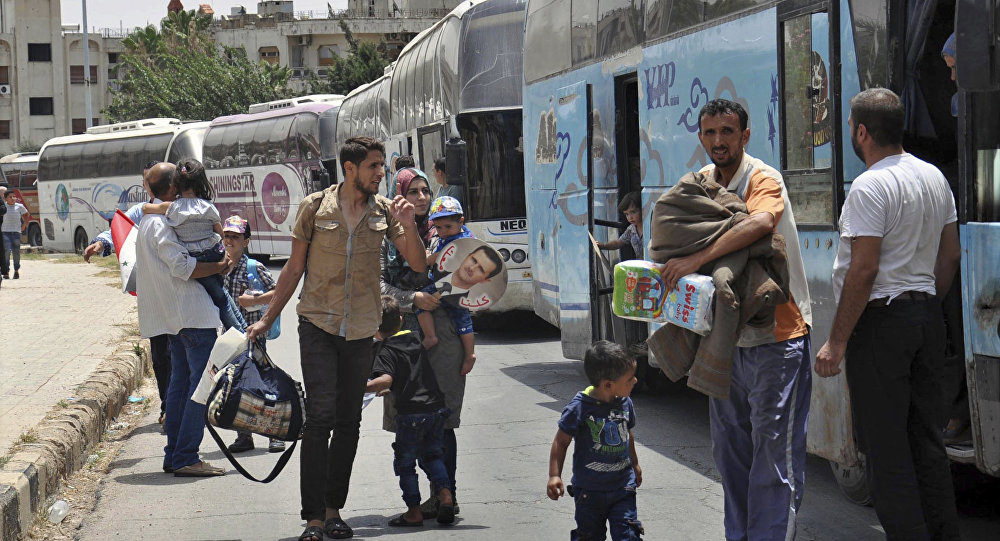 According to UN data, about 500,000 internally displaced Syrians have already returned to their homes.

ALEPPO (Sputnik) — The large refugee camps in Syria, including the one at a stadium in Latakia that housed about 20,000 people, are being dismantled in stages after the demining operations performed in the area.

"The Russian Center for the reconciliation of opposing sides in Aleppo has organized the move of 70 refugees from the settlement of Manbij to the settlement of Maskanah [in the Aleppo Governorate] jointly with Syrian authorities. We have also ensured safe passage for the convoy of refugees to their homes," representative of the Defense Ministry's center for reconciliation Soslan Tseboev told reporters Wednesday.

In eastern parts of #Aleppo you see lots of destruction yet you hear the laughter of children this is a strong sign of #hope #SupportSyrians pic.twitter.com/8tZG6JZzAU

Syrian sappers, assisted by Russian specialists from the International Mine Action Center, are carrying out demining operations in the settlements. Meanwhile, representatives of the center and Syrian authorities are locating families that had to leave their homes and coordinate the restoration of homes destroyed and basic infrastructure. The center then will ensure safe passage back home for refugees. Russian servicemen are also sending humanitarian aid convoys to the towns and villages that have been recently resettled but not fully restored, and monitoring ceasefire compliance.

The center is planning to expand its humanitarian activities in Syria in the near future. More than 4,000 tons of construction materials have been delivered to Tartus, as well as construction equipment, with all of this set to be sent to the areas that suffered the most destruction at the hands of the terrorists.

Moscow has regularly called on other countries to help the Syrian people since Russia is still the only party actively engaged in talks on humanitarian convoys and medical evacuation with the regional authorities. According to the Russian Defense Ministry, the Eastern Ghouta de-escalation zone has the highest concentration of communities in urgent need of humanitarian aid.

According to the United Nations, almost half a million refugees have returned to their homes from different regions of Syria.