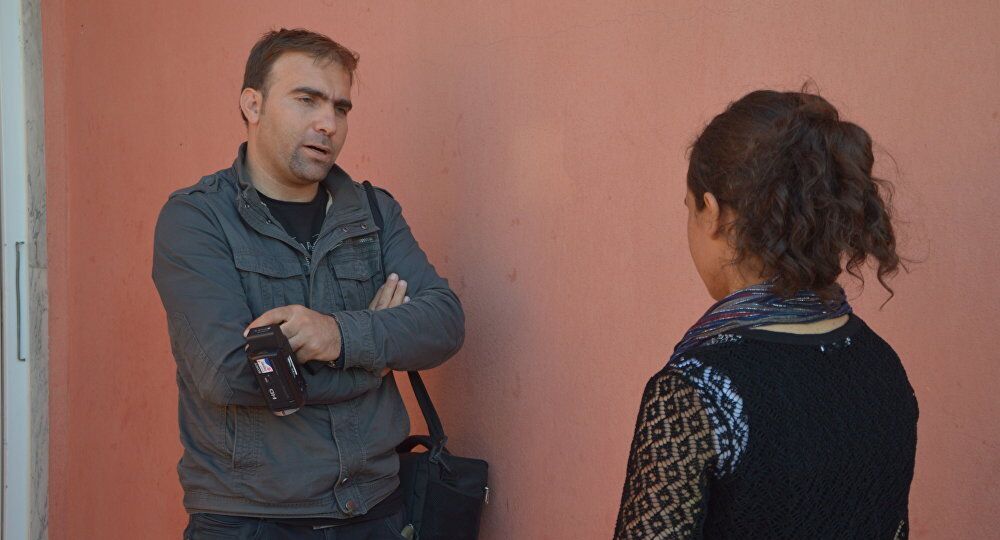 Amongst the Monsters: Yazidi Girl's Terrible Ordeal as Daesh Prisoner

A Yazidi girl, recently rescued from Sinjar by the Iraqi Army, was resold by Daesh 12 times as a sex slave. She was kidnapped, beaten and raped by the militants for over three years. Sputnik correspondent spoke to her about her terrible ordeal.

In an interview with a Sputnik correspondent, N.M Shemli, who was abducted by Daesh militants in August 2014, said that she was taken when she was 18 years old. Her six-year-old sister was also kidnapped by the terrorists.

“As soon as Daesh attacked the village and the center of Sinjar, I  along with my family and relatives, left in two cars. In the area of Sinone, our road was blocked by a convoy of five Daesh cars. We cried and begged to release us, but that did not help. First they drove us to the nearby US base, which was by then seized by Daesh. From there we were sent to Shilom, where several Yazidi men were executed right before our eyes,” Shemli said.

There the rest of the men, women and children were divided. The men were put in cars and were taken to Sinjar. The Yazidi women, including Shemli, were taken to the Tal Afar area.

© AFP 2021 / AHMAD AL-RUBAYE
Horrors of Daesh: Thousands of Yazidi Women Still in Captivity
In Tal Afar the women were kept in a school and terrorized by the militants. They were told to immediately convert to Islam, or they would be killed or sold as slaves.

“We stated that we will not give up our religion. One 17-year-old Yazidi, who refused to accept Islam, was killed; they cut her throat. After the first 20 days since my abduction they sent me to Mosul,” Shemli said.

​That is where the real horrors started for the young woman. She was sold from one militant to another 12 times.

Her first captive was a Daesh militant by the name of Ebu Ebdulhesit. He had two wives and children. Shemli stayed with them for a month.

“He beat and raped me many times. His wives did not say anything when he raped me. They made me do the housework,” the girl said.

She was then sold to Ebu Ellak for 40,000 dinars. He was from Mosul; he also had two wives. Both of his sons were also Daesh terrorists.

© REUTERS / Alkis Konstantinidis
Iraqi Troops Save Yazidi Family From Daesh Terrorists in Mosul
“With him, I stayed for six months. He constantly raped and beat me. I begged him to let me go home to my family, but he did not want to hear about it,” Shemli said.

​The militant, named Abu Dalut, was an Iraqi from al-Shirqat. With him Shemli stayed for six days, but according to her he did not rape her, nor did he treat her badly.

Her moment of peace, however, was short-lived as her next captive was Abu Faisal, with whom she stayed for “20 terrible days.”

“He constantly beat me, forced me to watch videos with scenes of executions of civilians by the Daesh terrorists,” Shemli said.

He then sold her to a 45-year-old Abu Bedir. He was a real monster too as he constantly terrorized Shemli by beating and raping her.

“I pleaded with him repeatedly to release me, but he said, ‘We are allowed to do anything with you. We have the right to do everything.’ I stayed with him for eight months. He died during a bomb attack by the military aircraft in the Geyare area,” Shemli said.

© AP Photo / Ahmad Al Rubaye
'Daesh Tortured My Brother for 40 Days Before Killing Him': Despite Major Gains, Peace is Still Elusive in Iraq
Her terrible ordeal continued as militants kept selling her from one man to another.

Three years had passed by then, when one day she was bought by Abu Taryk, who in turn sold her to Abu Abdullah. It was then that the operation in Mosul was nearing its end.

On July 4, 2017, the Iraqi Army conducted an operation in the area where Shemli was a slave and she finally received an opportunity to run away.

“I ran towards the location of the Iraqi military and I told them what had happened to me. I gave them my father's phone number and asked them to call him. My father came to get me. That's how I was saved. I cried so much when I saw my father,” the girl said.

Recalling her nightmares as a Daesh prisoner the girl said that she often thought of killing the militants, but she never had any weapon on her.

“Even if I killed them, I could not escape anywhere. Some of those Daesh militants who sold me and inflicted harm on me, died as a result of bombings by military aircraft, or during clashes. When I heard about their death, I was very happy,” Shemli said.

Often she thought of committing suicide, but the thought of seeing her family was the only thing that kept her going. Her six-year-old sister was also recently rescued from Raqqa.

“I thought that I should stay alive in order to someday get revenge by fighting against the militants of Daesh. Even now I fall asleep with great difficulty as the thoughts of what happened to me are always there,” the girl said.