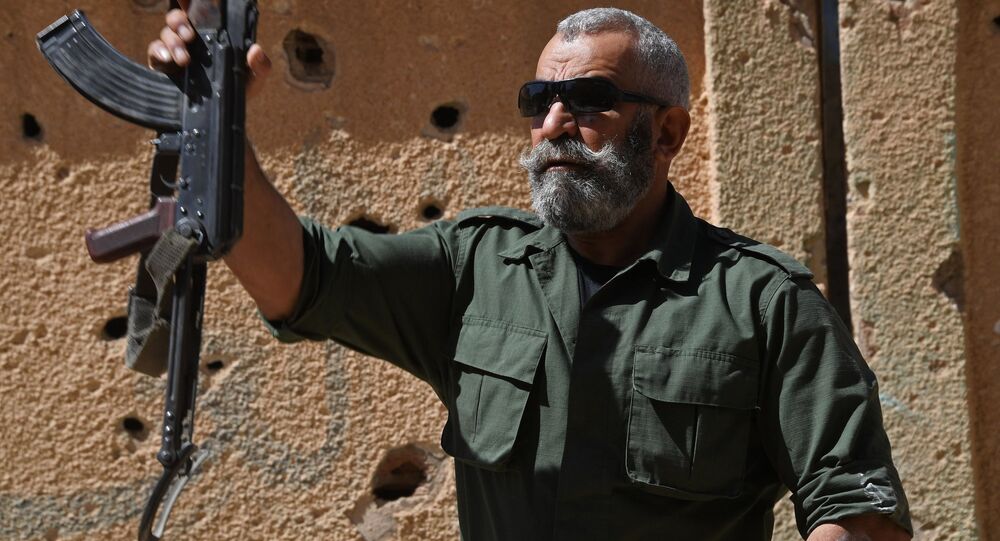 A Sputnik correspondent tells the story of Syrian Arab Army General Issam Zahreddine, who has been recently killed in a mine blast. The general defended Deir ez-Zor, once besieged by Daesh, and was known by servicemen as a true hero.

DAMASCUS (Sputnik) — News of the death of Syrian Arab Army General Issam Zahreddine has spread like wildfire among Syrians. For more than three years, Zahreddine was responsible for the defense of Deir ez-Zor, once besieged by Islamic State (also commonly referred to as ISIL, ISIS or Daesh in Arabic) terrorists, and died in a mine blast after the blockade was lifted.

Servicemen and everybody who knew him describe him as a true hero.

I met the general on the day the blockade of Deir ez-Zor was lifted. The tall and easily recognizable general with his magnificent beard and mustache, in his military outfit, was waiting with his soldiers for the elite Syrian unit, the Tigers, on the southwestern edge of the city, where the breakthrough took place. I spent a month with his unit on the frontline in the city, and was there during the breakthrough, then when we joined the fifth army at the southern entrance to the city, and later when the blockade of the Deir ez-Zor airbase was lifted.

Getting to him was easy. I went to a guard post in front of the Syrian Republican Guard’s headquarters, introduced myself as a Russian journalist and asked to take me to the general. My documents were checked, and five minutes later I was sitting at the table with the general. The room was full of military staff and journalists. There was tea, coffee and sweets on the table. The headquarters were on the ground floor, and Issam lived on the second.

"Everybody in this room is a true friend, those who came on a helicopter when we were besieged. Everyone else came after the siege had been lifted, but we are glad to see them too," Zahreddine said.

The soldiers of his unit of the Republican Guard defended the central districts of Deir ez-Zor, as well as in the most difficult sector near a graveyard in the southeast of the city. This was where General Issam Zahreddine, leading an assault unit, broke through the terrorists’ siege of the airbase to the east of Deir ez-Zor in September.

"My guys have been fighting for almost three and a half years. They are ready to go on fighting, because we all know that victory is close," Zahreddine told us, smiling and drinking his coffee slowly.

That evening we discussed the difficulties, the lack of people and the impossibility of providing them with some rest. The general spoke about the situation in the city, showing us on a map the tunnels used by Daesh and places where the Syrian army had tried to break through. He spoke about the lack of food during the blockade, when there was no meat and beans were the main food. Back then, the general used to joke that he would divorce his wife if she cooked a dish of beans when they finally meet.

We sat together deep into the night.

"You can come with us to the frontline tomorrow, if you like," the general offered, patting me on the shoulder when we were leaving. I accepted the offer.

© Sputnik / Ministry of Defence of the Russian Federation
Russian Deminers Clear City of Deir ez-Zor in Syria
11
The advance began in Jafra. According to the plan, the Guard’s fighters had to reach new grounds and cut off one of the main supply routes on the west bank of the Euphrates River. Units of the 17th division supported the Republican Guards on the flanks.

The command post was situated half a kilometer (0.31 miles) from the jihadists’ frontlines. There was a mine field between us, as well as trenches that turned into tunnels and led to the line of contact.

The general and senior officers were directing the aircraft and cannons, and observing the land units form the roof of a building. At some moment, the connection with the frontline broke. Issam got angry, took his weapons and two fighters and went to the frontline to lead the advance on the ground.

He came back to the roof in about an hour.

"We need tactics here, and I won’t send my guys on a suicide mission. We will overwhelm the terrorists with fire and then clean it up. And I should be with them, setting an example," he explained, his finger on the map.

By this time, the terrorists had found the command post where we were staying, and a mortar attack began. Shells were exploding around the house. We went down to the ground floor, with the walls protecting us.

"Can you see the water station behind? This is a special place for me. I was heavily injured there in a battle in 2014," the general said, smiling and adjusting his wonderful mustache. He always used to smile while talking, even when about serious topics.

When it became clear that the advance was taking too long, the general asked me to return to the city. I left, accompanied by soldiers. They returned to Zahreddine with food and munitions.

The next time we met was last Sunday, October 15, when the general returned from a 10-day-long vacation that he was finally able to take once the blockade was lifted. He had had time to meet with his family in the Suwayda Province before he came back to Deir ez-Zor to join his soldiers in the last fights against terrorists to liberate the rest of the city’s living quarters.

When he found out that I was about to return to Damascus, he sent his officer to invite me for tea in the evening. Besides the general and several soldiers, there were two men dressed in national dress in the house, with skin on their hands and faces dark from the sun, and tired eyes.

"These are old acquaintances of mine who have been helping me for a long time. They are farmers and used to live near Mayadin [a city in the Deir ez-Zor Province which has long been controlled by Daesh], under Daesh. They managed to escape, and 20 days later they found me and told me what was going on in the enemy’s camp," the general said, introducing me to them.

He explained that they had helped him before by providing him information about the terrorists. Initially their tribe did not support the terrorists, but they had to live on the lands taken by Daesh, fearing for the lives of their families.

Having fed the guests with a large supper, Zahreddine unfolded a map and asked for tea.

"And now we can talk," he said to his guests, pointing at armchairs.

One of the men started to talk, pointing at places on the map with his finger.

"They have vehicles and three tanks here and here near Mayadin. Here they plant bombs in cars and tractors. Our relatives say there are foreigners, mainly from Arab countries, but there are people from Central Asia and one Frenchman, too," he said.

From time to time, Issam would get distracted from the map and show the men pictures of their common friends, and they would compare prices for food there and in Deir ez-Zor during the blockade. The general was joking, the guests were talking about their life on the occupied land. From time to time, the farmers would ask if it was true that they had clean water here, because before the breakthrough, it was also a rare sight in Deir ez-Zor. The guests drank many glasses of water during the meeting.

© AP Photo / Vadim Ghirda
At Least Three Civilians Killed as Int'l Coalition Hits Deir ez-Zor With White Phosphorus - Syrian State TV
The second man told us about the life on the land occupied by the terrorists. The rules were severe. For a small mistake, such as a deviation in dress code, one had to pay a huge fine and suffer 40 lashes on the back.

"We had a funny situation last year. One man from the village lost his wife. And all women wear black, their hands and faces cannot be seen. This man kept asking us if we had seen his wife. When I asked him how we could recognize her, he said with surprise that she wore light-green shoes," the man said.

The evening went by like that, with questions and answers, funny stories and jokes. When we said our goodbyes to Issam, we exchanged small souvenirs and promised to meet in Damascus when Deir ez-Zor was liberated.

The general laughed sincerely at the insignia that I gave to him, saying "Russian Tactical Beard" and showing a bearded head in an ushanka hat with a red star. Issam, who had a great beard himself, said that there definitely was some resemblance.

The general had given me an insignia saying "Republican Guard" in Arabic to remember him by. Three days later, he was gone.