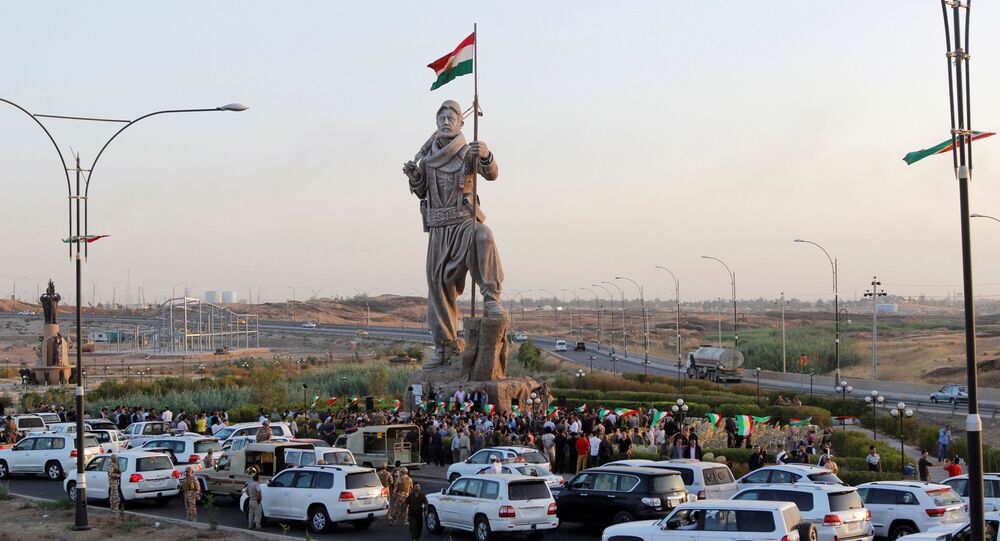 A source from the Iraqi Security Forces has told Sputnik that Daesh militants have taken advantage of the political crisis between Baghdad and Kurdish authorities in Erbil, and have freely advanced into recently liberated villages in Kirkuk province.

The terrorists advanced into the area from villages under their control from the Al-Hawija area, west of Kirkuk province, the source said.

Locals told Sputnik that they saw terrorists enter the area of al-Dabas, about 24 km north of Al-Hawija, and several other nearby villages in Kirkuk province. Daesh freely entered the villages, locals said, because Kurdish Peshmerga fighters were absent, and residents had fled from the area to the cities of Sulaymaniyah and Erbil. The fighters have now established themselves in the area, the source added.

© AFP 2021 / SAFIN HAMED
Washington Struggling to Solve Kurdistan Crisis Created by Chaotic US Policies
Late last month, Iraqi Kurdistan held a referendum on independence, with 92.7% of voters voting for independence amid turnout of 72.8%.

The referendum has led to an increase in tensions in the Middle East, with global and regional actors searching out ways to establish their position vis-à-vis Erbil. Iraq's neighbors of Turkey, Iran and Syria are particularly concerned, given the Kurdish populations in their own countries.

On Tuesday, Prime Minister Haider Abadi said that Iraq's dialogue with Erbil should be based on Iraq's constitution. Over the weekend, Iraqi police and military in Kirkuk province secured bases and federal facilities including oil fields and transport infrastructure. Erbil, which has administered the facilities over the past three years, offered no resistance. The United States has been left in a bind by the conflict, calling on Iraqi and Kurdish authorities to avoid provocations in Kirkuk.