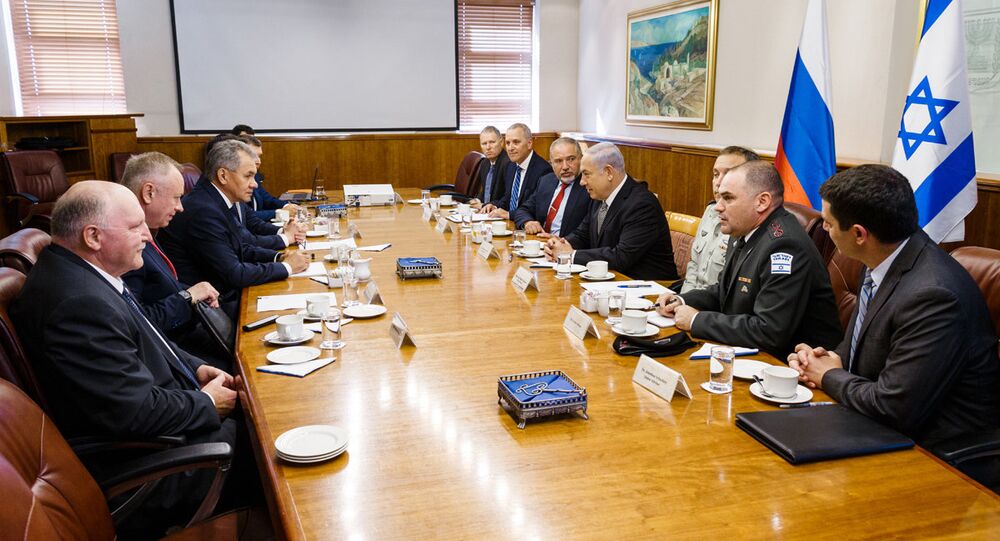 The Israeli Prime minister met with the Russian defense minister to discuss the situation in Syria, as well as the Iran nuclear deal in light of the US decision not to certify the agreement.

Commenting on the agenda of his meeting with Shoigu, the Israeli prime minister said that the talks were dedicated to "above all, Iran's attempts to establish military bases in Syria."

The Russian Defense Ministry is yet to comment on Israel's concerns over Iran's actions in Syria. Commeting on the negotiations, the Russian deputy defense minister has said that Shoigu and Netanyahu had "expressed confidence that the meetings held on the Israeli soil will give an additional impetus to the development of Russian-Israeli cooperation."

Israel has been long opposing Iran's and Lebanon-based Hezbollah's presence in Syria. Iran has been providing support to the Syrian government in its fight against various terrorist groups, including Daesh, and acts alongside Russia and Turkey as one of the guarantor states of the ceasefire in Syria. Tehran has repeatedly refuted media reports claiming that its military had conducted independent operations in Syria.

During his September meeting with Russian President Vladimir Putin, Israeli Prime Minister Benjamin Netanyahu accused Iran of building sites in Syria and Lebanon to produce missiles allegedly aiming to eradicate Israel. When asked to comment on the statement, the Russian foreign minister, Sergei Lavrov said that Moscow has "no information that someone is preparing an attack on Israel."

© AFP 2020 / BEHROUZ MEHRI
Iran, Unlike US, Fully Implementing Nuclear Deal - Russian Deputy FM
The Israeli prime minister and the Russian defense minister have also discussed the US president's decision not to certify the Iran nuclear deal.

During his UNGA speech in September, Netanyahu has again addressed the threat Israel believes Iran poses to its security. According to him, the nuclear deal with Iran must be changed or canceled entirely.

US President Donald Trump has repeatedly voiced support for Israel's stance on the nuclear agreement, calling it a "bad deal for Israel."

On October 16, Trump suggested that Washington might unilaterally exit the agreement despite Rex Tillerson's earlier comments, saying that the United States will try to negotiate the agreement, which is, according to him, in the best interests of his country.