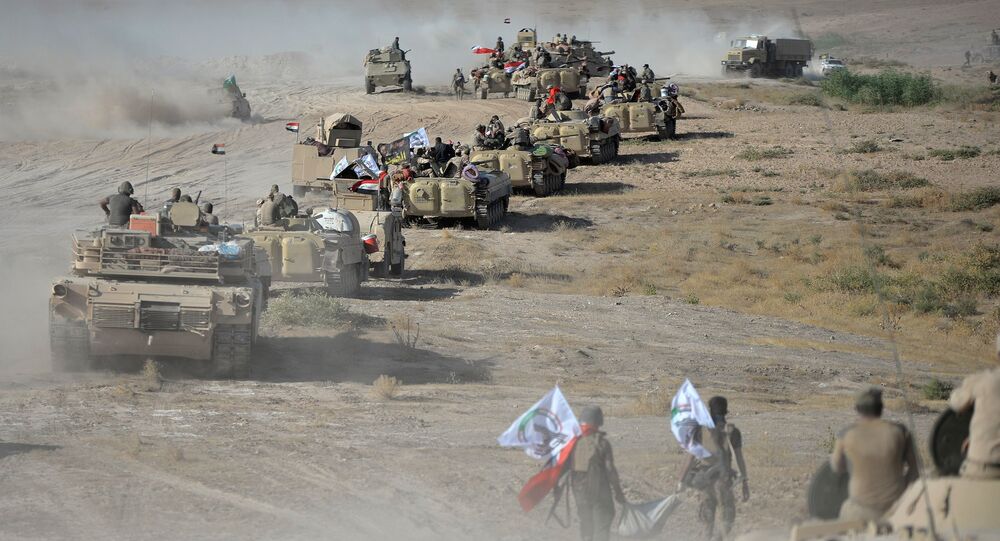 The Iraqi army is still advancing forward in the Kurdish areas, striving for independence.

MOSCOW (Sputnik) — The Iraqi federal forces have established control over the town of Sinjar in the Nineveh Province, located west of Mosul, following the withdrawal of Kurdish Peshmerga forces from their positions, local media reported Tuesday citing a Kurdish security official.

According to the Rudaw broadcaster, after abandoning their positions the Kurdish Peshmerga forces were attacked by the Iraqi Shiite militia Hashd Shaabi east of the town. Troops engaged in a brief clash, with the Peshmerga successfully repelling the attack.

Late on Sunday, Iraqi Prime Minister Haider Abadi ordered the country’s army and police to secure bases and federal facilities in the Kirkuk province following the Kurdish independence referendum, which was deemed illegal by Baghdad. On Monday, Iraqi troops established control over a number of military and transport facilities in the province, including the airport, military base and oil fields.

The Baghdad-Erbil conflict over Kirkuk, which had been controlled since 2014 by the Peshmerga, the military forces of the autonomous region of Iraqi Kurdistan, worsened after the oil-rich province took part in the Kurdish independence referendum on September 25. The vote, which upheld the independence of Kurdistan and surrounding Kurdish-held areas, was declared invalid by Baghdad.

Iraqi soldiers asking former #kirkuk governor to give them the wifi password in his office in the city pic.twitter.com/psCiDezeVA

Khoshavi Babakr, Iraqi Kurdistan representative in Russia and the Commonwealth of Independent States has commented on the situation.

"The Kurds will counterattack, at the moment the troops are put on standby in order to retake regions seized by the Iraqi forces,” Babakr said.

The Kurdish official explained that the advance of Iraqi forces in Kirkuk was made possible after the leader of the Patriotic Union of Kurdistan (PUK), which controlled 80 percent of the Kirkuk province and the Iraqi town of Tuz Khurmatu, had signed an agreement with Iraqi Shiite militia Hashd Shaabi and handed the control over disputed areas to the Iraqi forces.

"The fast advance and progress of the Shiite troops occurred mostly due to treason among Peshmerga forces," he said.

Babakr stressed that latest developments would not force the province’s authorities to annul the referendum results, on the contrary, it would enhance the region’s attempts to gain independence from Iraq.

“Only independent Kurdistan can hope for international support and protection from the aggression and instability of actors in the Middle East. All the constitutional principles of the joint governance of Iraq, all the principles of cooperation have been completely violated by Baghdad. Furthermore, they declared war on Kurdistan and its legitimate government. The only solution to the situation is to declare Kurdistan’s independence as soon as possible,” he said.

According to Babakr, Iraq was likely to escalate the conflict, since Baghdad had already violated all the constitutional principles and had "nothing to lose."

“We will need Russia’s role as a mediator very much. The role of Russia, unlike Western countries and the coalition, has been much more loyal. We are thankful to Russia for its position. Last week, [Kurdish] President [Masoud] Barzani sent a letter of gratitude to the Russian Consulate General in Erbil,” Babakr said.