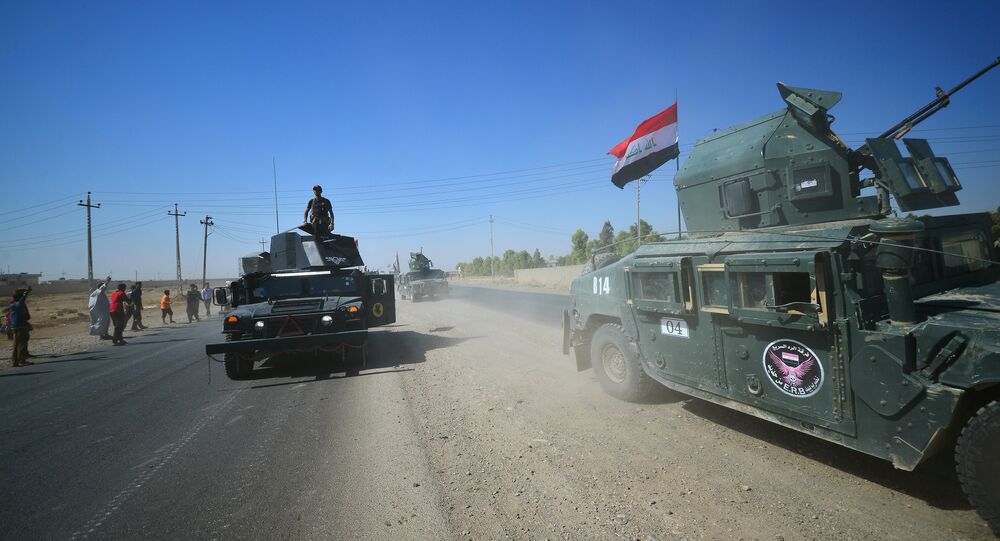 Baghdad has launched a military operation in the northern province of Kirkuk, disputed by both the central government and Iraq Kurdistan, following the province's participation in the September 25 referendum on the autonomous region's independence.

MOSCOW (Sputnik) — The Iraqi armed forces managed to capture strategic positions in the Kirkuk region, which held the vote on the Iraqi Kurdistan's independence too, despite not being a part of the region.

Most regional officials, including governor Najmiddin Karim, had left for Kurdistan.

© AFP 2021 / MARWAN IBRAHIM
Iraqi Police Gain Control of Kirkuk Administration Bldg Without Fight - Source
The Iraqi government said that its forces had been instructed to secure bases and federal facilities in the province of Kirkuk. The government also said that Prime Minister Haider Abadi had ordered the Iraqi Security Forces to cooperate with Peshmerga and protect civilians.

Hemin Hawrami, senior assistant to Kurdish President Masoud Barzani, said that Peshmerga had clashed with the Iraqi forces attempting to enter the disputed region and pushed them back. Hawrami went on to add that Barzani had also instructed Peshmerga not to initiate altercations and only act when the other side begins the assault.

© REUTERS / Stringer
Baghdad Goal in Kirkuk and Iraqi Kurdistan Is Protection of Locals – PM
The Iraqi army command issued a statement saying that the Iraqi troops had secured control over the K-1 military base, Baba Gurgur and Bai Hassan oil fields, as well as Kirkuk's irrigation system.

The leadership of the Iraqi Kurdish Peshmerga paramilitary forces said later in the day that the attack on Kirkuk could be considered a "declaration of war" on the Kurds.

Nada Khal Khamza, a lawmaker in the Iraqi parliament, a member of the Kurdish coalition, told Sputnik that Baghdad was acting "undemocratically."

"All actions to boost military presence will only lead to the escalation [of the conflict], but not to the solution of the problem… It seems as if the Iraqi government does not want to hold a dialogue with Kurds," the lawmaker said.

According to a lawmaker from Erbil, Tariq Sadiq Rashid, the situation is likely to change at any moment, but "the military power will now play the most important role."

Khamza said, however, that Iraqi Kurdistan was still advocating for all parties to sit down at the negotiating table.

Pentagon has urged both Erbil and Baghdad to avoid further escalation of the conflict, stressing that the United States supports "a unified Iraq."

"We strongly urge all sides to avoid additional escalatory actions. We oppose violence from any party, and urge against destabilizing actions that distract from the fight against ISIS [Islamic State, Daesh, a terrorist organization outlawed in Russia] and further undermine Iraq's stability," Laura Seal, a spokeswoman for the Department of Defense, said on Monday in a statement.

The Turkish Foreign Ministry said Ankara was ready to help Baghdad drive Kurdistan Workers’ Party (PKK), listed as a terrorist organization in Turkey, out of Iraq. On Sunday, the security council of the Iraqi government claimed that Iraqi Kurdistan had summoned non-state armed forces, including the PKK, to the disputed Kirkuk province, and suggested that the move might be seen as the declaration of war on Iraq. Erbil promptly refuted the allegations.

Moreover, Ankara has decided to close Turkey's airspace for Iraqi Kurdistan amid the ongoing fighting in Kirkuk.