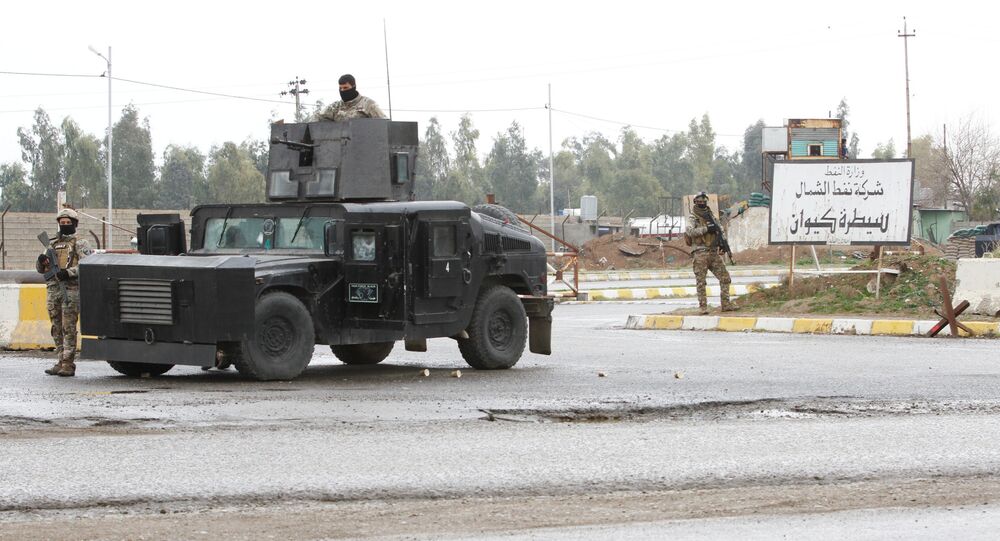 Exchanges of artillery fire have reportedly taken place south of the city of Kirkuk in Iraq between Iraqi Army and Kurdish forces. The Iraqi troops have launched a massive offensive to take control over the contested region.

"I just spoke with our commanders near Taza Khurmatu, they said: PMF tried to advance twice, we pushed them back… A Peshmerge commander from first brigade confirmed that they have ambushed four advancing PMF Hamvees [Humvee, a light military truck], destroyed all of them and pushed them back in Taza Khuramtu," Hawrami wrote on Twitter.

Hemin Hawrami also added that President Barzani ordered Peshmerga forces not to initiate any clashes, however, "if any advancing militia starts shooting, then Peshmerga are given green light to use every power to stand against them."

Earlier in the day, Iraqi Kurdistan’s Security Council said that the Iraqi government forces had started an offensive to gain control of the province of Kirkuk, including oilfields and air base west of the city. The disputed province has been under control of the Kurdish Peshmerga paramilitary forces since 2014, when the Kurds expelled the Daesh terrorist group’s forces from the region.

According to the Iraqi government Prime Minister Haider Abadi gave the order to the country’s army and police to secure bases, federal installations in Kirkuk, but avoid confrontations with the Kurdish forces.

The Pentagon called on Baghdad and Iraqi Kurdistan to avoid further escalation in Iraq, Laura Seal, a spokeswoman for the Department of Defense, said on Monday in a statement obtained by Sputnik.

"We strongly urge all sides to avoid additional escalatory actions. We oppose violence from any party, and urge against destabilizing actions that distract from the fight against ISIS [Islamic State, IS, a terrorist organization outlawed in Russia] and further undermine Iraq's stability," Seal said in the statement.

The spokeswoman added that the United States continues to "support a unified Iraq."

"Despite the Kurdistan Regional Government's unfortunate decision to pursue a unilateral referendum, dialogue remains the best option to defuse ongoing tensions and longstanding issues, in accordance with the Iraqi constitution," Seal stated.

She also reiterated that the Pentagon "remains focused on the fight against ISIS [Daesh]," and called on Baghdad and Erbil to focus on tackling this common threat instead if "stoking tensions among the Iraqi people."

© Sputnik / Dmitriy Vinogradov
Iraqi Kurdistan Accuses Baghdad of Preparing Military Operation in Kirkuk
On Thursday, Iraqi authorities reportedly demanded from the Kurdish militia to leave the areas to the south and west of Kirkuk so that Iraqi army could move into the city. The Peshmerga withdrew its troops from the city of Tuz Khurma located southeast of the disputed Kirkuk province, and its positions were replaced with Iraqi troops. However, former governor of the disputed Kirkuk province Najmaldin Karim said on Sunday, the militia rejected demands of Iraqi authorities to leave the areas close to the city of Kirkuk.

Following Iraqi Kurdistan's independence referendum on September 25, Iraqi Prime Minister Haider Abadi received approval from the country's parliament to deploy troops to the province of Kirkuk, which is disputed between Baghdad and Erbil. Kirkuk held the vote too, despite not being a part of Iraqi Kurdistan.

'No Such Force Exists to Take Kirkuk From Kurds' – Peshmerga Commander