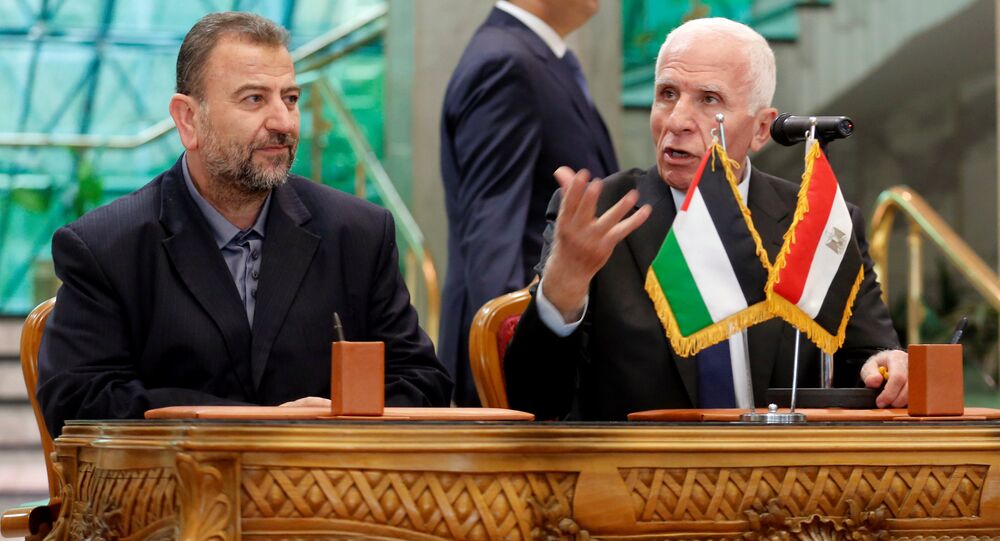 Agreement Reached Between Hamas and Fatah, But Can the 'Circle Be Squared'?

Hamas and Fatah have finally reached an agreement on a deal after a decade of mutual hostility. Sputnik spoke to a Middle East expert about what the deal could mean for the Palestinian people.

The rival Palestinian organizations Fatah and Hamas signed an agreement in Cairo on Thursday, October 11, with both sides promising it would usher in a new era of Palestinian unity.

But Dr. Jacob Eriksson, the Al-Tajir Lecturer in Post-War Recovery Studies at the University of York, said it remained to be seen whether the deal would hold.

"The proof will be in the pudding. We have an agreement but what has bedeviled it in the past is the implementation. Perhaps there is something different with the new Hamas leadership… but the faultlines remain very clear," Dr. Eriksson told Sputnik.

Fatah and Hamas have been at loggerheads for a decade, with the former controlling much of the West Bank and the latter ruling the roost in the Gaza strip.

Readout of the Secretary-General’s telephone call with Mr. Mahmoud Abbas, President of the State of Palestine: https://t.co/tqilWa0rMV

Hamas is far more militant than Fatah and is associated with Islamist organizations like the Muslim Brotherhood in Egypt while Fatah, which was led until his death by Yasser Arafat, has always been a secular group.

"This has been such a long-standing conflict and the fact that they have a reconciliation agreement is not a novel development, but what was interesting is that Hamas has volunteered to dismantle their organization in Gaza and has invited Fatah to come back as a security presence at the border crossings, like Rafah," Dr. Eriksson told Sputnik.

He said in the past this had always been the key problem with Hamas insisting it would not dismantle its military wing, which was involved in the war with Israel in the summer of 2014 in which 1,500 Palestinian civilians were killed.

Heartwarming gesture by @SeFutbol's @SergioRamos — visited baby carrying his name, son of Hail Stawi, who was murdered by terrorists in July pic.twitter.com/UakcpDm6iQ

In early October, the Palestinian Unity Government held its first session in Gaza since 2014 as part of implementation of the arrangements aiming to settle the long-standing conflict between the Palestinian parties and President Abbas is reportedly planning to visit Gaza himself in the next month.

"While this is positive, I'm yet to be convinced we will see new elections or Hamas giving up control of the Gaza strip, which is their massive bargaining chip," said Dr. Eriksson.

He said Hamas had come under a "great deal of external pressure" in recent months, which had no doubt played a part in them reaching a compromise with Fatah.

"Hamas is struggling to meet the needs of the people of Gaza. There is an increasingly acute humanitarian situation which is becoming unbearable for people there," Dr. Eriksson told Sputnik.

Egypt, under its secular leader President Abdel Fattah el-Sisi, had put pressure on Hamas, which relied heavily on Egyptians for supplies.

Dr. Eriksson said the increasing isolation of Qatar, which has been targeted economically and diplomatically by Saudi Arabia and her allies, had also played an important part because Qatar had supported the Muslim Brotherhood and Hamas.

"If Hamas can't rely on support from Qatar, it puts them at a disadvantage," he told Sputnik.

Dr. Eriksson said President Abbas had also taking a strong and coercive line, refusing to pay salaries to Hamas staff and cutting electricity to Gaza after a row about payment.

"The faultlines are still very clear. Fatah does not want to put up with the Hezbollah model that they have in Lebanon, and that is fundamentally a key issue of the dispute," Dr. Eriksson told Sputnik.

"Hamas is unwilling to dismantle its military wing and it is not clear how that circle will be squared," said Dr. Eriksson.

Whether the new Palestinian unity will last remains to be seen, let alone whether it can improve the chances of a final implementation of the "two-state" solution with Israel, which has become increasing unlikely as Donald Trump shows no sign of forcing Israel into a deal.

Hamas to Strengthen Relations With Iran After Clashes Over Syria