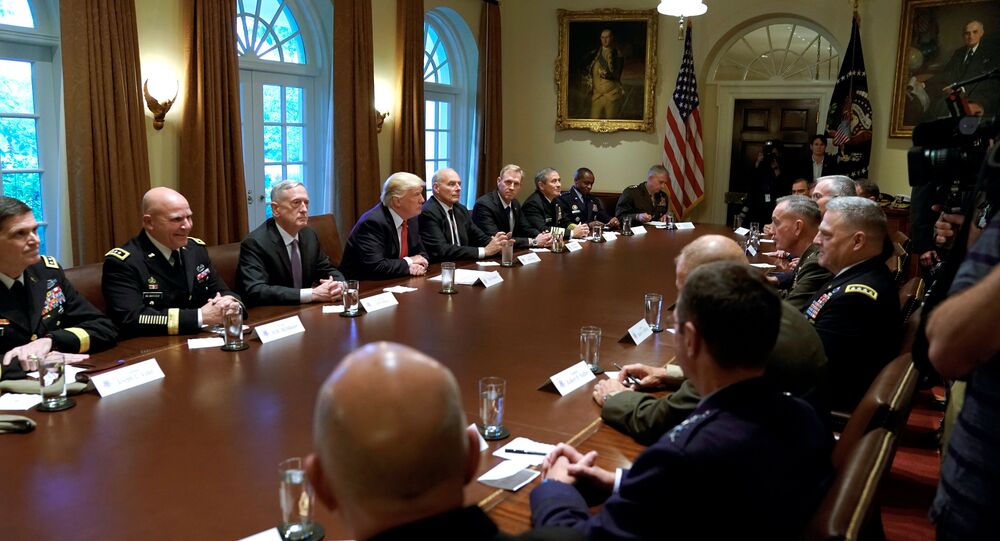 Trump Hints at 'Calm Before Storm' at Meeting With Military Leaders

Donald Trump has hinted at a "calm before the storm" while posing for a photo before meeting with the country's military leaders without, however, clarifying what it means.

WASHINGTON (Sputnik) — US President Donald Trump puzzled the White House media pool on Thursday evening, referring to the time he took to pose for a photo with the country’s military leaders as the calm before the storm.

"You guys know what this represents?" he suddenly asked journalists during the photo opportunity at the White House. "Maybe it’s the calm before the storm."

Trump did not elaborate on what the storm could be and smiled when he was asked if he meant Iran, saying "You will find out."

© REUTERS / Joshua Roberts
Trump Expected to Declare Iran Noncompliant with Nuclear Deal - Reports
Before the dinner, the US leader discussed Iran and North Korea with Pentagon and other officials. He again accused Tehran of failing to "live up to the spirit" of the 2015 nuclear deal after local publications claimed mid-October was the deadline for the US withdrawal from the pact.

The Joint Comprehensive Plan of Action commonly referred to as Iran Nuclear Deal was signed in July 2015 by Iran and the P5+1 group of nations comprised of the United States, Russia, China, France and the United Kingdom plus Germany after years of diplomatic work.

Donald Trump called the JCPOA, negotiated under President Barack Obama's watch "an embarrassment" to the United States during his speech to the UN General Assembly.

Iran May Abandon Nuclear Deal If US Withdraws

Why Trump Hostility on Nuclear Deal Empowers Reactionaries in Iran