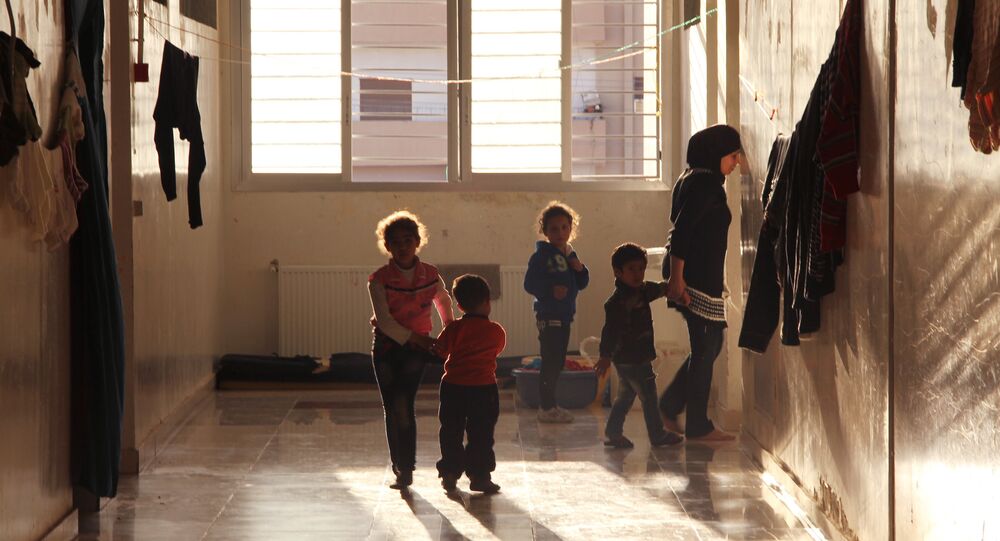 Children from the Hafez Assad Memorial Orphanage in Damascus, Syria have sent hundreds of letters and drawings pleading for peace with militants in the rebel-controlled eastern Ghouta de-escalation zone, orphanage director Shahir Falluh has told reporters.

"Today we organized a special lesson at the orphanage," Falluh said. "The children wrote peace letters to the combatants in the eastern Ghouta de-escalation zone."

The Hafez Assad Memorial Orphanage, named in honor of President Bashar Assad's father, is one of the oldest educational institutions for orphans in Syria. Founded over 40 years ago by Hafez Assad for children who lost their parents, the orphanage now has about 600 boys and 700 girls from regions across Syria. Children are admitted to the boarding school starting from the age of three months.

Over the course of the war in Syria, which began in 2011, the orphanage has been shelled by militants repeatedly. "Each time it's happened, we do repairs, restore everything, and try not to interrupt the learning process," Falluh stressed.

"It's not as difficult to build a new building as it is to raise a genuine human being," the orphanage director added.

© AP Photo / Hassan Ammar
Putin Names World's 'Most Urgent' Tasks in Syria
The de-escalation zone in the Damascus suburb of eastern Ghouta is located in close proximity with the orphanage. Russian military police units are deployed in the area to monitor the ceasefire. Police sent the letters to the de-escalation zone in a school bus carrying the children of fighters from the so-called moderate opposition.

Eastern Ghouta has been the focal point of long-running battles between Syrian government loyalists and militants including the Free Syrian Army and a collection of Islamist extremist groups known as the Islamic Front. In addition to fighting government forces, the militants have often turned to fighting each other.

Eastern Ghouta became the source of considerable media attention in 2013, when it was struck by a chemical attack which is thought to have killed hundreds of civilians. Militants and the Western powers accused the Syrian government of responsibility for the attack. In turn, Damascus and Moscow speculated that the attack was a false flag designed to prompt a Western military response.