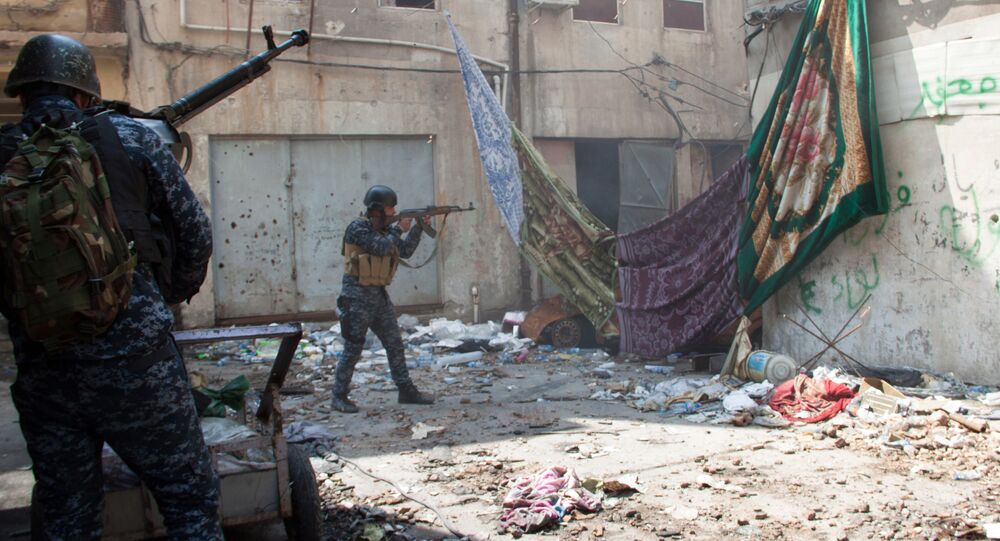 A famous Iraqi sniper, who had eliminated hundreds of Daesh terrorists in the last six years, was killed in northern Iraq.

Abu Tahshin al-Salihi, nicknamed the “Daesh Hunter,” was killed in Iraq, according to RIA Novosti, quoting the Shiite militia of Iraq, al-Hashed al-Shaabi.

As the Iraqi forces and the Hashed al-Shaabi units were advancing towards the Daesh stronghold of Hawija to recapture the town from the militants, Abu Tahshin was shot and killed.

Iraqi social media users distributed a video in which the famous sniper admits to having eliminated 321 Daesh militants.

© REUTERS / Alkis Konstantinidis
Iraqi Forces Kill Hundreds of Daesh Terrorists During Offensive in Hawija
He was known by many names: the “Sheikh Sniper,” “Hawk Eye” and “Daesh Hunter.”

Abu Tahshin was a war veteran having served in the Iraqi Army and took part in all the major wars that Baghdad faced since 1973.

The sniper’s funeral took place in his hometown of Basra in southern Iraq and was attended by the militia commanders, as well as the representative of the Shiite Iraq, Ayatollah Ali al-Sistani.

During the battle for Hawija, the Iraqi forces killed more than 200 Daesh terrorists and liberated around 500 square kilometers (over 190 square miles) of territory west from the northern town, last Saturday.

The armed forces also destroyed vehicles and weapons belonging to the terrorists and managed to move 90 families away from the area of clashes.

Earlier, the Iraqi authorities announced that they had freed over 90 percent of the territory from Daesh militants. According to government data, over 2.2 million refugees have returned to the Iraqi regions after those areas were liberated.