A source told Sputnik that the Syrian army supported by allied forces were clearing areas near the roadway connecting the cities of Palmyra and Deir ez-Zor.

DEIR EZ-ZOR (Syria) (Sputnik) – The Syrian army and allied forces are clearing areas near the roadway connecting the cities of Palmyra and Deir ez-Zor, a source in Deir ez-Zor operational headquarters told Sputnik on Saturday.

“Some IS [Daesh] terrorists fled to the desert after the attack had been repelled. Now the army and allied forces are chasing the enemy and clearing the areas near the highway,” the source said.

Earlier in the day, a source told Sputnik that the Syrian government troops and allies had repelled a massive counterattack of jihadist forces on a key supply route linking Palmyra and Deir ez-Zor. 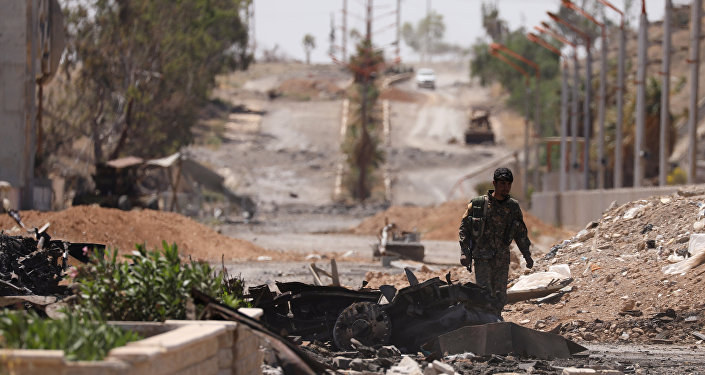 © REUTERS / Rodi Said
West Seeks to Capture Syrian Oil Resources Instead of Fighting Daesh - Deir Ez-Zor Governor
The source pointed out that the main operation took place between the settlements of Ash Sholah and As Sukhnah and was aimed at ensuring the security of highway traffic.

The highway between Palmyra and Deir ez-Zor has recently become passable for humanitarian convoys after the Syrian government forces breached the three-year siege of Deir ez-Zor by Daesh on September 5.