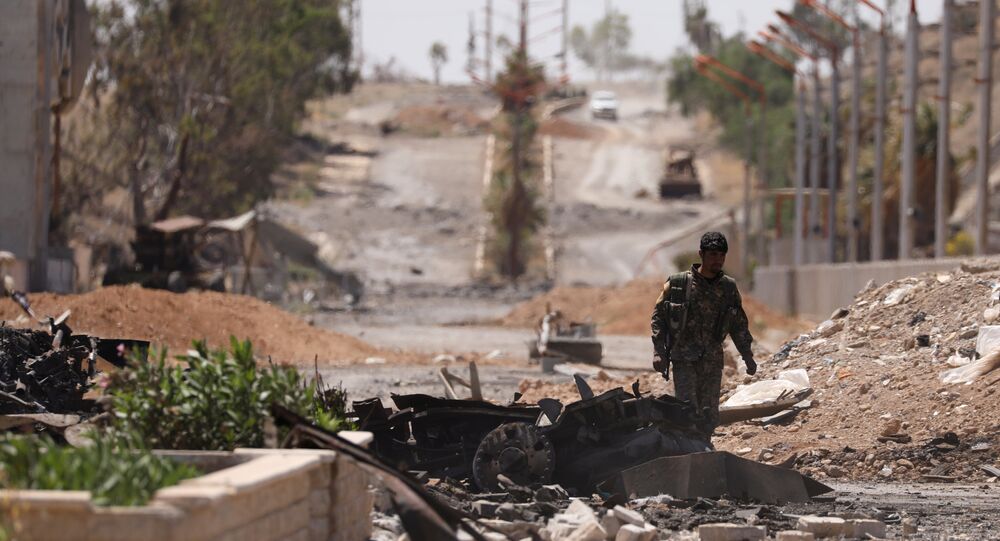 The governor of Syria's Deir ez-Zor calls the US-led coalition's struggle against Daesh in Syria a theatrical performance, aimed at establishing control over the Syrian economy, in particular, its oil and gas resources.

DEIR EZ-ZOR (Sputnik) — Western countries are taking steps to put Syrian oil and gas resources under their control using the struggle against the Daesh terrorist group (outlawed in many countries) as a pretext for their activities instead of any real struggle against jihadists, the governor of Syria's Deir ez-Zor province told Sputnik in an interview.

"Speaking about the so-called western US coalition, its only goal is to hide the truth from society. At the same time, the situation is becoming clearer and clearer. The European community is starting to understand the complicity of their leaders in support of the terrorists… The main goal [of the Western states] is to establish control over the Syrian economy, first of all [over its] oil and gas resources," Mohammad Ibrahim Samra said.

The Kurdish-led Syrian Democratic Forces (SDF), whose positions were to the north of Deir ez-Zor are acting to the benefit of the United States, the Syrian official added.

"It is not a secret. Even in the struggle against IS [Daesh], for example in [the city of] Raqqa it was nothing more than a theatrical performance. IS was leaving territories and the SDF established control over them and the roles have now changed. This situation has taken place because they are all the allies of the United States and the so-called coalition," the governor said.

The official recalled that the US-led coalition had attacked positions of the Syrian army several times such as the 2016 attack targeting positions at the Sarda hills that had been followed by a large-scale attack by the terrorists.

The US-led international coalition has been conducting airstrikes, as well as using ground-based and rocket-propelled artillery fire against Daesh in Syria and Iraq since 2014. Its activities in Syria are not authorized by the government of President Bashar Assad and the UN Security Council.

"As for Western rights protection groups, unfortunately, their contribution [to aid deliveries] was extremely insignificant. We noticed that, despite the intense blockade of Deir ez-Zor, which trapped women and children in, international organizations did not show their concern in this regard and ignored it," Muhammed Ibrahim Samra said.

The governor added that the Western organizations were more concerned over the reports about terrorists getting into encirclement across Syria than the problems of women and children blocked in Deir ez-Zor, which was populated by some 80,000 people during the blockade.

On September 5, Syrian government troops supported by the Russian Aerospace Forces lifted the years-long blockade of Deir ez-Zor maintained by Daesh. Syrian forces' operation on fully liberating the city from the militants is ongoing.

During the blockade, the city was cut off from allied forces, which were unable to break through the terrorist forces on the ground to deliver humanitarian aid to those in need in Deir ez-Zor. Thus, the only way to supply aid to the city under siege was by air. Helicopters of the Syrian army delivered food to Deir ez-Zor several times a day, and the Russian Aerospace Forces airdropped food and other necessities to the city from planes using parachute systems. Following the Russian humanitarian operation, the United Nations also launched food airdrops over the besieged city.

According to the governor, water supply networks in the area have been also significantly damaged, however, the issue of water supply, including drinking water supply, is expected to be solved in the coming weeks.

"The terrorist group have destroyed power stations and substations during the siege, including the Tayyim power plant [southwest of Deir ez-Zor], which was completely destroyed, and dozens of billions of Syrian pounds [dozens of millions of US dollars] are needed to restore the destroyed facilities. The networks are damaged in all areas… But we have started the restoration of electricity supply and the energy minister is in charge of this issue. The minister is engaged in the issue of installation of a mobile station in Deir ez-Zor, and this is an excellent decision," Mohammed Ibrahim Samra said.

Jihadists blew up one of the biggest water pumping stations in the Ayash area while leaving Deir ez-Zor, the governor added.

The governor of Syria's Deir ez-Zor province has also expressed gratitude in an interview with Sputnik to the Syrian and Russian authorities for their efforts in the liberation of the city from jihadists and humanitarian aid deliveries.

"First of all, through your agency, we would like to send words of gratitude to the Russian people and the leadership of the country, President Vladimir Putin, and also thank the heroes of the Russian army. The Russian authorities since the very beginning of the conflict and to this day has never backtracked from Syria… Contrary to the actions of the other side, who sent mercenaries to the Syrian land, finance terrorists and want to divide Syria," Mohammed Ibrahim Samra said.

The governor added that the Russian Aerospace Forces had played a crucial role in providing access for the land forces to break the blockade around Deir ez-Zor city.

"Foodstuffs and humanitarian aid through the Syrian Red Crescent were sent 24 hours after the decree of Syrian President Bashar Assad. Dozens of convoys with foodstuffs arrived. A trading company belonging to the Ministry of the Interior, also sent several convoys of vegetables and fruit, as well as with essential supplies," Samra said.