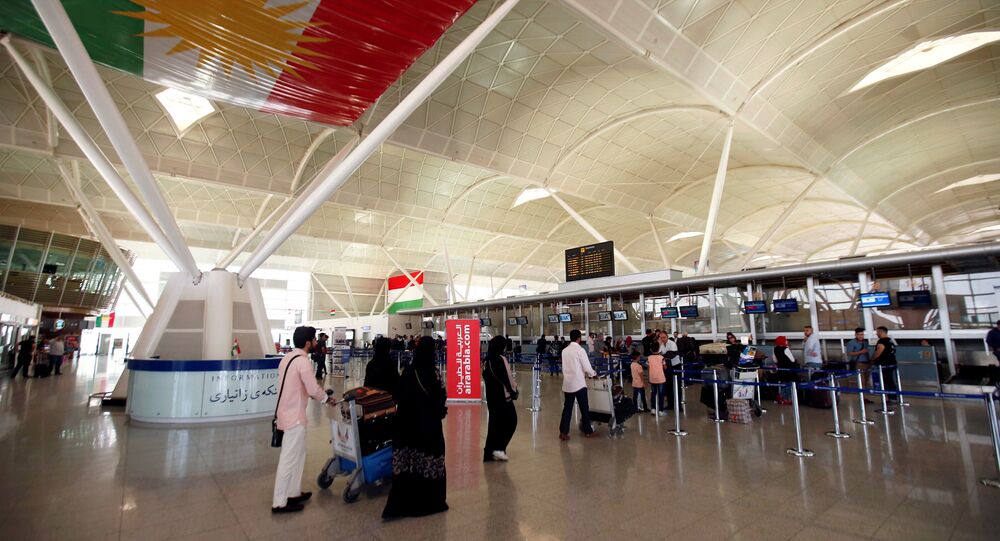 Baghdad’s decision to suspend all commercial flights to and from the Kurdish autonomous region will undermine the international military campaign against Daesh and the talks with Iraq's central government on how to implement the outcome of Monday’s independence referendum, a senior Kurdistan official said.

The order from the Iraqi government adds pressure to nullify the results of the September 25 plebiscite, in which 93 per cent voted to break away from Baghdad.
Qatar Airways, EgyptAir and Lebanon’s Middle East Airlines also informed passengers that beginning on Friday flights would be cancelled at the request of Iraq’s Civil Aviation Authority.

© REUTERS / Alaa Al-Marjani
'Blood Will Flow': Why Invasion of Iraqi Kurdistan May Result in Collapse of Mid-East
“The airports of Erbil and Sulaymaniyah serve Baghdad even more than they do us because they are being used by the Iraqi Army and the international coalition in the war with Daesh,” Kifah Mahmoud, a senior adviser to Kurdish Regional Government President Masoud Barzani, said.

He added that from a military standpoint the two airports are vital to the ongoing war effort because they are better equipped than the Baghdad airport and are closer to the front lines in Mosul and Kirkuk.

What will happen following the Iraqi Kurdistan independence vote?
Voted: 115
All polls
When asked to describe the situation in the region and on the border following Monday’s independence referendum and to comment on the ongoing joint Turkish-Iraqi military drills, Mahmoud said that such joint drills are regularly held, including inside Turkey, and that the number of Iraqi personnel involved there does not exceed a few dozen.

“Iraq and Turkey have invested billions of dollars in [the Kurdish autonomous region] and we have signed a number of economic, security and energy cooperation accords, so I don’t expect any military intervention by either of them,” Kifah Mahmoud continued.

In response to a question regarding why the Iraqi parliament was so quick to denounce Monday’s plebiscite even before it actually happened, he said that the Iraqi legislature is controlled by the State of Law bloc of Vice-President Nouri al-Maliki, which is governed by religious considerations.

“The State of Law imposes its agenda on the parliament in a bid to concentrate all power in their hands and squeeze out everybody else,” he noted.

We Want to Talk

Elaborating further, he said that the Kurdish regional government was ready to send a high-powered delegation to Baghdad to kick start the talks.

“That is, if the central government is prepared to accept it, of course. We are going to send delegations also to Iran and Turkey,” Kifah Mahmoud concluded.

The people of Kurdistan voted overwhelmingly for independence in Monday's referendum, with the final percentage of who voted yes exceeding 90 percent.

© Sputnik / Michael Klimentyev
Turkish President Considers Independence Vote in Iraqi Kurdistan Illegitimate
The referendum has raised alarm in Iraq's neighbors, Turkey and Iran, over concerns it could encourage their Kurdish minorities to break away.