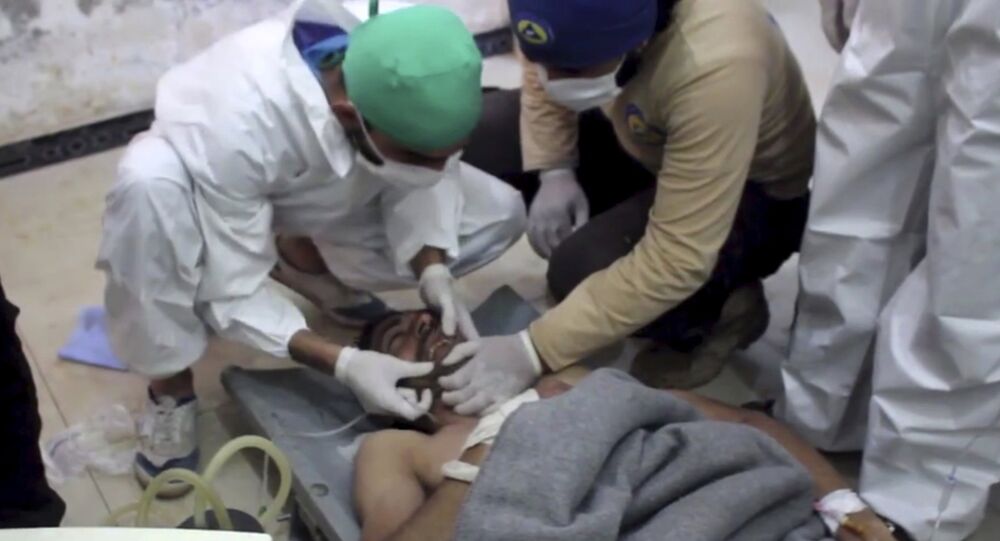 Russian diplomat Mikhail Ulyanov said Tuesday that the reason why a mission of the Organization for the Prohibition of Chemical Weapons (OPCW) hadn't inspected a Syrian village hit by a chemical attack in April is unclear, as the area is safe enough for such a visit.

MOSCOW (Sputnik) — Syria's village of Khan Shaykhun, a site of April's deadly chemical attack, is safe enough for an inspection mission of the OPCW to visit the area, Ulyanov, the head of the Russian Foreign Ministry's Department for Nonproliferation and Arms Control, said Tuesday.

Since the attack, none of the OPCW inspection groups visited Khan Shaykhun or the Shairat airbase, where the Syrian government allegedly stored the chemical weapons, over concerns of lack of security.

"The security conditions make a visit to the area possible. But the reason behind why they [OPCW] did not go to Shairat remains unknown," Uliyanov told a press conference.

© AFP 2020 / Omar haj kadour
A picture taken on April 4, 2017 shows destruction at a hospital in Khan Shaykhun in the northwestern Syrian Idlib province, following a suspected toxic gas attack.
The official stressed that Moscow was making significant contributions to the Khan Shaykhun investigation, putting all efforts possible into finding those behind the attack.

"We are following the situation very closely, taking part in the attempts to establish the truth. I can tell that today, the whole set of our data is objectively pointing at the terrorists. To all appearances, they set off a sarin explosive device on the ground with the aim of staging a provocation, as they knew that the blame will be put on Damascus," Ulyanov added.

The Russian Foreign Ministry official added that there was no evidence to support the version stipulating that the chemicals were dropped on Khan Shaykhun from the air, as the crater shows that it was a ground bomb. US military experts confirmed it, Uliyanov added.

Ulyanov also said that Russia's position on renewing the mandate of the UN-OPCW commission on the attack in Khan Shaykhun will depend on the report the group is expected to present on October 26.

"We hope that they will at least visit Shairat until then. We will study the report and, first of all, assess its quality, whether this is a serious investigation or a distant and superficial one once again. And then we will make conclusions," the official added.

Ulyanov said that given the quality of the report, Moscow will decide whether it is reasonable to renew the mandate, which expires mid-September.

© Sputnik / Valeriy Melnikov
Collateral Damage or Gas Attack? Why WH's Assad Accusations are Flawed
In late July, then acting Representative of Russia to the United Nations Pyotr Ilyichev sent a letter to UN Secretary-General Antonio Guterres, insisting that international experts should visit Khan Shaykhun and the Shayrat airfield to carry out an in-depth investigation of the attack.

The UN Security Council has discussed a new OPCW report on the incident in Khan Shaykhun in April, which confirmed the use of banned sarin gas in the village. The document was passed to a joint OPCW-UN commission, which should establish those involved in the chemical attack.

The April 4 attack on the village killed 80 people and hurt 200 others. A number of countries and international organizations claim that the attack was carried out by the Syrian government. The Syrian authorities said that they had never used chemical weapons against civilians or terrorists and that the nation's entire chemical arsenal had been destroyed under the control of the OPCW.