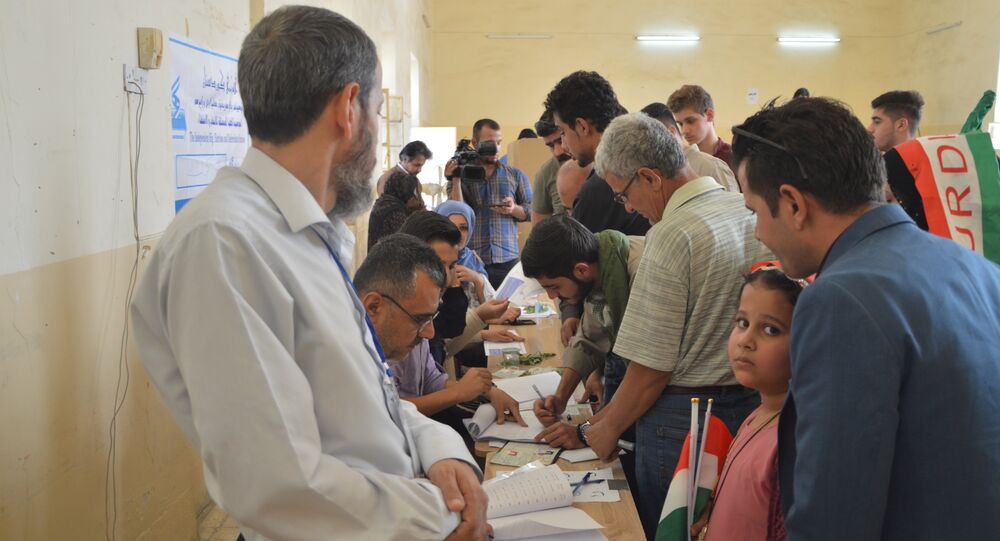 About 73 percent of eligible voters have already cast their ballots in an independence referendum, currently being held in Iraqi Kurdistan, local media reported Monday.

MOSCOW (Sputnik) — The polling stations opened earlier in the day not only in the autonomous region of Iraqi Kurdistan but also in the disputed areas officially controlled by Baghdad.

According to the Rudaw broadcaster, the city of Kirkuk, the administrative center of Iraq's Kirkuk province, which is not a part of the autonomous region, has also shown a large voter turnout.

© Sputnik / Hikmet Durgun
A voter casts a ballot during Iraqi Kurdistan's independence referendum. File photo
In the end of August, the authorities of the province of Kirkuk voted in favor of joining the vote for Iraqi Kurdistan's referendum. Baghdad has spoken out against the vote, questioning its legality.

Kirkuk Governor Najmaldin Karim told Sputnik in August that the province was an essential part of Iraqi Kurdistan and had a right to participate in the referendum. In September, the Iraqi parliament voted for the resignation of Karim, but the Council of the Iraqi northern province of Kirkuk voted against their decision and issued a statement saying that dismissing the government was the prerogative of the local authorities.

© REUTERS / Alaa Al-Marjani
As Iraqi Kurds Go to the Polls, Iran Warns Against 'Separatist Secession'
Baghdad and some foreign governments have voiced opposition to the referendum. Turkish Prime Minister Binali Yildirim said earlier in the day that Turkey, which also has a significant Kurdish minority living on its territory, would not go to war, but it would take measures to ensure its national security.

The UN Security Council has expressed its concern, claiming that the referendum might destabilize Iraq, which is still fighting the Islamic State terrorist group (outlawed in many countries, including Russia).

The decision to hold the independence referendum was made by authorities of Iraqi Kurdistan in June. Following the announcement, the Iraqi government, as well as a number of foreign countries, including Turkey and the United States, have criticized the move.