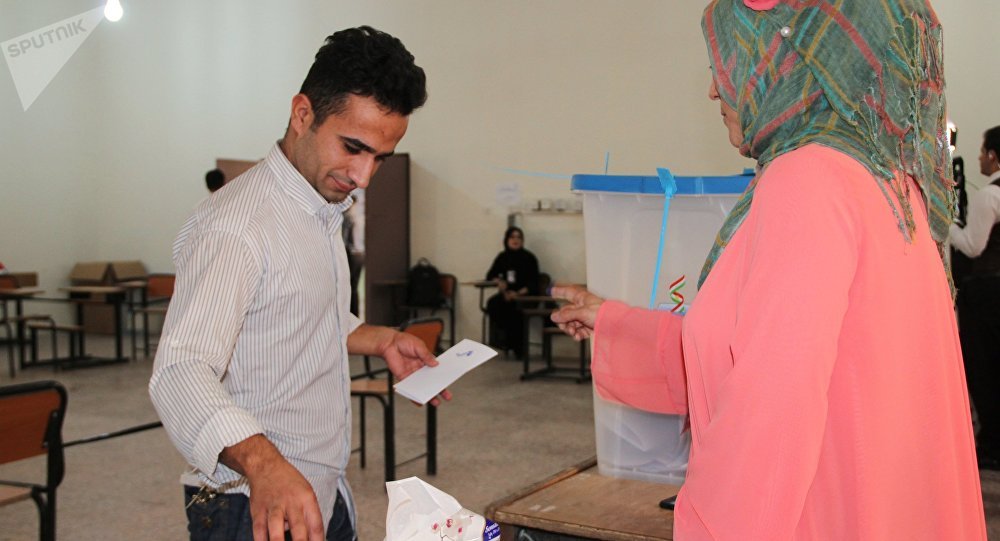 The residents of the city of Kirkuk, claimed by both the autonomous region of Kurdistan and the federal government in Baghdad, are taking part in the referendum on independence from Iraq on Monday despite growing tensions between the local authorities and the central government.

KIRKUK (Sputnik) — In the end of August, the authorities of the province of Kirkuk voted in favor of joining the vote for Iraqi Kurdistan's referendum. Baghdad has spoken out against the vote, questioning its legality.

The polling stations in Kirkuk, the capital of the oil-rich province of the same name, opened at 8 a.m. local time (5:00 GMT), the same time as throughout the autonomous region. Residents are filling the streets, many of them carrying Kurdistan's flags and heading for the polling stations. Many of them are wearing traditional clothing. People of all ages have come out to vote, both young and old, there are some families with children.

"Of course, we are happy, we will have a country of our own. We have been waiting for it for years, many have lost their lives in the fight for this moment," a woman named Ragda said.

© Sputnik / Dmitry Vinogradov
'Goodbye Sykes-Picot': Twitter Heats Up as Iraqi Kurds Vote to Create New State
The voting takes place only in the areas populated mostly by the Kurds. No polling stations have opened in the territory where Arabs or Turkmens live. Nevertheless, according to a local school director Lyaiki Mahmu, several members of the Turkmen's community have come to the polling station that she is overseeing.

"Yes, we want to be independent of Iraq, but without having any problems with it, without any tension, without offending our brothers, Arabs and Turkmens," the school's director said.

The city is quite calm, despite tension between Erbil and Baghdad. There are almost no people in the streets except those on their way to or from the polling stations, although the authorities have declared the day off to hold the referendum.

The province of Kirkuk has been under control of the Kurdish military forces, Peshmerga. A few days before the referendum the Kurdish forces have boosted their presence in the vicinity of the city. 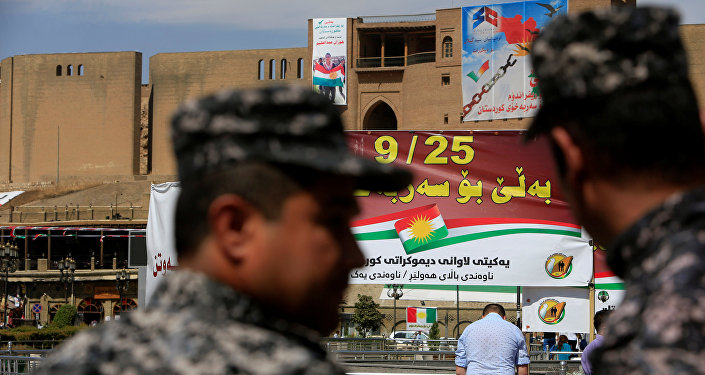 © REUTERS / Alaa Al-Marjani
As Iraqi Kurds Go to the Polls, Iran Warns Against 'Separatist Secession'
Kirkuk Governor Najmaldin Karim told Sputnik in August that the province was an essential part of Iraqi Kurdistan and had a right to participate in the referendum. In September, the Iraqi parliament voted for the resignation of Karim, but the Council of the Iraqi northern province of Kirkuk voted against their decision and issued a statement saying that dismissing the government was the prerogative of the local authorities.

Baghdad and some foreign governments have voiced opposition to the referendum. Turkish Prime Minister Binali Yildirim said earlier in the day that Turkey, which also has a significant Kurdish minority living on its territory, would not go to war, but it would take measures to ensure its national security.

The UN Security Council has expressed its concern, claiming that the referendum might destabilize Iraq, which is still fighting the Daesh terrorist group (outlawed in many countries, including Russia).