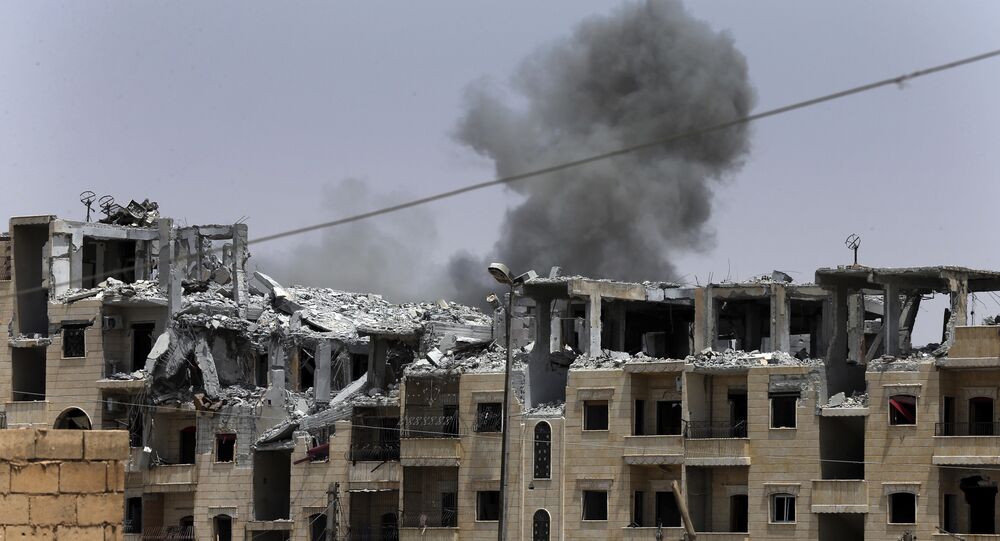 Human Rights Watch said in a report that the US-led coalition killed at least 84 civilians, including 30 children, when it carried out two airstrikes near Raqqa in March.

WASHINGTON (Sputnik) — The US-led coalition fighting Daesh terror group killed at least 84 civilians, including 30 children, when it carried out two airstrikes near Raqqa in March, Human Rights Watch said in a report on Monday.

"Two aerial attacks near Raqqa, Syria in March killed at least 84 civilians, including 30 children and raise concerns that US-led coalition forces fighting the extremist armed group Daesh (outlawed in Russia) did not take adequate precautions to minimize civilian casualties," Human Rights Watch said in a press release announcing the release of the report.

© AP Photo / Bilal Hussein
US-Led Coalition Jets Shot Down Syrian Combat Aircraft and UAV - Commander
The rights group said its conclusions were based on an on-the-ground investigation of the attacks in two towns west of Raqqa, one on a school housing for displaced families in Mansourah on March 20, and a second on a market and bakery in Tabqa on March 22.

Human Rights Watch discovered that fighters from Daesh were at both locations, but so were many civilians.

"The coalition should conduct thorough, prompt and impartial investigations of the attacks, do everything feasible to prevent similar attacks and provide compensation or condolence payments to people who suffered losses due to the coalition's operations," Human Rights Watch said.

The US-led coalition's Combined Joint Task Force has acknowledged that it struck the Mansourah school, but said it targeted what it believed was a headquarters and weapons storage facility for Daesh, adding that it thought no civilians were present.

The coalition has said it is still investigating allegations that its aircraft killed dozens of civilians in the Tabqa market attack.

"These attacks killed dozens of civilians, including children, who had sought shelter in a school or were lining up buy bread at a bakery," Human Rights Watch Deputy Emergencies Director Ole Solvang said. "If coalition forces did not know that there were civilians at these sites, they need to take a long, hard look at the intelligence they are using to verify its targets because it clearly was not good enough."

© AP Photo / Ihsanullah Majroh
US Airstrikes in Afghanistan Boom Under Trump: New Victims, No Efficiency
The Public Affairs Office of the Combined Joint Task Force – Operation Inherent Resolve (CJTF-OIR) told Sputnik that the US-led coalition in Iraq and Syria is looking into a report by an international watchdog about civilian deaths as a result of the two airstrikes.

"The Coalition is currently assessing these allegations. The CJTF-OIR September Civilian Casualty Report set to be released later next week will provide the current status of these allegations," the press office said.

International law requires all parties to a conflict to take precautions to avoid civilian casualties.

Human Rights Watch has documented previous coalition attacks on civilians in Syria, including a March 16, 2017 US airstrike on a mosque near al-Jinah, west of Aleppo, that killed dozens of civilians.