Shortly after sunset, the residents of Erbil, the capital city of Iraqi Kurdistan that seeks to gain independence from Baghdad by holding a referendum on September 25, raised thousands of suns, depicted on the flags of the autonomous region, to the sky.

The lyrics of all the songs were very similar.

"Yet we will proclaim our state, whoever is against it, but if they infringe on our right, they will deal with Peshmerga," one song's lyrics said.

Shanadar Park, located in central Erbil, as well as many other parks in Iraqi Kurdistan's cities, has turned into a place of overwhelming public celebration.

Young and old, women and men, attend such places every day in order to support the decision of President of Iraqi Kurdistan Masoud Barzani to hold the referendum on independence from Baghdad. 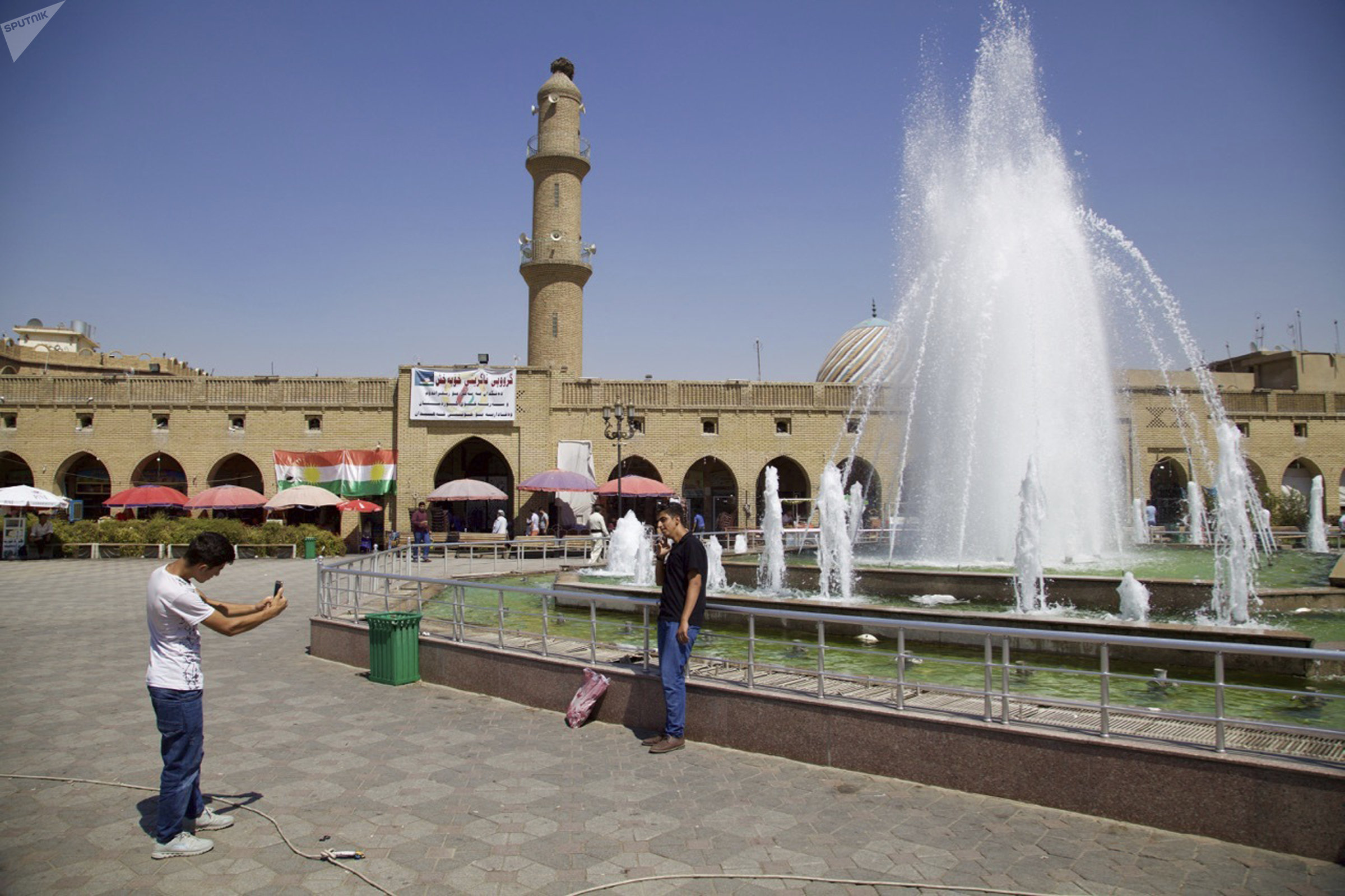 © AP Photo / Balint Szlanko
In this Thursday, Aug. 24, 2017 photo, young men take pictures outside Irbil’s citadel in front of a poster urging people to vote yes in the upcoming poll on Kurdish independence from Iraq

A group of young men with fancy hairstyles are trying to explain to a Sputnik correspondent the advantages of secession from Iraq.

"Kurdistan's economy will benefit from independence. We will finally get rid of unemployment and low salaries," a young man said confidently.

The question regarding threats of a blockade organized by neighboring Turkey and Iraq in the event of the vote only encouraged him.

"In this case, we will deal with them in the same manner. We will behave in a hostile way — we will respond in kind. Independence is the dream of our people, we will not abandon it," the man said.

However, the situation is not so obvious in the corridors of the local government. Delegation after delegation, both military and civil, from Washington, the United Nations, Berlin, Paris and Baghdad visit Erbil in an attempt to persuade long-standing Kurdish leader Barzani to abandon the "hasty decision" and at least to postpone the referendum. Barzani has said that he is not in a hurry at all, as the Kurds have been waiting for independence for almost a hundred years and now it is the right time for that.

Barzani's aide Kifah Sindjari says that the referendum can still be postponed but strong guarantees are necessary. According to him, the decision "currently depends on Washington, the United Nations and Baghdad," however, the divorce from Baghdad is inevitable.

"The required guarantees include signed consent to the setting of another date for holding a plebiscite in the very near future, respect for its results, the start of negotiations with the Iraqi side on the delimitation of borders, the discussion of the issue of water resources, as well as negotiations on disputed territories, including Kirkuk, Sinjar and other lands," Sinjari said.

According to him, the Kurdish government has no wish to trust Baghdad authorities anymore, as they do not treat the Kurdish Regional Government as an equal partner.

There are also those in Iraqi Kurdistan who do not support holding the referendum. They are not as plentiful as plebiscite supporters and they try not to talk about their position in order not to look unpatriotic. One of these people agreed to an anonymous interview.

"You know, I am not against the referendum, but I am afraid of the military intervention by Turkey in connection with the subsequent declaration of independence. After all, Turkish Kurds will try to follow our example. And even if Ankara does not send its army to Kurdistan, the economic blockade will undermine us," the interviewee said.

A Peshmerga veteran called Sarmat, who served in several armed conflicts on the side of the Iraqi army, calls such a position cowardly, adding that Iraqi Kurds "were under the Iraqi, the Iranian and Turkish blockade in the 1990s and gained invaluable experience."

"We have grass, black soil. We will be developing agriculture. The Turks will stop receiving our cheap oil and lose their huge investments in our region. Iran will no longer be able to illegally transport banned equipment through Kurdistan. So they will think a hundred times before taking such a reckless step," the interlocutor said.

In June, Barzani set September 25 as the date for a referendum on the independence of the autonomous region from Iraq. The announced referendum has been criticized by Iraq and a number of other countries. For example, Turkey and Iran expressed a common view that a referendum in Iraqi Kurdistan could provoke increased tensions in the region, including separatism among their own respective Kurdish populations, and called for the vote to be abandoned.