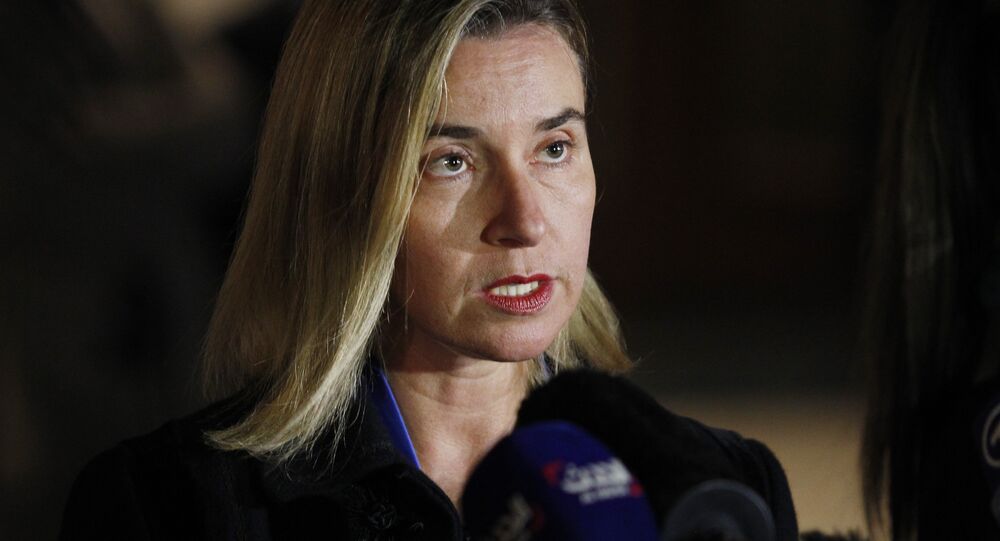 The EU foreign policy chief claims that there is no necessity to re-negotiate parts of the Iran nuclear deal, adding that all parties agree agreed that Iran fully complies with the accord.

UNITED NATIONS (Sputnik) – EU foreign policy chief Federica Mogherini said after talks at the UN that there is no necessity to re-negotiate the Iran nuclear deal which may have prevented a military intervention.

"We already have one potential nuclear crisis, we definitely do not need to go into a second one," Mogherini told reporters in New York on Wednesday. "This is an agreement that prevented a nuclear program and potentially prevented a military intervention. There is no need to renegotiate parts of the agreement."

Federica Mogherini added that the United States and all other stakeholders agreed that Iran fully complies with the Joint Comprehensive Plan of Action.

© REUTERS / Nazanin Tabatabaee Yazdi/TIMA
Iranian President Speaks About US Possible Withdrawal Nuclear Deal, Fight Against Terror
"We all agreed on the fact that there is no violation, that the nuclear program related aspects, which is all the agreement, are being fulfilled," Mogherini said. When asked if the United States agreed that Iran complied she said, "yes."

"No discussion on changes," Mogherini said Wednesday when asked if there were discussions by the United States or other countries regarding changes to the Iran deal sunset clause.

Mogherini noted that Issues that are out of scope of Iran nuclear agreement can be dealt with in various formats.

On Tuesday, President Donald Trump called the JCPOA, negotiated under President Barack Obama's watch "an embarrassment" to the United States during a speech to the UN General Assembly.

In July 2015, Iran and the P5+1 group of nations comprised of the United States, Russia, China, France and the United Kingdom plus Germany, signed the JCPOA. The agreement stipulates lifting of nuclear-related sanctions imposed on Iran in exchange for Tehran maintaining the peaceful nature of its nuclear program. The plan came into force on January 16, 2016.

Trump on Iran Nuclear Deal's Future: 'I Have Decided'

Iran 'Clearly in Default of Expectations' of Nuclear Deal - Tillerson