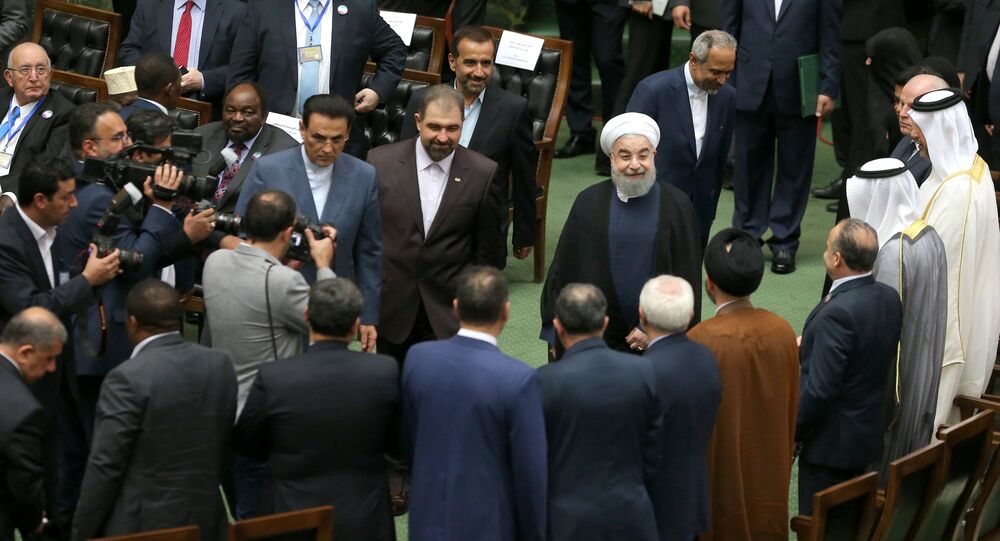 Iranian President Hassan Rouhani commented on the possible US withdrawal from the nuclear deal, saying that all countries would condemn it.

WASHINGTON (Sputnik) — The United States unlikely will abandon the international nuclear deal with Iran because such a move will be condemned domestically and globally, Iranian President Hassan Rouhani said at a press conference on the sidelines of the United Nations General Assembly on Wednesday.

If the United States abandons its own agreements, future talks with the country would be a waste of time, Iranian President Hassan Rouhani said.

"An American government that chooses to infringe on its legal and legitimate international commitments, a conversation with such a government would be a waste of time," Rouhani told reporters on the sidelines of the UN General Assembly.

Iran uses all of its power to conduct a serious fight against terrorism in the Middle East, Iranian President Hassan Rouhani said.

"All of our efforts are aimed at offering assistance to the region's people in order to fight terrorism. The Islamic Republic of Iran has practically shown that it is quite serious in the fight against terrorism, and it uses all of its power," Rouhani said at a press conference on the sidelines of the UN General Assembly.

Earlier in the day, the Daesh terrorist group shelled a humanitarian convoy in one of the central streets of Deir ez-Zor. The attack resulted in one of the drivers and at least four civilians were injured.

Previously, Brigadier General Amir Ali Hajizadeh, the Islamic Revolutionary Guard Corps (IRGC) Aerospace Force commander, had claimed that Iran has managed to assemble a massive non-nuclear ordnance, dubbing it the "Father of All Bombs." He also claimed that the IRGC has evidence of the US collaborating with Daesh.