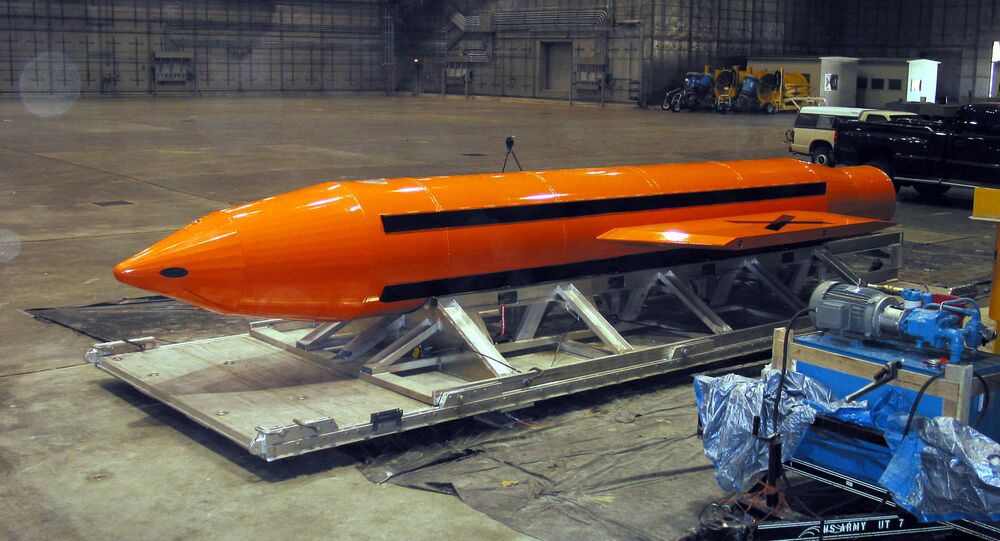 The "father of all bombs", which is on par with US-made non-nuclear ordnance of a similar class, is already in Tehran's possession, according to a top Iranian Islamic Revolution Guards Corps (IRGC) commander. He also claimed that the IRGC has evidence of the US collaborating with Daesh.

"Following a proposal by the Aerospace Force of the Islamic Revolution Guards Corps, Iran's Defense Industries Organization manufactured a 10 (metric) ton bomb; these bombs are at our disposal, can be launched from Ilyushin aircraft and are highly destructive," Iran's state news agency FARS quoted Ali Hajizadeh as saying.

© REUTERS /
Why US 'Mother of All Bombs' Strike is 'Political Challenge'
He described the IRGC's weapon as the "father of all bombs," comparable to Washington's GBU-43/B Massive Ordnance Air Blast (MOAB) highly destructive bomb, the largest non-nuclear explosive device ever developed by the United States and widely referred to as the "Mother of All Bombs."

Separately, General Hajizadeh claimed that the IRGC had obtained information about the US military command 's support for Daesh (ISIS) terrorists.

"We have documents showing the behavior of the Americans in Iraq and Syria; we know what the Americans did there; what they neglected and how they supported Daesh," he was quoted by FARS as saying.

Hajizadeh made it plain that if these documents are made public, it would result in "more "scandals for the US," according to FARS.

In April, the US military dropped the 22,000-pound (9,800 kg) MOAB bomb in Afghanistan's Nangarhar province, targeting a tunnel complex which, according to the US Central Command, was used by the Daesh terrorist group's local affiliate.

The devastating weapon had not been used in combat before the Nangarhar operation, where it killed 92 Daesh terrorists.

© Flickr / Day Donaldson
Alleged US Evacuation of Daesh Field Commanders: 'We Are Rescuing Our Allies'
Russia has its own non-nuclear munition that dramatically exceeds the American "Mother of All Bombs," both in terms of destructive power and blast radius.

Earlier this year, the Russian online newspaper Rossiyskaya Gazeta reported that in contrast to the GBU-43, conventional ordnance filled with large number of explosives, the Russian bomb is a thermobaric weapon with a destructive power four times that of the MOAB.

Russia's "Father of All Bombs" was successfully field-tested in 2011, after being dropped by a Tupolev Tu-160 strategic bomber.

World Questions Trump’s ‘Mother of All Bombs’ Strike, But Site Has Few Answers