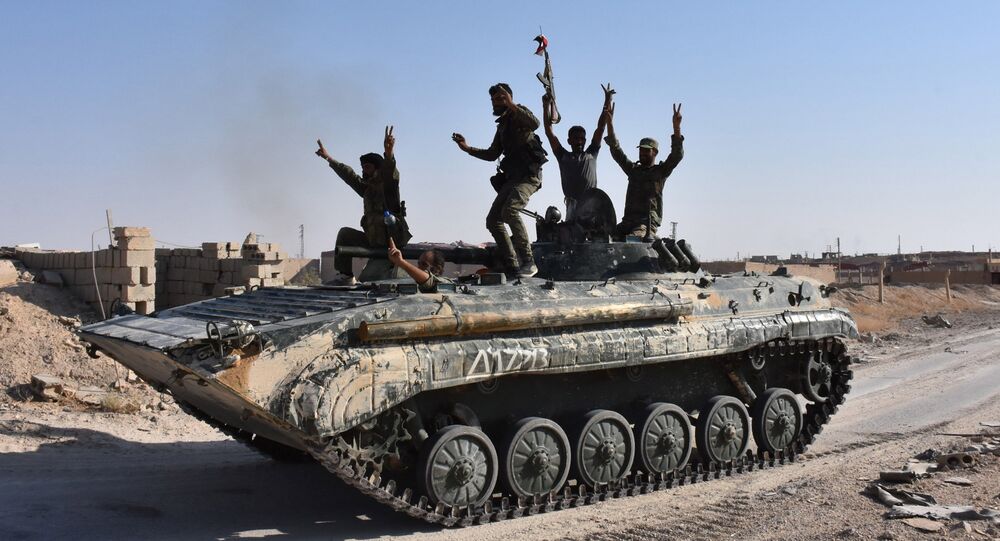 Russia's presidential envoy for Syria has commented on the Syrian peace talks currently underway in Astana. He said he believes that Daesh terrorists in the country would be defeated soon due to the Syrian army's successful operation to free Deir ez-Zor, which resulted in the lifting of the three-year blockade of the city.

ASTANA (Sputnik) — Moscow hopes that the fight against terrorists groups in Syria will be over in the coming months, the head of Russian delegation at Astana talks, Alexander Lavrentyev, who also serves as Special Presidential Envoy for Syria, told reporters during Astana talks on Syria.

"In the past moths, there have been very positive developments on the ground, the Syrian government forces liberated Deir ez-Zor and successfully continue attacks on positions of the Islamic State [IS, Daesh, ISIS terrorist group, outlawed in Russia]. We hope that in the coming months the fight against these terrorist groups, including those supporting the IS, will be completed, and we will be able to talk about the need to fight against other groups, which pursue the overthrow of the current government in Syria," Lavrentyev said.

He pointed out that Russia was seeking a peaceful solution to the political crisis in Syria.

"But once again we hope that the opposition has common sense and that it will pursue a peaceful solution to the existing problems, search for common ground with the government on the issue," Lavrentyev said.

© Sputnik
In Deir ez-Zor Trenches: Syrian Army Attacks Daesh Positions
Last week marked the lifting of the three-year Daesh siege of the city of Deir ez-Zor and the liberation of a local airfield, which had kept more than 1,000 Syrian troops locked in since January. However, the fighting to fully liberate the area is still underway.

However, the operation to fully liberate the city of Deir ez-Zor and surrounding area from Daesh terrorists conducted by the Syrian army with the assistance of Russian warplanes is still underway. Earlier in the day, Russian submarines launched a strike on Daesh targets in the city with Kalibr cruise missiles to help fully free Deir ez-Zor.

When commenting on the Astana-6 talks on the Syrian settlement, the Russian envoy said that the Syrian ceasefire guarantor states — namely Russia, Iran and Turkey — are ready to consider the participation of other countries in military policing of the safe zones in the country.

"Observers, we are talking about the units of the Russian military police, which are already deployed in a number of areas of the de-escalation zones. They will be deployed also in the Idlib area, as they are now being deployed in the region of Homs and Eastern Ghouta. If there would be proposals from other countries on the use of their military contingents in the military police, we, representatives of the guarantor states, will consider them."

He also said that the parties to Astana talks on Syria are "close" to finalizing an accord on the creation of four de-escalation zones, in particular in the country's northwestern province of Idlib, which is set to be observed by Russia, Iran and Turkey. Moreover, a commitee may be established to oversee the implementation of the ceasefire in safe zones.

© AFP 2021 / Mohamed al-Bakour
All Eyes on Idlib at 6th Meeting on Syria in Astana
The main issue on the agenda of the Syrian peace talks in Astana is the creation of the fourth and last Syrian safe zone in the Idlib province. In July, Russia, Turkey and Iran, with help of Jordan and the United States as observers, tried to coordinate a whole range of specifics on the establishment of the four safe zones, but could not agree on all the details and sign the package of documents as a whole.

The Astana meeting comes just after Russian Foreign Minister Sergei Lavrov's visits to Saudi Arabia and Jordan, where de-escalation on Syria presumably was on top of the agenda.

Lavrentyev said that new observer nations to the Astana talks on Syria may be invited.

"The Astana process is based on the work of the three guarantor states — Russia, Turkey and Iran. It will be possible to consider other countries’ candidacies for the position of observers, among them such actors like China, the United Arab Emirates, Egypt, Lebanon, if we receive their requests. We very carefully examine if a country meets criteria necessarily to let it act as an observer", Lavrentyev said.

© AFP 2021 / STANISLAV FILIPPOV
New Kids on the Block: China, Egypt, Iraq, UAE May Become Observers in Syria Peace Process
Commenting on the Astana-6 talks, he said that the results of the negotiations may be formalized within a UN Security Council (UNSC) resolutio, depending on the desire of the international community to support their outcome.

"At this point several members of the international community do not want to see Iran in this process, that is why there is only a slight problem — to recognize the right of Iran to participate in the Syrian peace settlement, in the restoration of the destroyed economy and infrastructure of this country," the official concluded.