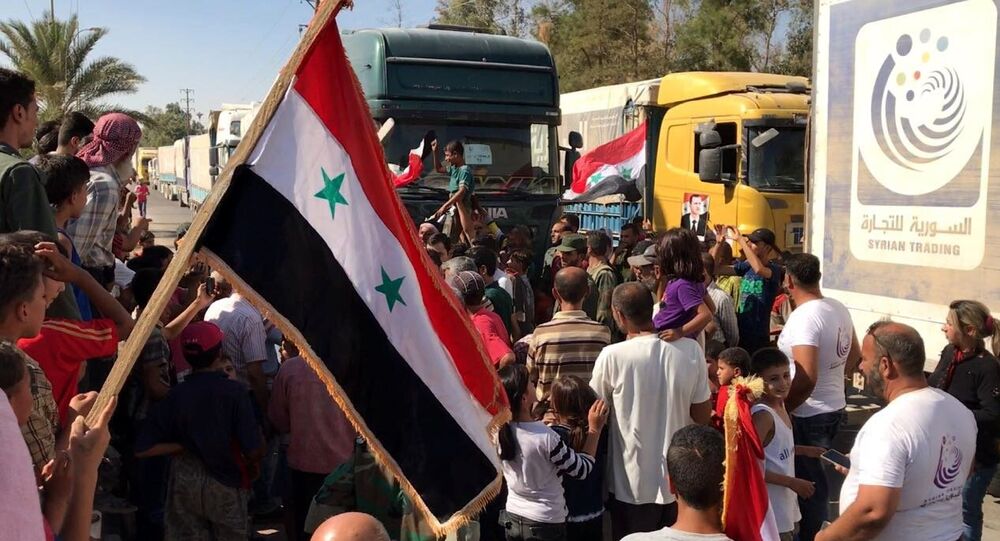 The residents of Syrian city of Deir ez-Zor are greeting the 5th corps of the Syrian army with flags and portraits of the country's President Bashar Assad after they overran the positions of Daesh at the main southern entrance to the city, a Sputnik correspondent reported Sunday, adding that it is a third major victory within a week.

DEIR EZ-ZOR (Sputnik) — According to the correspondent, Syrian government troops and their allies have been marching to Deir ez-Zor along the main road from the city of Palmyra via the town of As Sukhnah.

Last week, the road was mined and the area was under control of Daesh militants.

© AFP 2021
WATCH: Syrian Army Drives Daesh Terrorists From Deir ez-Zor Province (VIDEO)
On Tuesday, the Syrian troops broke the blockade to the west of the city in the area where the 137th mechanized brigade was located. The lifting of the blockade in the west of the city allowed civilians to receive humanitarian aid from the Syrian government and International Committees of the Red Cross and Red Crescent.

On Saturday, the Syrian army supported by Russian Aerospace Forces broke the siege of the airfield, which had kept more than 1,000 of Syrian troops locked in since January.

The residents congratulated each other on the victory until late night waiting for the arrival of servicemen from the airfield.

© REUTERS / Social Media Website
Daesh Shells Deir ez-Zor Days After City's Siege Lifted - Reports
According to Deir ez-Zor's governor, with the opening of land communication line, the convoys with food and fuel would arrive in the city on a daily basis.

The operation to clear the province from terrorists is still underway.

Daesh had been maintaining the blockade of Deir ez-Zor since 2014, with food and other supplies could only be delivered by helicopters. The terrorist group also gained control over a large part of the province of Deir ez-Zor and cut off roads to government-held districts.