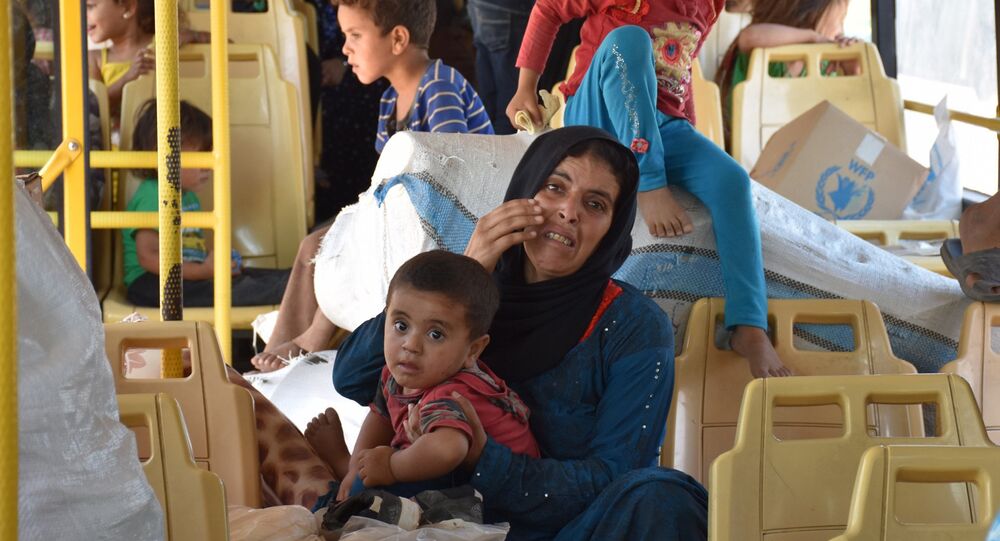 According to a representative of the Russian Center for the Reconciliation of Opposing Sides in Syria, over 50 families have returned to their homes in the district of Afrin in Syria's northern Aleppo province.

ALEPPO (Sputnik) – Over 50 families have returned to their homes in the Kurdish-held enclave of Afrin in Aleppo province after being forced to flee the area several years ago amid brutal military clashes, Viktor Frolov, a representative of the Russian Center for the Reconciliation of Opposing Sides in Syria told Sputnik Friday.

"As a result of the efforts of the Russian Center for the Reconciliation of Opposing Sides in Syria, certain agreements, which allow civilians return to the inhabited areas of the district of Afrin, have been reached. Over the last few days, 51 families have returned to their homes. Among them, five families returned from the Jibrin refugee camp to the city of Ahras," Frolov said.

The official added that the servicemen of the Russian reconciliation center also handed out 200 school backpacks filled with school supplies and over 1,100 pounds of medication to the Afrin residents.

Earlier in the day, Russian military police Lt. Col. Georgy Petrunin told Sputnik that police units have established observation posts in the Afrin district to ensure the ceasefire in the area is observed by the parties to the conflict.

"The personnel of the post observe the ceasefire regime. The observation is carried out toward the contact line with the enemy. As of today, our servicemen guarantee that the reconciliation process continues here [in the Afrin district]… Over the last days, [we have registered] the return of some three to five families, who, so to say, trusted us and headed home. After the Russian military police came [to the area], the people started to believe that the reconciliation process goes on," Petrunin said.

© AP Photo / Hassan Ammar
Local Residents Return to Syrian Southern Zabadani City Due to Ceasefire in Area
The official added that the local residents did not fear the Russian military police and welcomed their presence in the region.

In May, the guarantor states of the Syrian ceasefire — Russia, Turkey and Iran — signed a memorandum on the creation of four de-escalation zones in Syria. Two of them are already operating effectively, while in late July, representatives of the Russian Defense Ministry and moderate Syrian opposition had reached an agreement on the establishment of the third safe zone in the northern part of the Syrian Homs province. Consultations on the fourth safe zone in the Idlib province are underway.

The nationwide ceasefire in Syria came into force on December 30, 2016. The initiative has been supported by UN Security Council resolution.

The civil war between the Syrian government forces and various opposition and terror groups has been raging in the country since 2011.