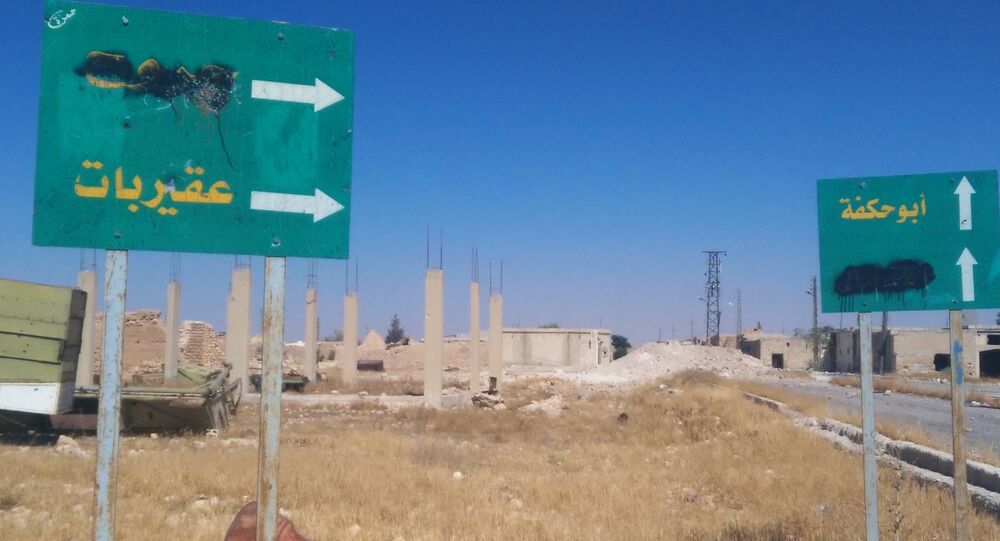 As Russian jets destroyed some 1,000 terrorists and enabled the Syrian Army to reclaim Akerbat, the government forces will engage in street fights to squeeze the last pockest of resistance, a military expert told Sputnik.

With 27 tanks and armored vehicles and 48 pickup trucks mounted with heavy weapons also destroyed by Russian airstrikes, the Syrian government forces are preparing to engage the militants in heavy street fightings in Akerbat.

"Daesh terrorists concentrated significant reserves of weapons, ammunition, food and medical supplies in this fortified area, preparing for a long siege. The terrorists were divided in this area and they are being defeated in sections," Sergei Rudskoi told Sputnik.

© Sputnik / Dmitriy Vinogradov
Russian Warplanes Eliminate Over 1,000 Terrorists in Syria's Akerbat Op – MoD
He added that the Syrian forces were now mopping up areas west and north of Akerbat, blocking the escape routes for the terrorists to leave and regroup.

During the liberation of Akerbat, terrorists used a record number of suicide attackers.

"Every day, from 15 to 25 militants with suicide belts as well as 4-5 explosives-packed inside ”jihadmobiles” were destroyed. All routes into the city were mined," the commander of the Russian forces in Syria said.

Over the past two weeks the Syrian Army and its allies have achieved a series of decisive victories over Daesh in the eastern and central parts of the country, breaking the longtime siege of the major terrorist stronghold, of Deir ez-Zor.

In a separate interview with Radio Sputnik, military expert Konstantin Sivkov said that the loss of more than 1,000 men in Akerbat was a critical blow to the estimated 20,000 jihadist militants still fighting in Syria.

“This means that our reconnaissance capabilities there are top-notch and that the agents working on the ground are providing accurate locations of key enemy installations hidden deep inside underground tunnels,” Sivkov said.

He said that the Russian Aerospace Forces use various types of weapons against these underground tunnels.

© AFP 2020 / Kobajjep
Deir ez-Zor Siege Finally Broken: A Story of Courage and Heroism Rarely Matched
“When dealing with shallow tunnels, we can use regular bombs, Kalibr cruise missile warheads or small caliber bombs. Deeper tunnels necessitate the use of 500 or 1,500-caliber guided bombs that ensure a complete destruction at depths of up to 50 meters,” Sivkov continued.

He mentioned the great deal that still needs to be done by the Syrian army to flush out the terrorists still fighting in Akerbat.

“They will have to smoke them out. City battles are the most difficult type of warfare, but I think that the government forces currently deployed there are combat-hardened and significantly motivated enough to get the job done. Besides, they will be backed by Russian aviation with high-precision weapons ideal for use in the city,” Sivkov said.

“I still believe that it is artillery, not aviation, that will play the main role in liberating Akerbat,” he added.

The Akerbat operation is part of the Syrian army’s ongoing effort to deliver a strong body blow to Daesh in central and eastern Syria.