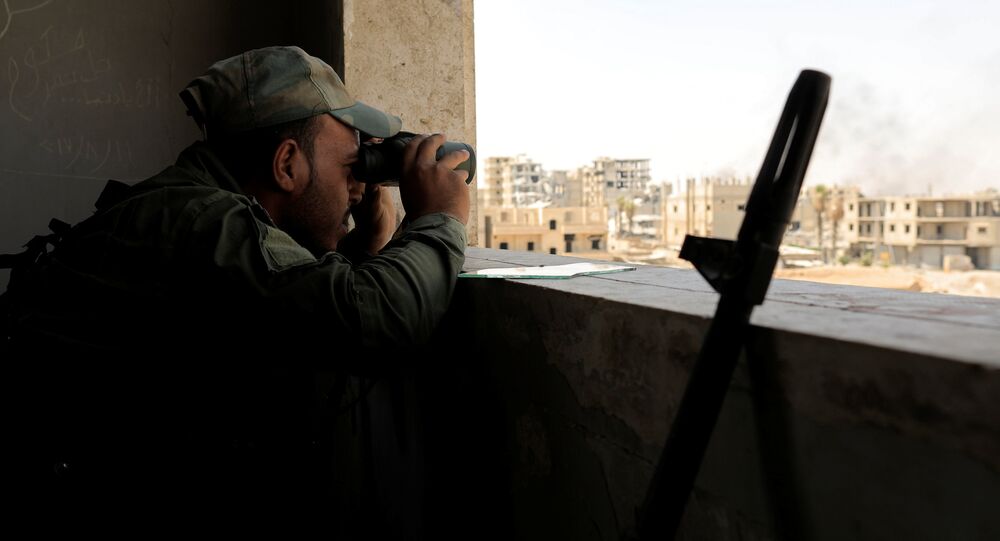 As the Syrian Democratic Forces assisted by US-led coalition warplanes continue to pound the Daesh-controlled Raqqa, the civilian population trapped in the city desperately clings to life amid the fighting and indiscriminate airstrikes.

The residents of Raqqa struggle to stay alive just as their city is almost literally being torn apart from the clashes between Daesh (ISIL/ISIS) terrorists and the Syrian Democratic Forces (SDF), and perpetual bombing by US-led coalition aircraft.

As of today about 20,000 innocent civilians remain trapped in the besieged city, many of whom are looking for any opportunity to flee the warzone.

Many of those who manage to escape the city end up at a refugee camp near Ayn Isa village located in the northwestern part of the Raqqa province. A Sputnik Turkiye correspondent managed to interview some of these survivors who relayed their horrific experiences of being trapped in a city being decimated by fighting.

Ebu Ali, one of these survivors, said that he and his family started to stockpile food supplies as soon as they learned that the SDF was about to besiege Raqqa.

"We wanted to leave the city, but Daesh didn’t allow us to do it. The terrorists cut off all routes out of the city for civilians, so we had to stay at home. Daesh used civilians as human shields, as the terrorists told us that US aircraft and Kurdish self-defense squads won’t attack residential buildings," Ali said.

He added that the terrorists called YPG-controlled areas "the land of infidels" and declared that Raqqa residents must not leave the territory of “the Islamic state.”

Meanwhile, the US-led coalition warplanes have continued their bombing campaign of the city, including the Mansura district where Ali lived.

"Many civilians were killed during those attacks. The airstrikes were launched mostly against Daesh forces, but those attacks also often hit the districts where there were no terrorists. One of those attacks claimed the life of my uncle’s son," he said.

Getting out of the city however was virtually impossible as the roads out were booby trapped and Daesh snipers were constantly hunting for civilians trying to make a run for it.

"It was very hard to survive during those clashes, as we had to stay without food and water for days. Finding water was very difficult. Back then we didn’t think we would survive," Ali said.

"Daesh terrorists raided people’s homes. They took all our food, even the dry milk we fed our child with. We were so terrified that we couldn’t put up any resistance. Due to the fighting we had to stay at home for days without food and water. We were also afraid of airstrikes because coalition warplanes bombed hundreds of residential buildings indiscriminately, hitting areas where there weren’t any terrorists," Ibrahim said.

He also said that the terrorists banned the civilians from watching TV, listening to music, using Internet and smoking, and have confiscated all TV antennas in the city so that the people wouldn’t be able to learn about the status of the siege.

Dying in a Crossfire

Resit Abdi, who used to live in Raqqa’s Old City, said that he and his children had to hide at home when their district was constantly hammered by the clashing combatants.

"One of my children was killed and two were injured when a rocket hit our house. And due to the fighting we weren’t able to immediately take them to hospital," he said.

According to Abdi, trying to leave Raqqa was suicide as the Daesh terrorists arrested and killed everyone who attempted to flee the city.

"Every day we were a hair’s breadth away from death because of the constant fighting and the coalition’s indiscriminate airstrikes. When the terrorists were driven from our district we managed to escape to SDF-controlled territory and flee the city," Abdi said.