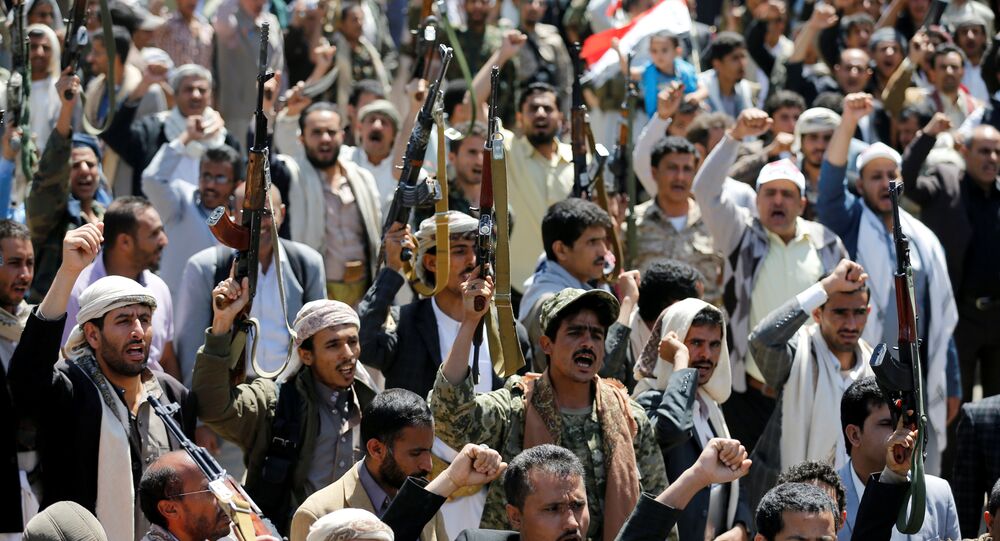 A new report from the Norwegian Refugee Council has estimated that 10,000 residents of the Yemeni capital of Sana’a have died from preventable illnesses as a result of a Saudi Arabian blockade depriving the citizens of medical care. Radio Sputnik’s Loud & Clear discussed the blockade and the larger significance of the Saudi presence in Yemen.

Host Walter Smolarek was joined by Alexander Mercouris, editor-in-chief of The Duran, a UK-based outlet that describes itself as "a conservative news-media platform that advances a realpolitik position."

The 10,000 preventable deaths are "a huge atrocity, it is one that is barely reported, it is a horrible dirty war that is being fought in Yemen," Mercouris said. "The people who are prosecuting the war are the Saudis who have put together a whole coalition of states that are trying to impose their will on Yemen."

"I don't think there's any justification, legal or moral, behind it whatsoever. And the Western powers… are turning a blind eye to this disaster which, you can see from the report that you have just read, has a huge humanitarian dimension."

The Yemeni conflict has been relatively uncovered by Western media compared to the Syrian Civil War, Mercouris says, because groups opposed to the West (the Syrian government of Bashar al-Assad, Russia, Iran) are involved in the fighting in Syria while Saudi Arabia, a US ally, is the primary foreign actor in Yemen.

"We don't criticize what our allies do in Yemen even though what they're doing is actually terrible. But we do criticize to an extraordinary degree what our enemies, or the people we say are our enemies, do in a place like Aleppo," Mercouris said, referring to fighting there that has led to more than 30,000 deaths since 2012.

Mercouris then went on to explain that the Saudis did not enter Yemen in 2015 expecting a multi-year war. "Saudi Arabia is a much bigger country than Yemen, an immeasurably bigger country, a richer country and by some estimates it has the third highest military defense budget in the world," he said. "So Yemen, which is a desperately poor and very divided country, was supposed to be an easy war for the Saudis to fight. What they found instead was that there was far more resistance to them in Yemen that what they anticipated. They have failed to capture the capital of Yemen, which is Sana'a, which is still controlled by the people they're trying to defeat."

The war got nastier as the Saudi situation quickly deteriorated, Mercouris said. The Saudis are now "taking out their anger and frustration on the people of Yemen by doing some of the things that we've been talking about, like basically closing the airport in Sana'a, denying people the opportunity to get medical care, increasing bombing, doing all the various other things that have been happening in this war, and it is getting worse."

Worse for the Saudis, the Houthi militia groups that they're opposed to have begun to strike at the southern provinces of Saudi Arabia with missiles, and disaffection with the war is spilling over into the bordering Saudi provinces. "What we are basically seeing is a conflict that is spiraling out of control. There is no sign of any attempts to resolve it diplomatically, there are no talks of any substance going on between the two sides," Mercouris said.

The Saudi rationale for their presence in Yemen, according to Mercouris, is to counter the specter of Iran in Yemen. "Now, I have to say I am extremely skeptical about that," Mercouris added, before saying that the converse may have become true: the Saudi presence may have strengthened Iran's ties with the Houthis. "When people are being attacked in Yemen, like the Houthis are, by Saudi Arabia, they inevitably tend to look at the one powerful country that might provide them with some support."

"Having said this, it's important to say that the extent of Iranian help to the Houthis is very disputed. Some recent reports suggest that this is more diplomatic and information war terms that the Iranians support them propagandistically, rather than provide them with actual weapons. This is a highly armed society anyway. It is a tribal society where people are accustomed to carrying arms. There is a large number of weapons there already."

"There are factions of what used to be the old Yemeni army which have aligned themselves with the Houthis," said Mercouris — including President Ali Abdullah Saleh, a former Saudi ally. Saleh is "now making common cause with the Houthis against the Saudis, who are claiming that the forces that they support are actually the legitimate government… [the Saudis] are using these internal politics and these long-standing divisions, which have existed in Yemen for a very long time, in their own interests."

But this strategy is backfiring, in Mercouris' opinion. "What they are doing, though, is they are actually consolidating large parts of Yemen's society against them. It's perhaps important at this point to say that there is a very long history of bad relations between the Yemeni people and the people to the north of them, in what is now Saudi Arabia. A history that actually goes back centuries and which this conflict has intensified. So there are sections of the army, sections of the bureaucracy, which are actually coming to fight against the Saudis. Conversely, there is always been a strong al-Qaeda element in Yemen which tends to identify with people of the north. It is in de facto alliance with Saudi Arabia."

Smolarek concluded the interview by asking about the role of Western powers, such as the United States, in the Saudi presence in Yemen. He asserted that the Saudis would have secured the approval of Washington before invading, which Mercouris agreed with.

"The US has been assisting the Saudi War in Yemen, as have the other Western powers. They continue to supply arms to Saudi Arabia, they continue to provide intelligence to Saudi Arabia, they have supported the Saudi conflict in Yemen diplomatically. And, of course, the US has sent special forces in Yemen. It carried out a raid there, Yakla, which went catastrophically wrong. It's been involved in the conflict, actually quite openly, on the Saudi side ever since it started."

"The fact that [the West is] effectively assisting Saudi Arabia in this conflict means that they are also part of that conflict and are colluding with the humans rights violations and the human rights disaster."