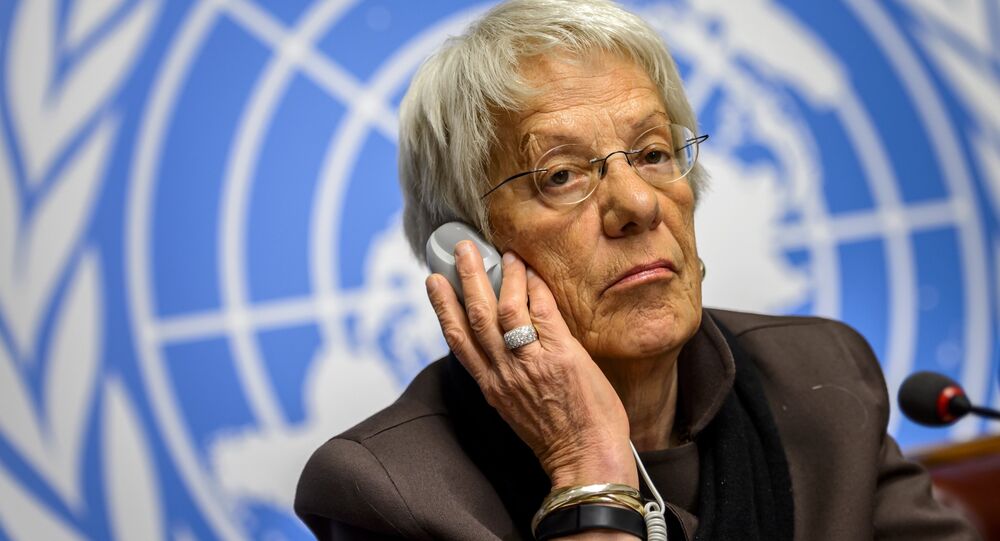 Swiss investigator Carla del Ponte decided to quit the UN Independent Commission of Inquiry on Syria because the Western countries who appointed her couldn't face up to her conclusions that the Syrian opposition were not the "good guys" they were being made out to be, Serbian analyst Goran Petronijevic told Sputnik.

"We have had absolutely no success. We've been faced with brick walls for five years," del Ponte told Blick, blaming the commission’s ineffectiveness on a lack of support from the UN Security Council.

"I cannot be a member of this commission, which does not do anything." She described her role as an "alibi investigator without political support."

"I give up, the States of the Security Council do not want justice," del Ponte complained.

The Syria commission was set up in August 2011, tasked with investigating all alleged violations of international human rights law in Syria since anti-government protests began in March 2011. In September 2012, Del Ponte joined the commission.

She told the Swiss newspaper that the crimes reported in Syria are even worse than those she was informed about in Rwanda and Yugoslavia.

"Believe me, such terrible crimes as are being committed in Syria I saw neither in Rwanda nor in Yugoslavia."

© AP Photo / Matt Dunham
If Tony Blair Can't Be Prosecuted for War Crimes Then No One Can
Del Ponte blames both the Syrian government and the opposition for violating human rights.

"In the beginning, there was good and bad. The opposition was good and the government was in the role of the bad."

"At first there was good and bad: the opposition on the side of good and the government in the bad role," Del Ponte told Blick.

However, after six years of investigation the investigator thinks that "everyone in Syria is on the bad side."

"The Assad government has perpetrated horrible crimes against humanity and used chemical weapons. And the opposition is now made up of extremists and terrorists."

Pro-government forces have admitted that around the same time as the alleged attack, they carried out an airstrike on a weapons depot close to the town in which Salafi-jihadi groups were storing chemical weapons.

In 2013, del Ponte herself said there were "strong, concrete suspicions" that opposition groups had used chemical weapons, specifically the nerve gas sarin.

© AFP 2020 / Omar haj kadour
Why US Could Be in Hot Water After CIA Remarks on Idlib Chemical Incident
Following allegations that government troops carried out a chemical attack in Ghouta in August 2012, the Syrian government signed the Chemical Weapons Convention and handed over its chemical weapons stockpiles for destruction.

Boris Dolgov, senior researcher at the Russian Academy of Sciences' Center for Arab and Islamic Studies, told Radio Sputnik that the Western countries who wanted to set up the commission in order to blame Assad for war crimes in Syria have been frustrated.

"Del Ponte's statement can be regarded as recognition of reality: that this commission now seems unnecessary. That's because if you investigate crimes committed in Syria, according to the documentary evidence, first you have to investigate the crimes of Daesh and those who cooperate with Daesh, including members of the opposition."

"She expected the same effect as in Yugoslavia. That is, that the opposition will win and the Syrian leadership like [former Serbian President Slobodan] Milosevic will end up in the dock. But that didn't happen, President Bashar Assad is still in office with the support of the majority of the population. More and more world leaders, including Western ones, are saying that a final solution to the Syrian crisis can be only political – that is, with the participation of the current leadership."

© AFP 2020 / ANDREJ ISAKOVIC
Serbia to Sue NATO Over Damage Caused by 1999 Bombing of Yugoslavia
Del Ponte found the situation on the ground in Syria to be different to what she had been led to believe, Serbian legal expert Goran Petronijevic told Sputnik.

"As a rule, people working in such UN commissions do everything under the control of the US administration. When they need to establish any facts, they get tasked with a 'project.' People like Carla Del Ponte were sent to Syria with the preconception that the forces of Bashar Assad are the 'bad guys.' But Carla Del Ponte has enough experience, she already made a mistake once, when she made allegations only against Serbs at the ICTY."

"However, then she went through a kind of purgatory, after she left the post of chief prosecutor she wrote a book called, 'The Hunt: Me and the War Criminals.' This book also deals with crimes against Serbs and the trading of Kosovo Serb's organs, which was controlled by the current President of Kosovo, Hashim Thaci. Thus Del Ponte, although late, shook the West's conviction that only the Serbs were 'bad guys' in the Yugoslav conflict."

"I think in Syria, she quickly realized that the project the commission was tasked with – to blame Assad's forces and call the others 'good guys' – does not correspond to the true state of affairs. It is possible that, given her reputation in the West, Carla del Ponte's name will now be used to point out the necessity of creating an ad hoc tribunal for Syria, according to the Yugoslav model, which Russia will probably be against," Petronijevic said.