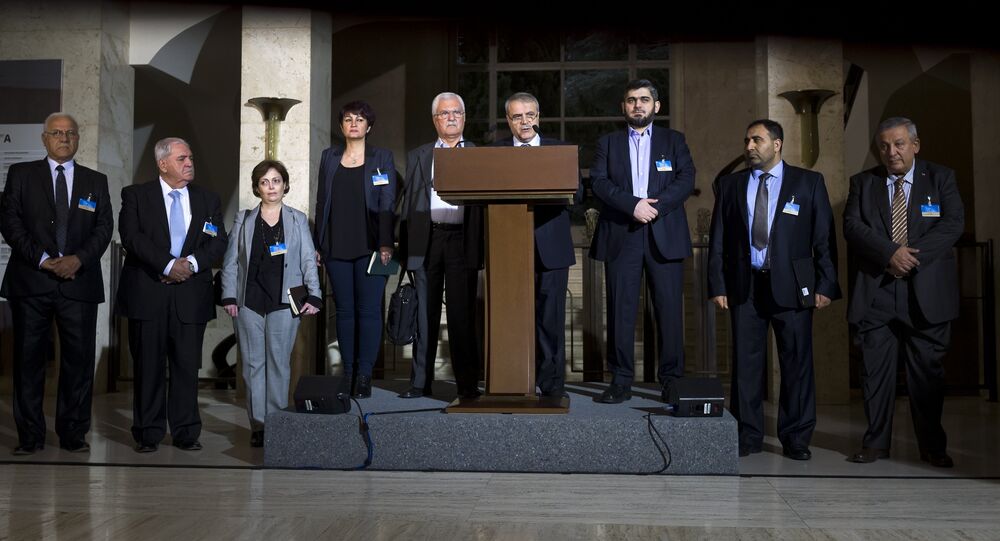 The Syrian opposition Cairo platform has received invitation from the Riyadh-backed High Negotiations Committee to organize a meeting of delegations of Syrian opposition groups, however, the Cairo platform would prefer to hold such a meeting not in Riyadh, but in Geneva under the UN aegis, Firas Khalidi, the platforms delegation head, told Sputnik.

© REUTERS / Salvatore Di Nolfi/Pool
Syrian Opposition's HNC Welcomes De-Escalation Zone, Hopes for Extension
MOSCOW (Sputnik) – The HNC has previously proposed to hold a forum in Riyadh with the participation of Cairo and Moscow platforms of the Syrian opposition in order to prepare for the next round of intra-Syrian talks in Geneva.

"Indeed, we have received an invitation to the meeting of opposition delegations in Riyadh in mid-August, but the problem is not the place, the problem is the agenda and the issue of a formal request from the three platforms to UN Special Envoy for Syria Staffan de Mistura for holding a technical round under his control," Khalidi said.

Khalidi added that his platform was guided by national interests and advocated that the United Nations oversaw the negotiations on the political settlement in Syria in all the aspects.

The three participating groups of the Syrian opposition agreed on 12 basic principles for a future Syrian Constitution, proposed by UN mediator de Mistura, and reached general understanding among each other at the political level during the seventh round of intra-Syrian talks in Geneva that took place on July 10-14.

The next round of the Geneva talks is expected to take place in September, following a new high-level meeting on Syria in Astana during the last week of August. It may become the first-ever round of direct talks between the Syrian sides, given the opposition platforms’ determination to unite.

HNC Praises Syrian Truce Brokered by Russia, US at G20