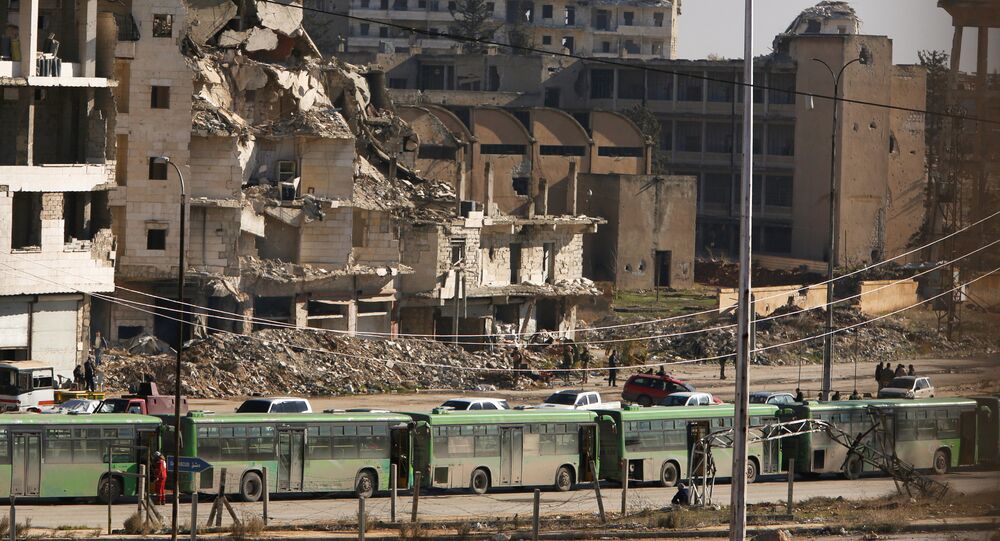 US Strikes Against Civilians in Syria: 'Genocide' Which 'Strengthens Terrorism'

The chairman of the Supreme Security Council of Iran, Ali Shamkhani, said that the airstrikes of the US-led coalition in Syrian Raqqa reduce security in the region and strengthen terrorism.

© REUTERS / Omar Sanadiki
Iran, Russia, Turkey Making Every Effort in Astana for Syria Settlement - Tehran
On Saturday, the Syrian news agency SANA reported with reference to the deputy head of the local Red Crescent branch that an international coalition led by the United States carried out an airstrike using phosphorous bombs on a hospital in Raqqa.

At a meeting with Syrian Prime Minister Imad Khamis in Tehran, Shamkhani accused Washington of violating human rights and stressed that the coalition operates in the country without the consent of the Syrian government or the UN mandate.

“Referring to a high civilian death toll in Raqqah, Shamkhani said the US air raids amounted to genocide as American warplanes used banned weapons and ammunition in their attacks,” Press TV reported.

He said the US aerial assaults were also a blatant example of human rights violation, proving Washington’s lack of commitment to principles of human rights.

Shamkhani further stressed that Iran will continue to stand by Syria and keep supporting it until the crisis is over in the Middle Eastern state.

“Instead of fighting terrorist elements, Western countries and the US take suspicious measures in line with strengthening terrorism and worsening insecurity in the region,” Shamkhani said, warning that the harmful effects of such moves “will lead to the spread of terrorism in the world,” Press TV reported.

Last week, Damascus wrote to the United Nations, calling for the dissolution of a US-led coalition, which has been carrying out airstrikes in Syria for years.

© REUTERS / Omar Sanadiki
How US Aims to Snatch 'Safe Zones in Syria From Under Damascus’s Control'
In two letters addressed to UN Secretary General Antonio Guterres and the world body’s Security Council, the Syrian Ministry of Foreign Affairs and Expatriates complained that the coalition “continues to commit massacres against Syrian innocent civilians through conducting systematic airstrikes.”

Russian Senator Alexei Pushkov in a Twitter message said that the US’s use of banned phosphorous ammunition in Syria has been proved and while the United States groundlessly accuses Damascus of using chemical weapons, it is the US that actually uses them.

On his Twitter page, Pushkov wrote, “Baselessly accusing Damascus of using chemical weapons, the US themselves use phosphorus ammunition prohibited by international conventions. And this is proved.”

​The SANA agency reported that the US-led coalition dropped phosphorous bombs during airstrikes on Raqqa on June 9. According to the agency, at least 17 people were killed.

© REUTERS / Rodi Said
Coalition's Use of Phosphorus Bombs, Strikes on Residential Areas 'Blatant Violation of Int'l Law' - Damascus
On April 4, the National Coalition for Syrian Revolutionary and Opposition Forces backed by the United States blamed the Syrian Arab Army (SAA) for the supposed chemical attack in Khan Shaykhun in Syria's Idlib province, which claimed the lives of 80 people and injured 200 more.

Damascus refuted the claim and called attention to the fact that the nation's entire chemical arsenal had been destroyed under the supervision of the Organization for the Prohibition of Chemical Weapons (OPCW) a few years before.

However, before any investigation into the issue was carried out, the US launched 59 Tomahawk cruise missiles at the Syrian Arab Army's Shayrat airfield on April 7 as "retaliation" for the alleged use of chemical weapons.

To complicate matters further, Pulitzer Prize-winning journalist Seymour Hersh published a chat protocol of a security advisor and an active US soldier on duty at a key base in the Middle East, which indicated that the US military on the ground "knew" that no chemical attack had taken place in Khan Shaykhun back on April 4.

'Aggressive Policy': Why US Sets Up a Network of Military Bases in Syria

Russia Hopes for Continuation of Contacts With US Over Syrian Settlement