MOSCOW (Sputnik) — The fake website was designed to look as part of Al Jazeera, with the reports stating that Qatari Ambassador to Russia Fahad Mohammed Attiyah accused reporters of RT, RIA Novosti and TASS of receiving bribes from the Ambassador of Saudi Arabia amounting to 600 million rubles ($9.98 million) for not publishing negative reports about the country. 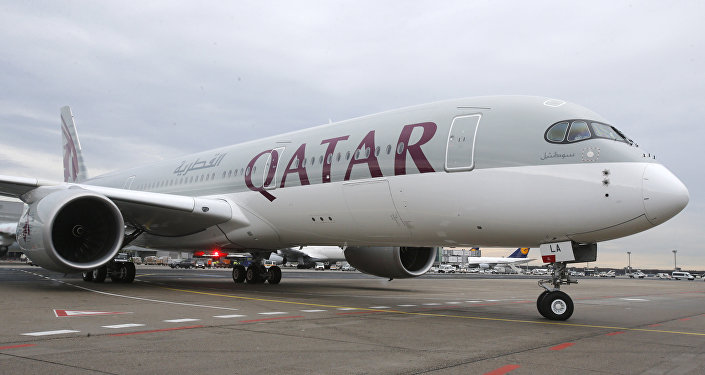 © AP Photo / Michael Probst
Doha Denies Reports on Arab Countries Opening Airspace to Qatari Flights
"This is not the first time when interviews, articles, photographs or videos are forged to look like produced by Al Jazeera. But this time the fake webpage with the report looks so convincing that fools everyone, and you need to look at it really closely to understand that the website is fake," Abuhilala told Sputnik.

Abuhilala explained that the article was published on the website, the web address of which had a dot under the letter Z which does not show up on the real website. But when the users clicked on the channel logo, they got transferred to the real website of the broadcaster.

"This is a very convincing fake, the purpose of which is to incite a conflict between Al-Jazeera and the Russian media, as well as between the Russian media and Qatar in the light of the crisis in the Persian Gulf, which the Russian media is covering professionally and objectively," Abuhilala said.

© Sputnik / Vitaliy Belousov
Qatar Calls Isolation by Arab States 'Obvious and Gross' Violation of Int'l Law
"I, as an observer, will describe the Russian political position as balanced; it helped Qatar to achieve a share of justice in the light of the blockade. I think that the parties behind the hack use it as an instrument of foreign policy, these parties are known. One should not forget that the UAE hacked the Qatari news agency (QNA), they started a crisis in the Gulf," the managing director said.

The crisis around Qatar, which manifested itself in the severance of the diplomatic relations between the Arab countries and Doha, arose because of the reports on the hacked QNA which caused a sharply negative reaction from neighboring countries, primarily Saudi Arabia.

Abuhilala also said that "hackers do not stop attempts trying to hack Al-Jazeera's accounts, but they have not succeeded yet." He suggested that representatives of the UAE were behind these attempts, but did not provide evidence to back the claim.

"Such attempts reflect the influence of the channel, its reputation. That is why they use the name of the channel to spread lies and defamation," Abuhilala added.

Abdullah Khalifa al-Miftah, Director of the Public Relation Department at the Qatari Ministry of Interior, said at a press conference in Doha that a group of experts had been gathering information for several weeks about a hacking attack on QNA and its profiles in social media. According to the head of the investigation team Ali Mohamed al-Mohannadi, the IP addressed linked to the attack belonged to the United Arab Emirates.

Lavrov: Russia Ready to Act as Mediator in Qatar Row