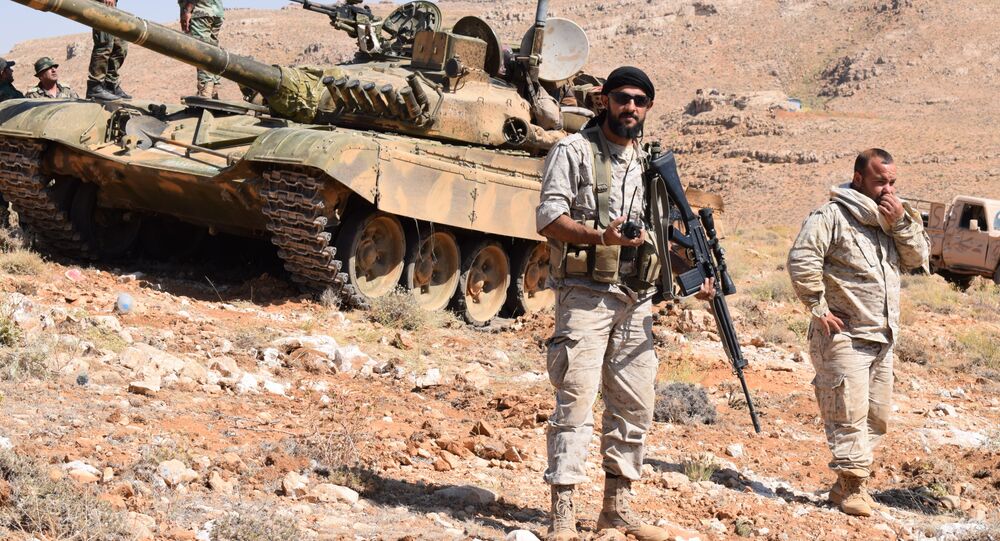 A Sputnik correspondent visited the mountain region of Aarsal, on the Lebanese-Syrian border, which has recently been liberated from Daesh and al-Nusra terrorists after fierce fighting.

© AP Photo
Small Nation’s Big Victory: al-Nusra Militants Driven Out of Lebanon
Hezbollah fighters have finally driven Islamist terrorists from the mountain region of Aarsal in Lebanon, on the border with Syria. Al-Nusra militants began attacking the town of Aarsal and surrounding areas when the Syrian war began six years ago and have committed dozens of terrorist attacks.

Lebanese security forces were targeted by Islamists from al-Nusra and Daesh in August 2014, when the terrorists attacked checkpoints after security forces arrested an al-Nusra commander. The militants killed over a dozen soldiers and policemen in the ensuing fighting.

Since then, Lebanese security forces have been aided by the Shiite militia group Hezbollah, best known for its ongoing conflict with neighboring Israel, in the fight to rid the region of terrorists. In late July, they reported that 90 percent of the Aarsal region has been cleared of terrorists.

Lebanese security forces and Hezbollah fighters have driven al-Nusra from the Al Wayne Valley and the rest of the Aarsal mountain region, as well as the Flita area in Syria. The remaining Islamist militants are hiding in refugee camps in the Wade Hamid area and El Mallari. It is believed that up to 200 militants led by Abu Malek al-Tally could be hiding in this region.

Fighters from Hezbollah told a Sputnik Arabic correspondent that the battles against the terrorists were some of the fiercest the country has seen since the 2006 Lebanon war. The militia invited Sputnik on a visit to the liberated area for the press, which began in the village of Unin in the Bekaa valley, before leaving for the recently recaptured area of Kariya, an important strategic position atop a hill.

© Sputnik / Zahraa ElAmir
View of Jaroud Aarsal
"The mount of Karja is of great strategic importance, because it is located opposite the Lebanese army position in Raas al Saraj. By taking Karja, we provided cover for the army's rear against Daesh terrorists, who are still occupying the nearby hills," a source in the Hezbollah security service told Sputnik.

"Karja is the latest place we have taken control of. It opens the way to the regions of Wadi Hamiid and Al Malahi, which are still occupied by Jabhat al-Nusra terrorists."

© Sputnik / Zahraa El-Amir
Hezbollah in Jaroud Aarsal
The tough terrain of these mountain regions makes it exceptionally difficult to destroy the terrorists. The contours of the landscape repeat themselves and several kilometers of mountains can all look the same to somebody who is not from this region. Only locals, or those who have spent a lot of time here, know the ins and outs of the narrow paths and passages of the area. The Hezbollah spokesman said that the fighters were able to beat out the terrorists thanks to their thorough examination of the terrain and great experience fighting in such conditions.
© Sputnik / Zahraa El-Amir
A destroyed vehicle in Aarsal
He added that divisions between Islamists, mainly between fighters from al-Nusra and Daesh also contributed to their defeat.

"There were constant conflicts between Daesh and Jabhat al-Nusra. They especially intensified whey Daesh demanded an oath of allegiance from the emir of al-Nusra, Abu Malik al-Tali, who refused."

© Sputnik / Zahraa El-Amir
Photos of martyrs of the Lebanese army in Jaroud Aarsal
Hezbollah fighters also had their own, personal, reasons for wanting to defeat the Islamists in Aarsal: revenge for the deaths of Lebanese soldiers who'd been killed by the terrorists. Portraits of the fallen hang in liberated cities in a sign of remembrance for their sacrifice.

Fighting continues in some mountain regions, as the terrorists carry out guerilla attacks on the Lebanese army and Hezbollah. Now and then, shots ring out, particularly in the areas of Wadi Khamiyid and Al-Malakhi. On their way back from the tour of Kariya, the journalists saw a column of armored vehicles carrying Hezbollah fighters into the mountains.

© AP Photo / IRIB News Agency, Morteza Fakhrinejad
Israel Watches Anxiously as Iran Expands Its Military Influence in Syria, Lebanon
On Friday, the Hezbollah leader Hassan Nasrallah announced the beginning of a new military operation against terrorists from Jabhat al-Nusra at Aarsal. The two-pronged operation attacked the militants from Flita in Syria as well as from Lebanese territory along the eastern mountain range.

The mountainous region of Aarsal is considered the most dangerous area on the Lebanese-Syrian border. The terrorists take advantage of the tricky terrain to smuggle in contraband weapons and send new recruits over to the border to fight in Syria. A refugee center in Aarsal is used by terrorists masquerading as refugees to hide from Lebanese army and they also try to smuggle cars laden with explosives across the border to use in terrorist attacks.