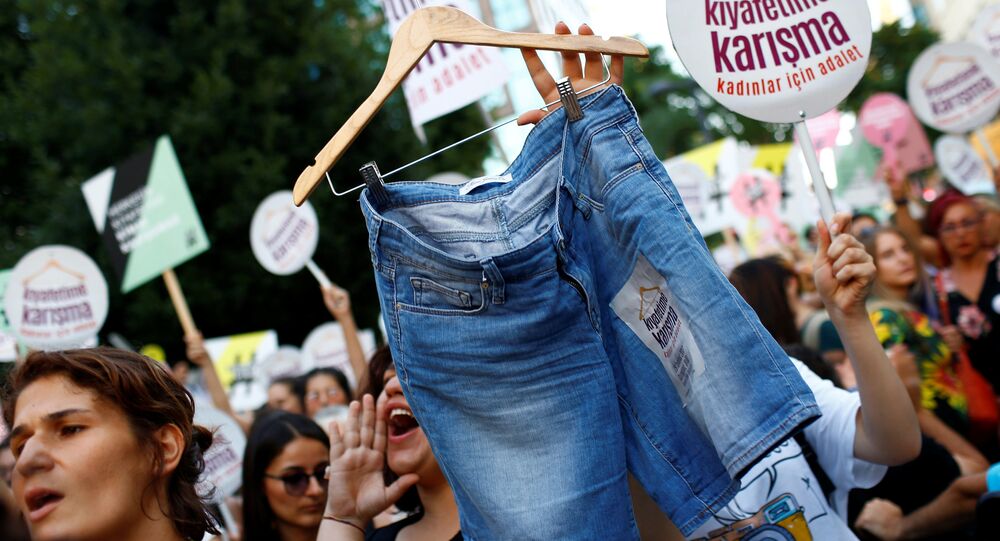 'Hands Off My Outfit': Women in Istanbul March for Right to Wear Shorts (VIDEO)

Hundreds of women protested in Istanbul on Saturday at demands that they dress more conservatively.

Hundreds of women took to the streets of Istanbul on Saturday in a demonstration against violence and demands that they adhere to a conservative dress code, Sputnik Turkiye reported.

The women gathered for the start of the march in the Kadikoy district on the Asian side of Istanbul. They chanted slogans and carried props such as denim shorts in order to make their point.

​'We are going to gather again today,' the organizers wrote on Twitter.

​"We will not obey, be silenced, be afraid. We will win through resistance," the demonstrators chanted.

After being harassed for wearing shorts women are fed up. They're out marching to say mind your own business not my dress#KıyafetimeKarışma pic.twitter.com/lM1s2GtSrx

​The march, dubbed "Don't meddle with my clothes," was organized by women's rights activists after reports of women being attacked or harassed for their clothing.

In one incident last month, a young woman named Asena Melisa Saglam was attacked by a man on a bus in Istanbul because she was wearing shorts during the Muslim holy month of Ramadan.

© REUTERS / Murad Sezer
Women rights activists shout slogans during a protest against what they say are violence and animosity they face from men demanding they dress more conservatively, in Istanbul, Turkey, July 29, 2017
In another incident on Saturday evening, a young woman was forced to leave a park in Istanbul because security staff objected to her clothing.

Members of the LGBT community, whose planned gay pride parade in Istanbul was canceled in June, also joined the protest and flew rainbow flags.

© AP Photo / Lefteris Pitarakis
Goodbye Past, Hello Future: Turkey 'Drifting' From NATO to Eurasia
Some women on the march were also protesting in favor of the right to wear headscarves, Reuters news agency reported.

Since Turkish President Recep Tayyip Erdogan's Justice and Development Party came to power 15 years ago, the government has relaxed restrictions on the wearing of women's headscarves, which were imposed by more secular governments.