A ballistic missile was shot down near the holy Muslim city of Mecca, a Saudi state news agency said citing a statement from the Arab coalition. The blame was put on Houthi rebels in Yemen; however, political analyst Karine Gevorgyan doubts that Houthis carried out the attack.

© Sputnik / Mikhail Voskresenskiy
Yemeni Rebels’ Missile Downed Near Saudi Arabia’s Mecca – Arab Coalition
The missile was intercepted 43 miles away from the Saudi city. Its fall did not cause any harm. The alliance command claimed that missiles were being smuggled into the war-torn country through the western Al Hudaydah port and under the guise of relief aid.

"The air defense forces of the Alliance in Support of Legitimacy in Yemen were able … to intercept a ballistic missile launched by the Houthi militias towards Makkah [Mecca]," the statement carried by the Saudi Press Agency (SPA) read.

This is not the first attempt to hit the territory of Saudi Arabia. In May, the air defense shot down a missile launched by the Houthis several hundred kilometers from Riyadh.

Such attacks could be in connection to the operation that Saudi Arabia has been involved in over the past two years.

The Saudi Air Force has been involved with its Gulf Cooperation Council allies in airstrikes against Houthis in Yemen. The campaign has inflicted an estimated 10,000 civilian deaths, according to UN humanitarian officials.

Political analyst Karine Gevorgyan in an interview with Radio Sputnik said that this attack might not have been carried out by Houthis because it was meaningless for them to do so.

“This is a rather strange act. Maybe it was from despair or aimed at disrupting the hajj? But what is the point for the Houthis to set Muslims from all over the world against themselves?” the analyst said. 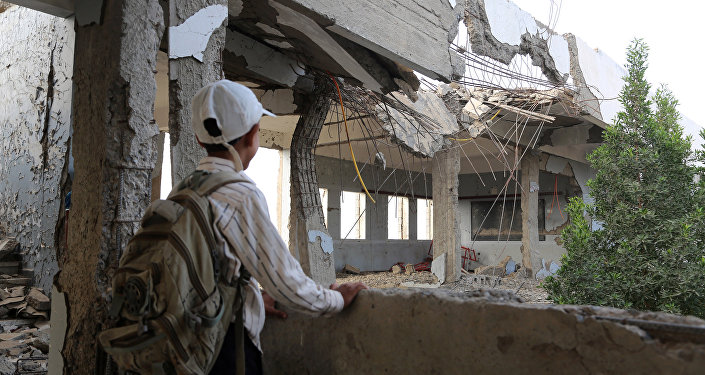 © AFP 2019 / STRINGER
Attack on Yemen’s Houthi-Held Port City May Displace 400,000 People, IOM Says
She further said that instead of blaming Yemeni rebels, Saudi Arabia should consider that it is possible that some oil rich regions of the country, where Shiites reside could want to take Mecca. So it could be an internal affair.

She further spoke about why it is doubtful that the alleged attack was carried out by the Houthis.

“There is a certain specificity of the situation: Houthis are fighting in small groups and there are certain agreements between them. However it is difficult to act as a unified army on a foreign territory, plus they do not have an incentive for that,” Gevorgyan said.

The analyst also said that it is possible that the information about the interception of the missile could be used by Saudi Arabia to “tickle the nerves of Iran.”

“Let's see what will be the activity of Saudi Arabia next. Most likely, all this is connected with an attempt to indirectly clash with Iran, as it supports the Houthis,” Gevorgyan said.

She further said that the US recently shot in the direction of an Iranian vessel in the Persian Gulf and that shows that there is some kind of attempt to provoke Iran, so that the nerves of the Iranian authorities are shaken.

Houthis Ready for New Talks With Yemeni Gov't, but No Longer Trust UN