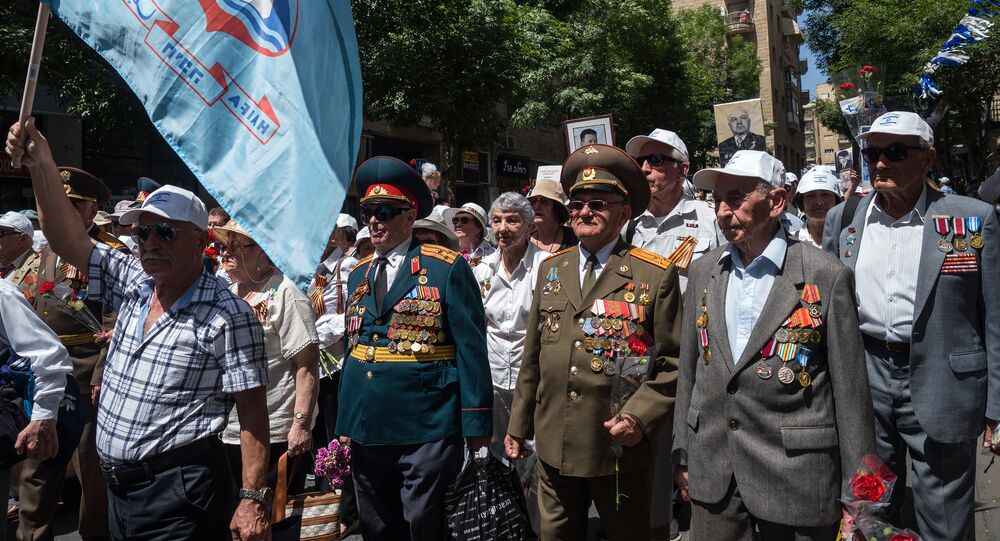 'Soviet Officers Saved Us From Nazis': Israel Rises Up Against Rewriting History

The Israeli Parliament has passed a bill to celebrate Victory Day on May 9 as the allied victory over Nazi Germany in 1945. In an interview with Radio Sputnik, Israeli political analyst Simon Tsipis said that Jews would never accept some countries’ attempts to rewrite history.

© Sputnik / Vladimir Presnya
Israel Marks Victory Day by 'Immortal Regiment', Veterans Marches in Jerusalem
With the draft now enacted, the Jewish State will now celebrate the defeat of Nazi Germany on the same date as Russia, which is a day after most of Europe marks the event.

"People in Israel remember the Red Army officers who smashed the locks on the gates of the concentration camps. It is a very sensitive matter because for us Victory also means freedom for the Jews who languished in Nazi death camps. God only knows how many more Jews would have been exterminated had it not been for the Victory gained thanks to the Red Army, the Soviet Union,” said Simon Tsipis, who is a foreign policy expert at Tel Aviv University.

“There are more than a million Russian-speaking immigrants from the Soviet Union now living in Israel. Right now we have several hundreds of thousands of WWII veterans who celebrate Victory Day on May 9,” he added.

“Our people lost more than 6 million of their own during the war, and here we are one with Russia. We seriously criticize the attempts to rewrite the past now being made in the Baltic countries and in Ukraine. In his address to the Ukrainian Parliament, our president said loud and clear that hundreds of thousands of Jews were killed in Babiy Yar and that Ukrainian nationalists were working hand in hand with the German Nazis guarding the concentration camps and killing their Jewish inmates,” Tsipis emphasized.

These words ring particularly true  now that anti-Soviet, neo-Nazi ideology is rearing its ugly head in Ukraine with the growth of extreme right-wing parties such as the Right Sector and Svoboda, which associate themselves with Stepan Bandera and other nationalist leaders who collaborated with Nazi Germany during WWII and were responsible for numerous atrocities against Soviet soldiers and local civilians.

And in the former Soviet Baltic republics, Waffen SS veterans who fought on the side of German Nazis during the war feel free to hold their marches totally unhindered thus casting doubt on their countries status as a part of civilized Europe.

The basic provisions of the bill include the allocation of time in the schedules of schools and army units for studying the history of the Allied Victory of Nazism, and financing the local authorities’ work to perpetuate the memory of WWII.

The document stipulates that on May 9 the Knesset hold a memorial session and there be a public procession in Jerusalem.

Russia and many other former Soviet republics traditionally celebrate Victory Day on May 9 with large-scale military parades, concerts and other public events. Most Western countries celebrate the victory over Nazi Germany on May 8.