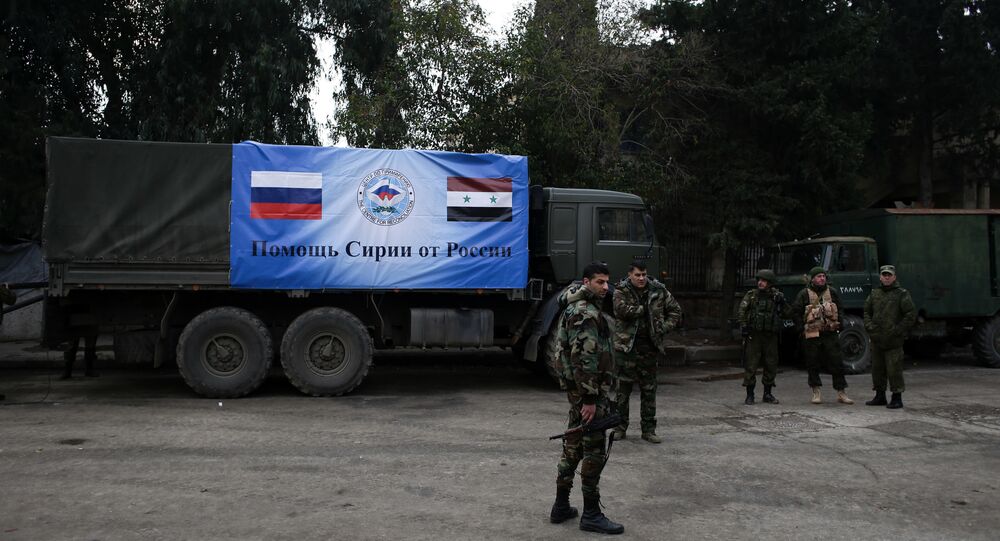 The first humanitarian aid convoy from Russia delivered to the Eastern Ghouta neighborhood in Damascus suburbs, according to the Russian center for Syrian reconciliation.

The center also organized the evacuation of the wounded and sick residents from the areas controlled by the armed Syrian opposition.

"The delivery of humanitarian aid was made possible by the deployment of checkpoints manned by the Russian military police, which stabilized the situation in the deescalation zones, and allowed for opening the humanitarian corridors" the center said in a statement.

On Saturday, the Russian Defense Ministry said agreements on the operation of the Eastern Ghouta de-escalation zone had been signed following Egypt-mediated talks in Cairo between representatives of the ministry and the Syrian opposition. Syrian armed opposition group Jaysh al-Islam has confirmed the agreement, which envisages a full ceasefire in the region. The Eastern Ghouta safe zone deal came into force on Monday.

Syria’s Ambassador to China and former Ambassador to the United States Imad Moustapha, noted the role of the Eastern Ghouta deescalation zone in stabilization of the situation in the region.

"Naturally, the deescalation zone will help lower-down the intensity of the conflict and bring some necessary relief to the civilians held as hostages by the various armed groups," Moustapha told Sputnik.

© Sputnik / Mikhail Voskresenskiy
Russian, Syrian Military Go on Patrol at Joint Checkpoint in Eastern Ghouta
In a comment to Sputnik the ambassador added that "some of the most ferocious fighting and killing" that occurred in Ghouta in the last two months was between the groups supported by Qatar and Saudi Arabia, rather than the Syrian government forces and armed groups.