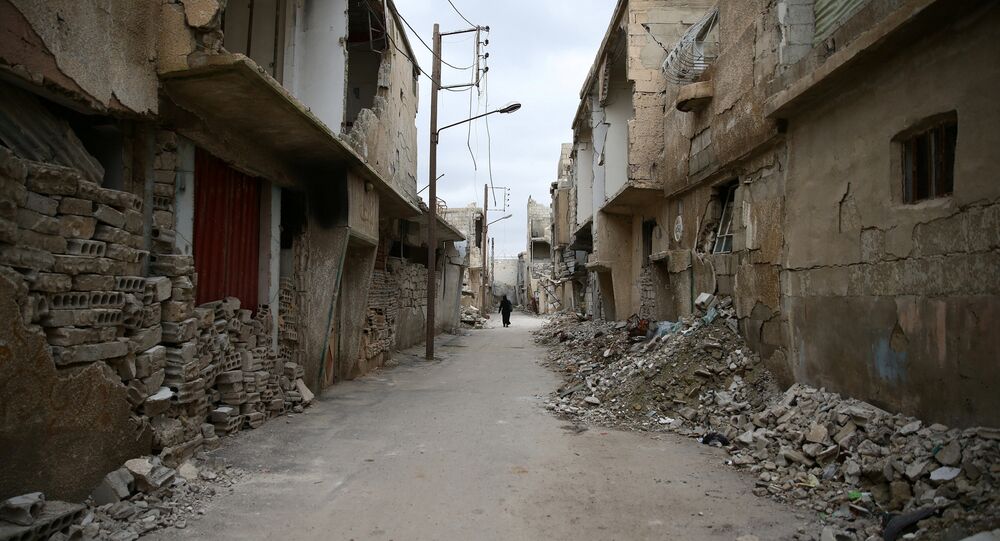 The Russian reconciliation center in Syria denied Tuesday the reports of an airstrike on July 24 in the de-escalation zone in eastern Ghouta.

DAMASCUS (Sputnik) – The agreement on operation of a de-escalation zone, envisaging full ceasefire, came into force in eastern Ghouta on Monday. Earlier Tuesday, media reports emerged claiming that an airstrike killed at least eight people in an attack on the town of Arbin the previous evening.

"Western media reports citing the UK-financed White Helmets and the London-based Syrian Observatory for Human Rights on an alleged airstrike on evening of July 24 in the eastern Ghouta deescalation zone are a complete lie aimed at discrediting the peace process," a spokesperson of the center said.

© Sputnik / Mikhail Voskresenskiy
Russian, Syrian Military Go on Patrol at Joint Checkpoint in Eastern Ghouta
According to the spokesperson, local opposition groups "confirmed there were no airstrikes or combat in this de-escalation zone."

On Saturday, Russian Defense Ministry announced the signing of an agreement on the order Eastern Ghouta de-escalation in Syria following the results of the talks held in Cairo with Syrian opposition, mediated by the Egyptian side. The agreements define the borders of the deescalation zone, the deployment sites and powers of the deescalation control forces, as well as the routes for delivering humanitarian aid and clear passage to the population. On Monday, the General Staff of the Russian Armed Forces reported that Russia has set up two checkpoints and four observation posts in the zone.