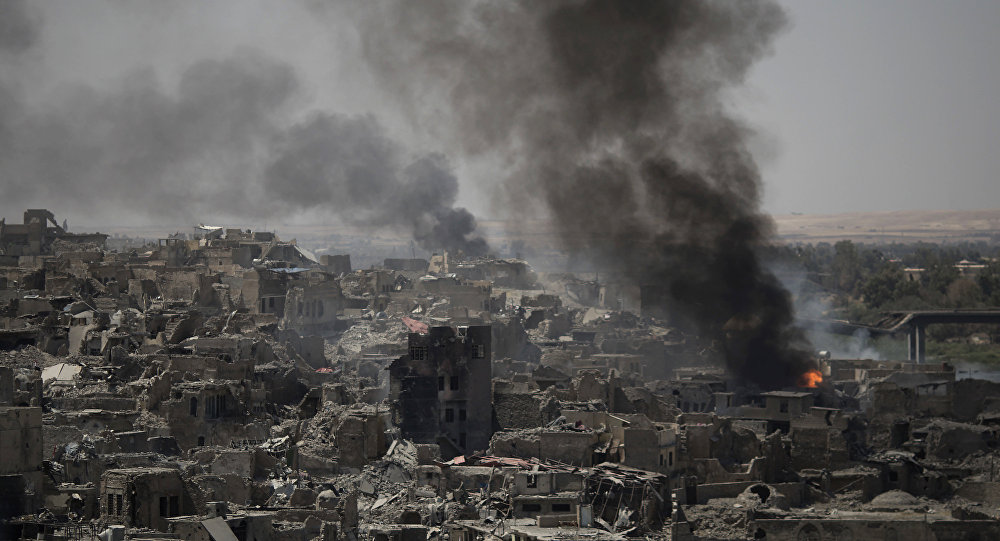 A video showing a Sputnik correspondent of the Arab news desk Sara Nureddin coming under fire on Sunday in Iraqi Mosul was released on the Sputnik website.

© AFP 2019 / AHMAD AL-RUBAYE
Sputnik Correspondent Sarah Nureddin Comes Under Fire in Iraq's Mosul
MOSCOW, (Sputnik) — The incident occurred earlier in the day, when the correspondent was filming the process of mine clearing in the residential district of al-Maydan close to main mosque al-Nuri. As a result of the attack, the serviceman escorting the correspondent received injuries, while the reporter herself suffered bruises.

"The soldier received five injuries in the leg, back and lost a finger. I suffered bruises, while running to a safe place in the basement of the school," Nureddin explained.

Nureddin told later that the danger has become clear already on the way to al-Maydan district.

"When we were approaching by car to this district, I saw the dead bodies of two Iraqi servicemen, who had been carrying out mine clearance there, being taking away," Nureddin said.

The corresponded said that she asked to allow filming the operation from another site, and the servicemen admitted her to film from the roof of a nearby school.

"We climbed there. There was some room near the roof, with a hole in the roof. When I approached, I saw a man in civilian clothes. He held an M16 rifle," Nureddin specified.

The reporter said that she gave signs to the accompanied her soldier that there was a man in that room, he started to approach, while the correspondent ran to another building to hide.

"I turned around and saw the soldier lying on the floor and already without a weapon. His arm and leg were bleeding. He shouted to me 'I am injured, run!' But I dragged him, we hid from the militant in some room. The soldier thought he was dying and started to ask God for forgiveness," the corresponded added.

Nureddin and the soldier managed to go downstairs to the school yard and hide behind one of the burnt cars. The reporter started to call the soldiers's commanders, when shots were fired again.

"We were expecting with fear to see the militant. We have hidden near the cars, than we got inside them in hope that he would not find us. After that the shots ended, the anti-terror unit soldiers arrived in an armored Hummer and took us," Nureddin recalled.

The video issued by Sputnik show the way Nureddin and the accompanied her soldier were trying to hide from the attacker behind a burnt vehicle.

The footage contains a moment in which the Sputnik corresponded called to the soldier's commanders and asked for help. It could be seen how she was frightened, how her breathing seized up following the escape from the militant with the injured soldier.

The video footage also displayed the injured Iraqi soldier lying on the floor and Nureddin holding him. It continued showing the arrived servicemen, and both the correspondent and the soldier being taken to a safe place, while the soldiers who came to rescue them were delivering a message by radio about the militant settled on the school's roof and asking for reinforcement.