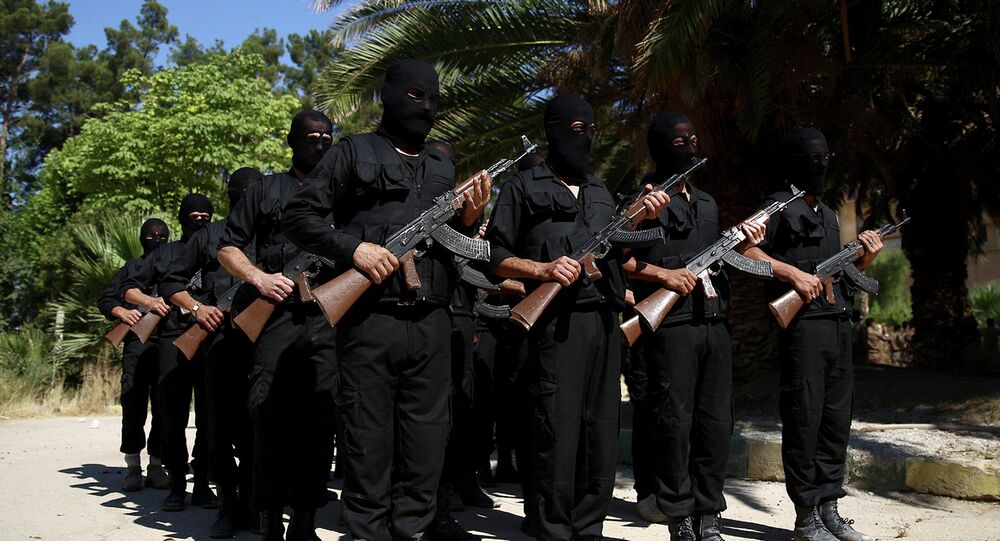 © AP Photo / Muhammed Muheisen
End of CIA Training Program Removes Roadblock to Real Peace in Syria
WASHINGTON (Sputnik) — US President Donald Trump reportedly decided to halt the training of Syrian rebels about a month ago after a meeting with CIA Director Mike Pompeo and national security adviser H.R. McMaster. The program originally ramped up in 2015 and was designed to produce a force of more than 5,000 troops to fight the Syrian government.

"This program increased the level of operational uncertainty beyond which Mr. Trump, McMaster and even CIA Director Pompeo were comfortable," Kwiatkowski said on Thursday.

Trump, McMaster and Pompeo appear to have taken decided to shut down the CIA training program well before the US president met Russian President Vladimir Putin on the sidelines of the G20 summit in Hamburg earlier this month, Kwiatkowski recalled.

Contrary to neoconservative analysts who claim Putin during their talks at the G20 persuaded Trump to drop the Syria program, Trump had been prepared to scrap the CIA training program before he was elected president, Kwiatkowski pointed out.

Trump’s decision to end the CIA training program in Syria was likely to be welcomed by many US citizens, Kwiatkowski predicted.

"The CIA aid program initiated under Obama in 2013 had been embarrassing, counterproductive and confusing to many Americans," she remarked. "It was ineffectual, and typical of most CIA field operations, operationally implemented without thorough coordination with either State [Department], the Department of Defense or local allies," she said.

The program had aroused increasing concern among US intelligence veterans, Kwiatkowski added, noting that in the past 18 months even CIA officials had expressed concern about the ineffectiveness of the initiative.

"Four years of [Daesh], (banned in Russia) and extremist rebel defections from the US program in Syria, taking with them US weapons, training and intelligence, increases the risk factor of violating the great power goals in Syria," she said.

The CIA program had also repeated disastrous failed US secret policies in many other conflicts around the world since World War II, Kwiatkowski added.

"The concept of aiding selected rebel groups in a civil war in order to emplace a friendly dictatorship or satrap is certainly a tried and failed US approach around the world for the past 70 years. It’s not particularly imaginative," she said.

However, the discontinuation of the CIA program, "as with the conclusion of all welfare programs," will be met with anger, recrimination, and simmering resentment by those who were formerly in receipt of the aid, Kwiatkowski predicted.

McConnell, the Republican Majority Leader in the Senate and McCain who chairs the Senate Armed Services Committee strongly supported the CIA secret training program for rebels seeking to topple Syrian President Bashar Assad over the past five years, Kwiatkowski recalled.