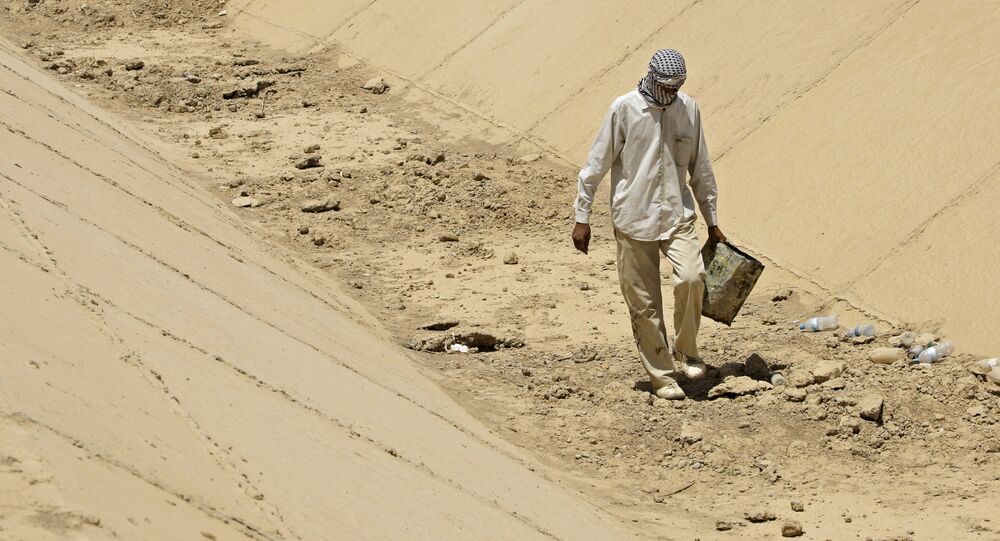 Tensions are rising in bilateral relations between Turkey and Iran. The reason for this is water. Sputnik spoke to an expert in strategic studies of the Middle East about what is behind this new dilemma and whether it can be resolved peacefully.

© AP Photo / Hadi Mizban
Why Turkish Dams Could Push the Region Toward New Conflict
Turkey plans to construct 22 new dams in the South Anatolia region but such a decision has already sparked concern among Iranian authorities, as this construction will lead to the drying up of two major water sources for Iran. However the expert thinks that Turkey is being wrongfully blamed.

Expert with the Center for Strategic Studies of the Middle East (ORSAM) Seyfi Kılıç told Sputnik in an interview that the basis of this problem lies in history, when Saddam Hussein ordered to drain the swamps around Basra in order to destroy the Shiite habitat.

He further said that this decision by Hussein "provided support to the US occupation forces in the region after the end of the 1991 Gulf War.”

“The fact that the leadership of Tehran is repeating the words of Iraq and accusing Turkey does not help the cause,” the expert said.

In his understanding, the key to solving the problem lies not in igniting the conflict but in Tehran's changing its water policy.

“There is an impression that Iran somewhat shares the opinion of the central government of Iraq in this issue. Nevertheless, considering that after the end of the 1991 Gulf War, the Shiites in the region assisted the US occupation forces, Saddam Hussein ordered the laying of channels and draining swamps around Basra in order to destroy the area of its residence,” Kilic said.

He further said that due to such actions there was a desertification and the emergence of a large number of sandstorms in the region.

“In view of the fact that the desertification of these territories occurred during the period of the Iraqi government's rule there, it would be wrong to blame Iran and Turkey for this,” he said.

© REUTERS / Rodi Said
Ankara Denies Involvement in Turkish Media Release of 'Sensitive' Info on US Bases in Syria
The expert further said that the Tigris and Euphrates rivers have sufficient water potential and Syria and Iraq’s current demand of Turkey is "irrational".

“The water reserves of these two rivers are sufficient for Turkey, Iraq and Syria when it comes to reasonable consumption. However, these reserves are not able to satisfy the irrational demands of Syria and Iraq,” Kilic said.

He also said that the fact that the problem with water supply can bring the issue of war to the agenda is fundamentally wrong, but if there is a desire to kindle a war, any reason will seem sufficient.

“I do not think that the problem with fresh water can lead to a military conflict, because there are a lot of examples in the world of resolving a large number of issues with effective use of water resources at lower costs whereas, the war is very expensive,” Kilic said.

According to the expert it is possible to resolve this problem but blaming Turkey for this is an absolutely unjustified act because Turkey, according to the 1987 protocol, leaves much of the water from the Euphrates River to Syria and Iraq.

“If Turkey pursued the goal of stalling the issue of fresh water, it would not sign this protocol. Such criticism of Turkey cannot be taken seriously,” Kilic concluded.

Earlier Iran’s head of the Department of Environmental Protection, Masoumeh Ebtekar, called on the Iranian Foreign Ministry to help convince Turkey to abandon its plans of building dams.