Experts commented the next challenges that will face Iraqi authorities after recapture of Mosul from the Daesh terrorists.

MOSCOW (Sputnik) — The decisive defeat of the Daesh terrorist group in Iraq’s Mosul allows the country to take the next step toward restoration, but the government will have to handle religious and ethnic tensions as well as corruption on its way to recovery, experts told Sputnik.

On Monday, Iraqi Prime Minister Haider Abadi announced that the terrorist group was fully defeated in Mosul, which used to be the Daesh stronghold in the country, and added that Iraqis now had to come together to rebuild peaceful life just like they came together to fight terrorists.

According to the latest information from the Iraqi army, mine clearing of roads and buildings as well as fighting continue, with the western part of Mosul still closed for media.

© REUTERS / Alkis Konstantinidis/File photo
Clashes Between Iraq's Army, Daesh Militants Resume in West Mosul - Witnesses
Relieving the sectarian tensions, which have defined a number of problems the country has faced, especially in the last decade and a half, will be an important task, Professor Beverley Milton-Edwards with Queen’s University Belfast, a Visiting Fellow at Brookings Doha Center, told Sputnik.

"The task of moving Iraq beyond a sectarian narrative is monumental and will now take a generational shift," Milton-Edwards, whose research focuses on the contemporary Middle East, security and terrorism, said.

Shiite Muslims make up the majority of the Iraqi population, about 55-60 percent, while Sunni Muslims represent about 40 percent. The country is also home to a comparatively small number of Christians, Yazidis and a few other religious minorities.

According to Lorenzo Kamel, a senior research fellow at the Istituto Affari Internazionali (IAI) and a nonresident associate at Harvard University’s Center for Middle Eastern Studies (CMES), the growth of Iraq’s population, which remains among the highest in the world, means that a large percentage of those born after 2003 "know only the current Iraq and its cleavages." According to the expert, a little over a decade ago a large part of Baghdad's population was made up of the people born in Sunni-Shiite marriages.

"Baghdad's Iraqis called them ‘Sushis.’ It will take much time to return to this ‘Sushi mentality’ because, as noted by Athenian historian Thucydides over two millennia ago, people tend to ‘adapt their memories to suit their sufferings.’ In other words, the scars that each local actor suffered in recent years are and will continue to generate new and conflictual narratives. Yet, the future of Iraq passes through the deconstruction of the present and its conflictual narratives," Kamel told Sputnik.

According to the expert, instead of trying to discover a new identity, Iraqis should "struggle to get back into history, their history, rediscovering the permeability and the specificities that for millennia characterized the daily life on this land."

© REUTERS / Alkis Konstantinidis/File photo
Iraqi Military Closed Western Mosul for Media Over Security Concerns
While religious and ethnic differences have contributed to the unrest in the country, they are far from the only troubling factor.

"Political leaders have to demonstrate that power and its dividends in Iraq can be shared equitably and without the steer or influence of external actors. Political leaders also need to tackle the deeply corrosive effects of corruption and cronyism in the Iraqi state to move the country forward," Milton-Edwards said.

The last three years in Iraq saw a number of protests, with people demanding an end to corruption. The 2016 Corruption Perceptions Index prepared by Transparency International had Iraq at 166th place in its list of 176 countries, placing it among the most corrupt countries in the world.

The Iraqi government will also have to consider the Kurdistan region’s struggle for independence in its attempt to rebuild the country, according to Milton-Edwards.

"The Kurdish wish for autonomy will no doubt be maintained as the Iraqi state attempts to rebuild Post-Mosul. Their desire for independence will be tested in the forthcoming referendum on September 25," the expert said. 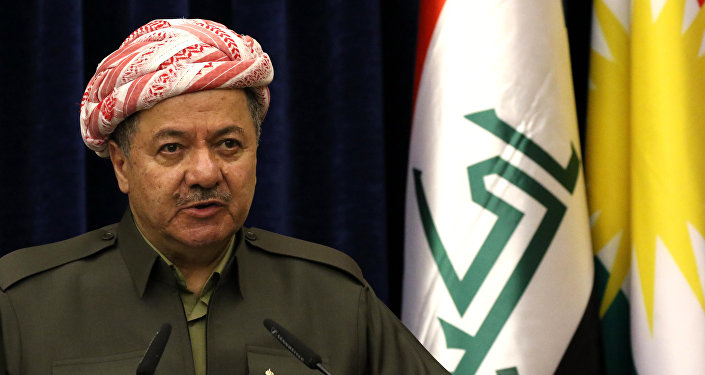 © AP Photo / SAFIN HAMED
US Ambassador Discusses Mosul, Independence Referendum With Kurdistan Head
According to her, the referendum underscores the Kurdistan Regional Government’s (KRG) wish for a future "without the rest of Iraq."

"This highlights an important tension between elites in the KRG and Baghdad about the way forward," Milton-Edwards said.

The Iraqi government did not welcome the announcement of the referendum made by Kurdistan authorities in early June. Government spokesman Saad Hadithi stressed that all Iraqis should have a say in deciding the future of their country.

The United States, a major participant of the international coalition fighting the Daesh in Iraq, has also been wary of the plan to hold a referendum. The State Department said in June it communicated to the KRG that the plebiscite could be a distraction from such urgent matters as the defeat of the Daesh. US Envoy to the anti-Daesh Global Coalition, Brett McGurk, said Thursday that September was too close a date for the referendum and the vote might have a destabilizing effect.

The referendum will be held throughout Iraqi Kurdistan, as well as territories of several disputed provinces claimed by both Iraqi Kurdistan and Iraq.

EXAMPLES FROM THE PAST

© AP Photo / Alice Martins
Kurdish Referendum to Impact Counter-Daesh Campaign in Iraq - Coalition
There may be some examples from the past that could guide the Iraqi government and international players in the region in their attempts to stabilize the country, experts told Sputnik.

"It is almost impossible to imagine the task ahead to rebuild Iraq without reference to the past and the challenges of Post-war reconstruction that faced, for example, European states after World War Two. Iraqi leaders have called for a 'Marshall Plan' for the country now that it has been liberated from the control of ISIS. In 1945 though Europe recovered from war only with the input of US support and cash for reconstruction. But under [US] President [Donald] Trump we see that the US is less inclined to play such a role on the global stage," Milton-Edwards said.

Kamel suggested that the diversity in Iraq's leadership that could be seen in the past could be the key to the country’s transformation.

"It is enough to mention that among the 23 prime ministers who held office in Iraq from 1921 to 1958, there were 12 Arab Sunnis, four Arab Shias, four Kurdish Sunnis, two Christians and one Turkman Sunni. True, the reality on the ground is today extremely different," Kamel said.

© AFP 2019 / AHMAD AL-RUBAYE
How Iraqi Kurdistan Independence Vote Will Affect Regional Players
The expert added that the Daesh, one of the biggest threats Iraq is facing at the moment, could be considered an ideology rather than an organization.

"And this ideology is largely the result of what the region is experiencing in recent years. There was no ISIS in Syria before 2011 as there was no al-Qaeda [terrorist organization, banned in Russia] in Iraq before 2003," Kamel said.

The expert added, citing US State Department data, that "incidents of terrorism" had greatly increased since the war on terror was announced in 2001 and "half of them have been registered in Afghanistan and Iraq, whose destabilization has had a sort of earthquake effect on all the region."

The continued support of regional and international actors, especially humanitarian agencies, will be vital for post-war Iraq, Milton-Edwards said.

"Regional and international support for the immediate post reconstruction and humanitarian phase is essential for Iraq and the benighted peoples of those zones formerly occupied by Daesh/ISIS [acronyms for Daesh]. This form of participation is highly desirable through humanitarian agencies such as the UN and other NGOs," the expert said.

She warned, however, that attempts to create influence zones in Iraq should be avoided.

"Where alarm bells will surely ring will be in external shaping or input in the security or political sphere. Some sort of 'carve-up' of Mosul and its surrounding districts into externally backed spheres of influence must be avoided," Milton-Edwards said.

© AFP 2019 / AHMAD AL-RUBAYE
This is the Next Target of Iraqi Forces After Mosul Liberation
The anti-Daesh coalition said its task in Iraq following the defeat of terrorists would be to train local security forces and ensure they were self-sustainable, with the coalition staying on for as long as was needed. A number of international humanitarian organizations, the International Committee of the Red Cross, Doctors Without Borders, various UN agencies and many others are firmly committed to continuing their work in the region.

A general election will be held in Iraq in 2018. In 2014, the State of Law Coalition, headed by former Prime Minister Nouri Maliki, won 92 of the 328 seats in the Council of Representatives. The results of the upcoming vote are hard to predict, but whoever wins will have to address numerous issues mentioned above.