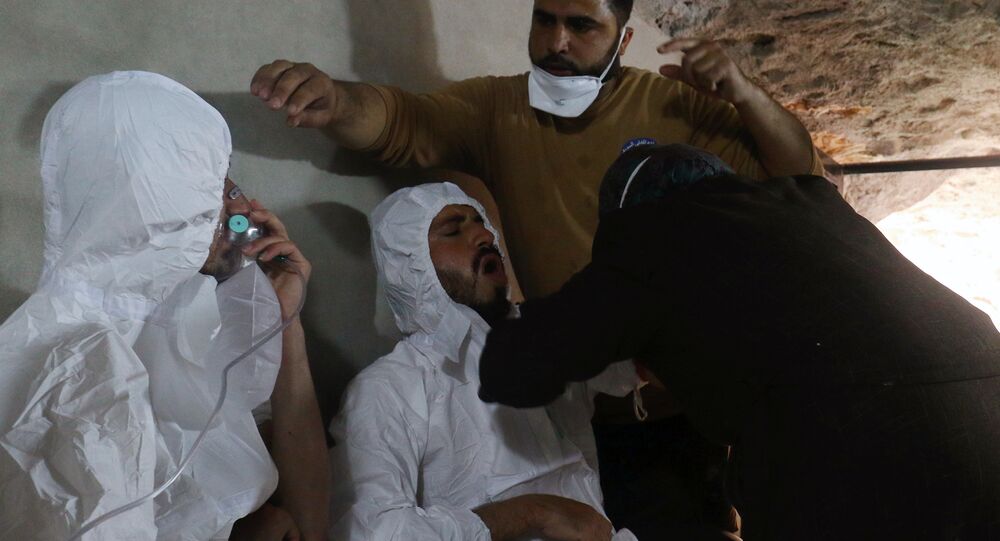 Commenting on a recent report by the Organization for the Prohibition of Chemical Weapons on April's chemical incident in the Syrian province of Idlib, Russian expert Igor Nikulin told Sputnik that the document contains allegations rather than facts.

© AFP 2021 / AMER ALMOHIBANY
Russia Envoy Points to Absence of 'White Helmets' Video in OPCW Report on Sarin
Earlier this month, the Organization for the Prohibition of Chemical Weapons (OPCW) Fact-Finding Mission (FFM) presented a report claiming the mission had established the use of sarin in a chemical incident in the Syrian province of Idlib in April, but did not determine who was responsible.

The Russian Foreign Ministry's nonproliferation department chief Mikhail Ulyanov told Sputnik on Thursday that the OPSW report was flawed and that a more serious probe into the April incident is needed.

"The OPCW FFM presented a not very high-quality report, on the results of almost three months of work, unequivocally confirming the use of sarin in Khan Sheikhoun," Ulyanov said.

He noted that a Syrian national investigation reached the same conclusion, and added that "the baton is now with the OPCW-UN Joint Investigative Mechanism (JIM), which has a mandate to identify perpetrators based on the results of its own research and the FFM report."

Ulyanov also said that "elementary logic suggests that Washington should have insisted on an urgent visit to Sha'irat by the UN and OPCW specialists in order to incriminate Damascus on an international level of violating the Convention on the Prohibition of Chemical Weapons".

"But no, the United States desperately prevents international personnel from visiting the air base despite the Syrian government's invitation and its willingness to guarantee the safety of the trip," he added.

The United States is desperately preventing international experts from visiting the Syrian airbase that it attacked with cruise missiles in April, according to him.

Speaking to Sputnik, Russian expert Igor Nikulin, for his part, slammed the OPCW's report as a document which he said is full of speculations, not facts.

"The OPCW openly fulfills a political order and such 'remote' investigations are clearly something new [when it comes to implementing a fact-finding mission]. No court would accept such data as evidence because their report only contains speculations rather than facts," Nikulin said.

He recalled that the task of inspectors is to establish facts on the spot, not to receive unreliable information as the authors of the report did.

"The government [of Syrian President Bashar Assad] has repeatedly invited OPCW inspectors to visit the Sha'irat airbase where an airplane allegedly took off with chemical weapons on board to launch a strike on militants. However, the inspectors refused to do so," Nikulin said, adding that "it would have been very easy to track sarin at the the Sha'irat airbase, something that would have been very difficult to hide."

Earlier this week, Russia's Permanent Representative to the OPCW Alexander Shulgin said that the fact that the OPCW Fact-Finding Mission did not include a "White Helmets" video into the report on April's chemical incident in Idlib suggests that the US decision to carry out a missile strike on a Syrian airbase was based on "insignificant information."

The video footage of the "White Helmets" group featured the bodies of children who allegedly fell victim to the sarin gas attack. The Russian envoy said that reportedly it was exactly this footage that made Trump take the decision to strike the Syrian Ash Sha'irat air base.

© REUTERS / Ammar Abdullah
A civil defence member breathes through an oxygen mask, after what rescue workers described as a suspected gas attack in the Syrian town of Khan Sheikhoun, April 4, 2017

On April 4, the National Coalition for Syrian Revolutionary and Opposition Forces, supported by the United States, blamed Damascus for the Khan Sheikhoun incident that left 80 people dead, including children, and injured 200 more.

© REUTERS / Ammar Abdullah
Absurdity or Provocation: What's Behind US Claims of Chemical Attack Preparation in Syria
The Syrian army strongly rejected the accusations and laid the blame on local militants. The Syrian authorities said that they had never used chemical weapons against civilians or terrorists, and that the nation's entire chemical arsenal had been destroyed under the control of the OPCW.

Reacting to the incident, Washington, which had not presented any proof of the use of chemical weapons by Damascus, launched 59 cruise missiles at the Syrian governmental military airfield in Ash Sha'irat on April 7.

On April 21, Syrian President Bashar Assad told Sputnik that there was no chemical weapon attack in Idlib, adding that the reports were a false flag and a fabrication which was supposed to justify a US missile strike on Syrian airbase.