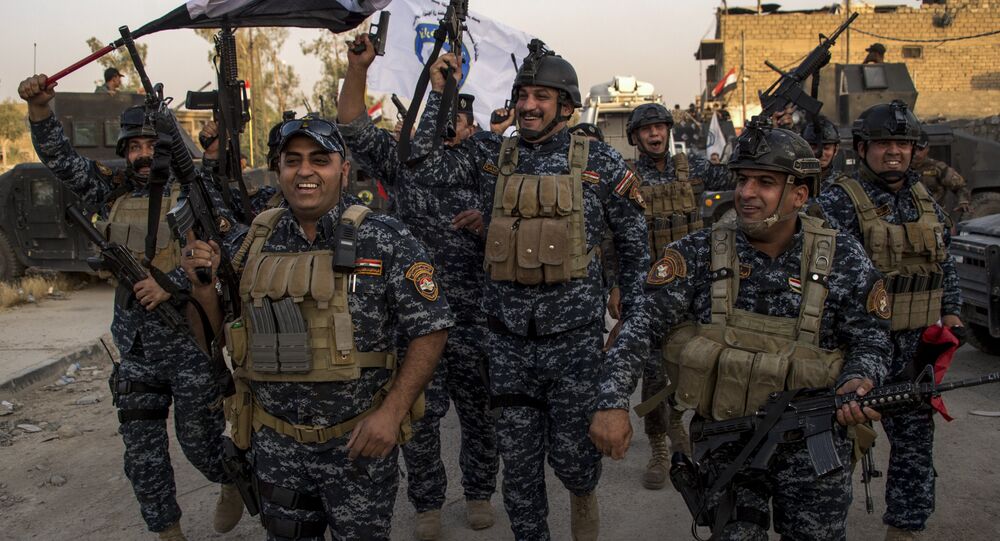 Road of Life, Smell of Death in Mosul

It is not easy to enter the second largest Iraqi city of Mosul after its liberation from Daesh, a phenomenon that was witnessed by a Sputnik correspondent, who had to undergo a number of security checks and endless checkpoints at the road as well.

© REUTERS / Stringer
Aid Agencies Stress Mosul Civilians Need Help Even as Battle for City Concludes
MOSUL (Sputnik) – The war-ravaged and smoldering Mosul is located just 85 kilometers (52.8 miles) from the peaceful and flourishing city of Erbil in Iraqi Kurdistan, which is where the foreign journalists usually arrive. However, for local residents who had fled the war and or now returning to their native Mosul to find out whether their relatives and homes are safe, this road must have become the longest in their lives.

"The passage is closed, nobody move!" shouted the soldier guarding the Nasr bridge ("Victory Bridge" when translated from Arabic). The bridge connects the eastern and western parts of Mosul, or the left bank and the right bank, as the local residents call them. It is here that hundreds of the city residents are stuck trying to return to their homes in the western part of the city.

The residents of the "old town," the neighborhood where the most violent fights against Daesh started three weeks ago, are also trying to return to their homes.

© REUTERS / Alkis Konstantinidis
Iraqi Troops Save Yazidi Family From Daesh Terrorists in Mosul
"The bridge is closed for repairs, we have prohibited a lot of journalists from entering today, the road is closed," the soldier insisted.

Despite his decisive tone of voice, the soldier gives us hope.

"Wait, we will try to do something for you," he said.

Indeed, we passed the bridge an hour and a half later.

The Mosul residents waiting for the opening of the bridge have spent all day long at this checkpoint. Among them is Leyla, a 13-year-old girl from al-Maidan neighborhood, which had been liberated from Daesh militants by Iraqi forces several days ago. It is still too early to speak about the full liberation of the district, as dozens of terrorists in separate groups are moving around the area, resisting the Iraqi military.

© Sputnik / Sarah Nusreddin
Iraqi Military Detains Daesh Fighters Hiding Among Last Civilians in Mosul
"I will see our house for the first time after we fled it in the middle of the month of Ramadan [June 10]. My mother has seen the house, or what is left of it, earlier than me. Only the ruins remain," Leyla said.

Her mother, who did not give her name, said that they had lived in a three-storey building which had been blown up by car bombs. Leyla’s mother cannot imagine how the family will live in the ruins of their house, but is certain that this outcome is far better than joining the Iraqi refugees.

"I have been there several days ago, I have seen the fully destroyed house and the remains of the burnt cars … But it is better to live at war than to beg food for yourself and your children," the mother explained.

She added that together with her family, she had left home when the area was still under terrorist control.

"They gave us 10 minutes to flee, then they blasted the mine-studded cars … Men, women, children, everyone ran outside immediately … Ran in the direction of the military. Then we heard powerful explosions. Our homes, our property … everything has been blown up," the mother added.

Some die at war, some make profit of it

To save one’s life and the lives of one’s children is half the battle. Those who have lost their homes need to settle somewhere, even if only temporarily, while no help is available.

"I beg you, journalists, tell those living on the ‘left bank,’ let them have mercy for their neighbors from the ‘right bank’… How can they ask ‘three banknotes’ [around $300] or ‘five banknotes’ for the rent? We have left everything in our homes which had been blown up," a resident of the ash-Shifa neighborhood who identified herself hajj Rahma said.

The woman is now huddling together with her daughters and neighbors in a room given to them by the imam of the district’s mosque.

"We have no money to pay the rent. But we will better live all crowded together than wallow in debt and humiliation," Rahma said.

When we are finally allowed to cross the bridge to the ‘right bank’ of Mosul, we see an almost entirely ruined area. The gravel road leads us to the first checkpoint; the self-defense forces’ checkpoint. Behind it one can see a large, ruined building which resembles an ancient besieged fortress. The newly-replaced Iraqi flag now flies above the building. Until now, the Daesh flag flew in its place.

© AFP 2020 / AHMAD AL-RUBAYE
As Daesh is in Death-Throes, Could 'Sleeping' Regional Conflicts Catch Fire?
We cannot see a single building that has not been ruined by the shelling and bombardment. The Iraqi army made exhaustive efforts to expel the Daesh militants from the city. The blasts and shots can still be heard, the smoke is rising everywhere in the area. The police had warned us that it is better to turn back as the offensive has not yet been completed.

Walls of buildings contain inscriptions written by the militia with messages of support for the Iraqi armed forces. Most of them read the militia’s names and "we have been here."

A woman of about 40 walked around a huge puddle of sewage at the entrance of al-Abar neighborhood.

"There is nothing left for living here, no electricity, no drinking water, the houses are destroyed, and the bodies of Daesh terrorists are laying there, under the ruins," the woman said.

A 65-year-old Mosul resident believes that the bodies that had not been taken away pose a danger to the survivors' health.

"We do not know how to take out the corpses and bury them without catching a disease," the man said.

Khaled Ghanem, 52, who stands near his neighbor's house, where the body of a terrorist killed by the Iraqi Federal Police during the building's siege still lies. He told us that the militants had barricaded themselves in the house, along with the family that lived there.

"The battle lasted several hours, and then the police took it by storm," Khaled said. He added that the smell that came from the corpses a few days later prompted the residents to remove and bury the bodies themselves. However, they did not have time to bury all the cadavers.