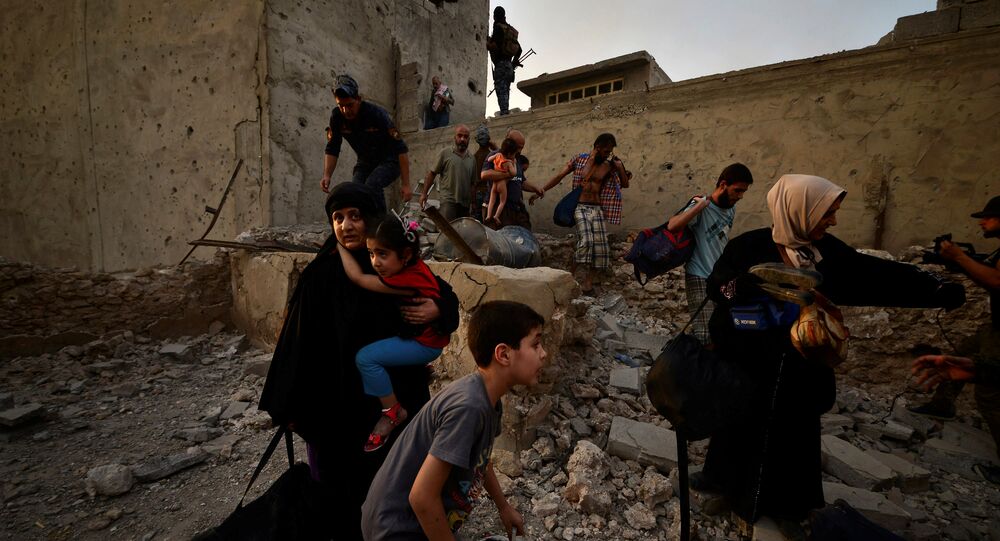 The Mosul battle is almost finished. However, the civilians get into trouble while returning to normal life and they need help, representatives of international humanitarian organizations working in the area told Sputnik.

© REUTERS / Alkis Konstantinidis
Iraqi Troops Save Yazidi Family From Daesh Terrorists in Mosul
MOSCOW (Sputnik), Lidia Ashikhmina — The battle for the Iraqi city of Mosul is almost finished, with only a few pockets of terrorists left to be cleared by the country’s security forces, but the civilians trapped in those zones and people slowly returning to normal life still require as much urgent help as they can get, representatives of international humanitarian organizations working in the area told Sputnik.

The immediate aftermath of the battle for Mosul will require international humanitarian organizations heavily involved in helping civilians in and around Mosul to continue their work in the region. Medecins Sans Frontieres (MSF), which is providing medical access through its eight projects in the vicinity of the city and has been present in the area during the nine-month battle for Mosul, pointed out that the facilities available to the wounded or sick people and medical staff helping them needed urgent improvement.

"Throughout Mosul, most hospitals have been damaged or destroyed and it is critical that residents` access to healthcare is restored. Inside besieged west Mosul, medical services are severely disrupted and MSF is operating one of only two functional hospitals in the west of the city. Outside, in the eastern parts of the city, medical facilities are only slowly getting back on their feet. As such there are gaps in medical services such as post-operative and rehabilitative care, mother and child health care and inpatient medical care," Jacob Kuehn, the MSF-Iraq Emergency communication coordinator, told Sputnik in response to a query.

The UN Office for the Coordination of Humanitarian Affairs (UNOCHA) said in its Tuesday press release that despite the end of the battle, the humanitarian crisis is far from being over. According to the UNOCHA, almost 933,000 people were displaced because of the crisis in Mosul and only about 224,000 have been able to return to their homes. According to the agency, 15 out of 54 residential neighborhoods in Western Mosul are heavily damaged. People need food, shelter, medical help and basic care. The UNOCHA urged for more assistance and stressed that more funding was desperately needed.

© AFP 2020 / AHMAD AL-RUBAYE
Mosul Liberation: Why US-Led Coalition May End Up in a Terrorist Trap
The fight is almost done, with only a few areas still being held by Daesh terrorists. As the terrorists are being ousted, humanitarian organizations are gaining more access to those in need. One such organization, UNICEF, is currently helping children, some of the most vulnerable members of the civilian population, who will need assistance not only in the immediate aftermath of the liberation but in weeks and months to come.

"As Iraqi security forces go in and clear those areas, more and more of them become accessible, so we’re still making sure that we deliver emergency packages of assistance to those that we can reach as soon as they become accessible. Also, those who are managing to flee and make it to screening center, from there on they go to what we call muster point and we can reach them at that point and provide them with water and emergency packages of food and hygiene items and so on," Sharon Behn, the chief of communications at UNICEF Iraq, told Sputnik.

Those who are sick or wounded get sent to trauma centers, where they receive care, before being referring further. While the situation on the ground is constantly changing, many of the changes are currently for the better.

"For example, in West Mosul, UNICEF has already supported the reopening of 136 schools, which is wonderful because it will give the children the ability to go back to school and to have some normality in their lives which is a first step for them to recuperate from the nightmares that they’ve been living and go back to having a normal childhood," Behn said.

According to the UNICEF representative, the organization helped open 470 schools in both East and West Mosul for about 365,000 children, which was no small feat given that the whole area had been engulfed in fighting just a few months. Another positive development is the restoration of some parts of the water system, which means renewed access to fresh water.

© REUTERS / Alkis Konstantinidis
Liberation of Mosul Big Success for Iraqi Amy, Anti-Daesh Coalition – German FM
UNICEF has also been making progress on reunification, but the devastating nature of the conflict means that there are still many families that have yet to be reunited.

"We have managed with our partners to reunify 1,333 children with their families. Right now we have, separated and unaccompanied, 1,060 children," Behn noted.

Children are considered "separated" when they are with a relative or some kind of a caregiver, but not with their immediate families. Children labeled as "unaccompanied," on the other hand, are completely on their own. The organization has set up a system which allows it to match such children to families looking for their kids.

"As soon as the child comes in separated or unaccompanied, the details are taken down, and, immediately, UNICEF through its partners, immediately starts to track the families," Behn said.

The unaccompanied children are housed by host families while their relatives are being searched for.

Months of work ahead

Children of Mosul are going to need more help getting back into their daily life routines during the weeks and months to come, therefore humanitarian work will not stop now that the city is all but freed.

© REUTERS / Alaa Al-Marjani
Fall of Mosul Points to Future Iran Showdown With Saudis, Israelis in Syria
She stressed the importance of being able to supply all of those services: education, vaccination and many other necessities. However, ensuring the physical well-being of the children is only part of the work that UNICEF is doing in the war-torn country. Psychosocial care is one of the most important aspects of the help that is being provided for the children in Mosul, who have lived through the unimaginable pain, loss and destruction.

"When we see children that have been distressed, that need psychosocial care, we refer them to specialized partners who can take care of that," Behn said.

She added that psychosocial care was being introduced in schools as well, so that children would be able to turn to social workers who specialize in this kind of work.

"As we go forward, I think, it’s important to remember that even though the battle for Mosul is winding down, the needs of the children are not. Their needs will continue for weeks and months to come, and we must think of them, we must not forget the children of Mosul," Behn said.

UNICEF's current action plan for Iraq sets out several goals that include ensuring children's and adolescents' access to health services, food, drinking water, sanitation; helping improve protection system for children and women; assisting children and adolescents in gaining access to education and civic engagement; and promoting a number of other programs and policies that help stabilize the society shaken by the war.

Mosul Liberation: Why US-Led Coalition May End Up in a Terrorist Trap