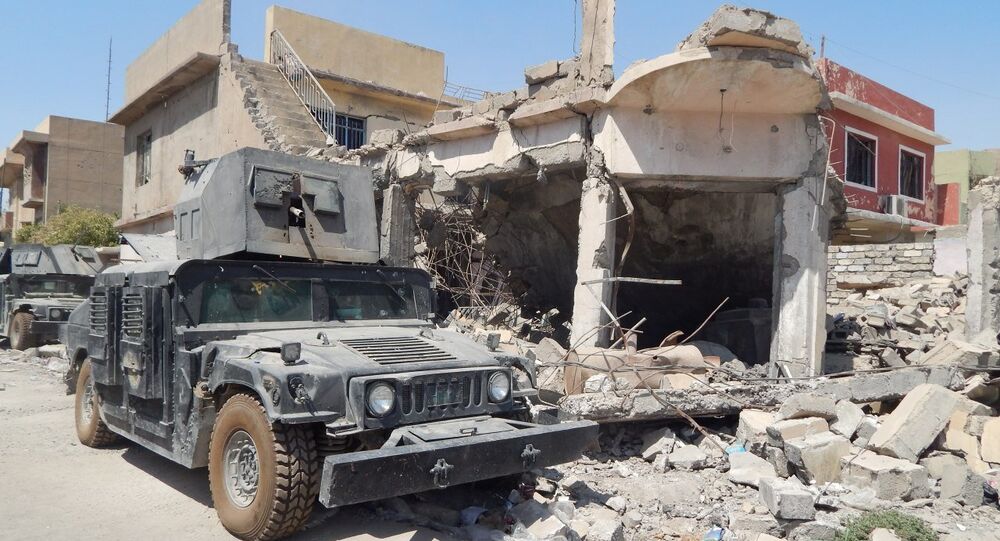 The Iraqi military has detained dozens of Daesh fighters and supporters during a sweep of western Mosul’s Old City, where civilians still remain, according to a Sputnik reporter.

© AFP 2021 / AHMAD AL-RUBAYE
Mosul Liberation: Why US-Led Coalition May End Up in a Terrorist Trap
IRAQ (SPUTNIK) — The reporter watched as Iraqi military forces sorted through city inhabitants, trying to identify militants hiding among the civilians. Some people are reportedly coming to the Iraqi military checkpoint in Makaui district, where they are questioned by intelligence officers. Some are identified as suspects and detained right away; others are moved on to the military checkpoint near the Al-Akrab bridge that connects the two parts of the city.
© Sputnik / Sarah Nusreddin
Wrecked car in Western Mosul, Iraq

The wounded are moved to a nearby hospital set up by the local militia.

A source in anti-terrorism department told Sputnik that about 25 families of Daesh supporters have left the city, and that authorities have detained several women who actively helped the terrorists.

"Several women were detained after the investigation, since we confirmed they were among the ranks of Daesh administration," the source said. According to him, the intelligence service has lists of data on Daesh fighters in Nineveh province.

The Iraqi military also added that several dozen militants were detained on suspicion of Daesh allegiance, both men and women. First, they will be taken to preliminary questioning facilities in Nineveh province; then they'll be sent to Baghdad, where their fate will be decided.

One of the women, who is now detained in a sorting center, has told the army that special forces saved her from the wreckage of her house after it was destroyed by a car bomb. She said the military also saved her children and neighbors.

"Daesh fighters dug in in our districts, many of them are still there, and they say they are going to fight until the last drop of blood," the Mosul woman said. The militants used the local population as a "human shield" and forbade even women with children to leave the war zone, she explained.