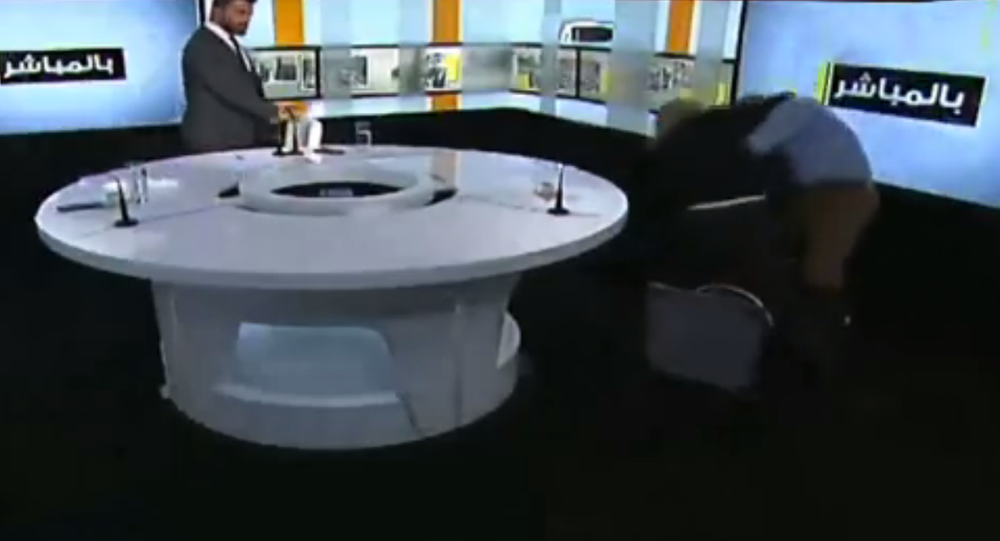 A fistfight broke out between a Lebanese Islamist cleric and a former Syrian member of Parliament on television. The latter attacked the former after the former refused to offer condolences to the MP for his cousin being executed by Daesh.

The two men were guests on Bel Moubashar, a Lebanese political talk show that airs on OTV. The clip, which is in Arabic, was translated to English by the Middle East Media Research Institute.

Daher extended his condolences to Shalash, as his cousin had been beheaded by Daesh one day before the program aired after Daesh accused him of collaborating with Assad. The host then asked Duqmaq if he would also extend condolences.

Duqmaq replied that he would "extend my condolences to the Syrian people for anyone killed."

Shalash, noticing the dodge, asked him to clarify: "Brother, he asked you a straight question: Are you extending me condolences or not?"

Duqmaq replied: "It's none of your business."

Shalash then loudly wondered how it could "possibly be none of my business?!"

The two men began to argue. Duqmaq cried for Shalash to shut up, to which Shalash replied "to hell with you, you bastard!"

Shalash burst from his chair and made for Duqmaq, who grabbed a glass of water and threw it in Shalash's face. The two men grabbed one another and began to brawl, slamming into TV screens behind them, until Daher grabbed Duqmaq and several other employees grabbed Shalash.

Duqmaq then grabbed a second glass of water and aimed it at Shalash, but this time only succeeded in drenching Daher.

Shalash, who sustained a mild injury, continued the interview, while Duqmaq stormed away from the studio. Shalash told Daher that Duqmaq "is not a real sheikh. He is an ignorant man who did not come to speak about politics. He should not be on television."

Shalash also accused Duqmaq of raping a woman and of hoarding weapons in his home, charges that had been previously brought against Duqmaq.

Later that day, Duqmaq uploaded a video onto YouTube that has since been deleted. According to Stepfeed, Duqmaq called Shalash a "thug" and thanked Daesh for executing his cousin. He added that he hoped the Syrians returned to their country, as over 150,000 Syrian refugees have fled to Lebanon since the beginning of the civil war in 2011.

Duqmaq concluded his rebuttal by calling Shalash and Assad "garbage."