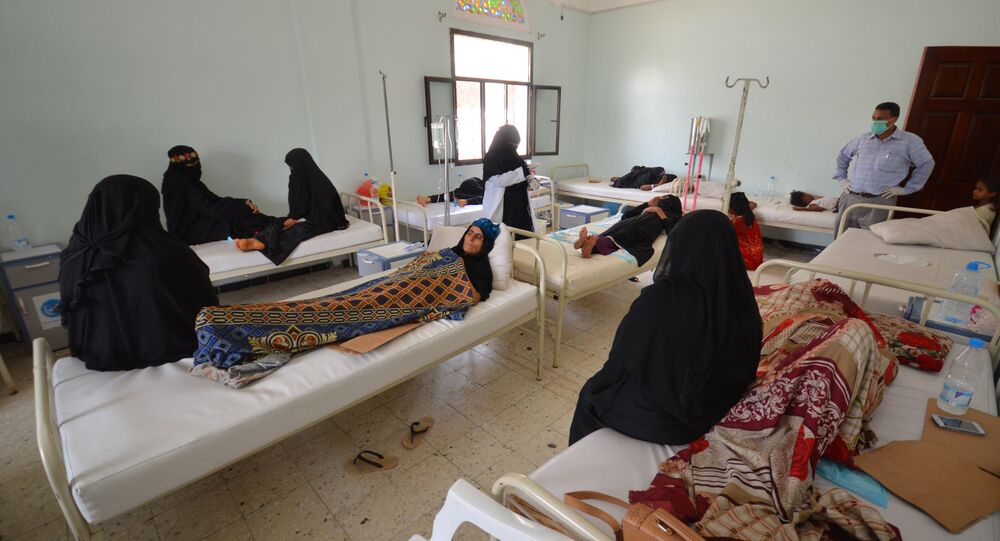 The Red Cross has reported that the cholera outbreak in Yemen has reached a rampant pace of growth, with more than 300,000 cases suspected in the war torn nation of 25 million.

The International Committee of the Red Cross said that the cholera epidemic, which is growing by 7,000 new cases every day in just a fraction of the country, "continues to spiral out of control."

The World Health Organization (WHO) reported more than 262,000 suspected cases and 1,587 deaths on July 2 — but officials were only able to collect data from 21 of Yemen's 23 governorates. On June 24, the WHO reported the number of cases at 200,000, a 50-percent increase in cases over just 16 days. During the initial outbreak in April, the WHO predicted that the 300,000 mark wouldn't be reached until autumn.

The death toll stands at 1,700, according to ICRC spokeswoman Iolanda Jaquemet.

"Unfortunately, we have a perfect storm in Yemen," she told the Huffington Post on Monday. "The country has been brought to its knees because of this conflict."

Cholera is a highly infectious disease spread through waste products in food and water, and 14 million Yemenis have no access to clean water. Treatment is both cheap and effective, reducing mortality rates from over 50 percent to under one percent, but war-torn conditions in Yemen have made it difficult to provide even basic treatment to the afflicted. Less than half of the nation's health care facilities are operating as intended.

The outbreak is centered in the capital city of Sana'a, which is controlled by the Iran-backed Shiite Houthi rebel group. Poor conditions in the city brought on by a Saudi blockade have turned it into the "perfect storm for cholera" according to the WHO.

Cases are also concentrated in three other provinces: Amran, Hajjah, and Al Hudaydah. All are under Houthi control. However, the outbreak has also been reported in Saudi-backed, Hadi government-controlled areas, as well as areas controlled by al-Qaeda.

The disease disproportionately affects children and the elderly. "Half of these cases are children," UNICEF's Sherin Varkey told NPR in early July. "To understand the scale, we know that one new child is reporting sick with diarrhea every minute. The conflict has had a direct impact on children in terms of many children injured, maimed and killed. But the additional effect on children is due to the failure and collapse of the public service systems."

Humanitarian groups have reapportioned aid money away from food to cholera treatments to fight the epidemic, but this threatens to in turn lead to a famine. The United Nations' humanitarian coordinator in Yemen, Jamie McGoldrick, said that most of the $1.1 billion donated in aid by sympathetic states is still tied up, and so he's working on a shoestring budget.

"Humanitarian organizations have had to reprogramme their resources away from malnutrition and reuse them to control the cholera outbreak," he told the Associated Free Press on Thursday. "And if we don't get these resources replaced, then using those resources for cholera will mean that food insecurity will suffer.

"We're trying to do our best, but it's very much beyond what we can cope with."

Over 900 Yemenis Die of Cholera Outbreak Since Late April - WHO