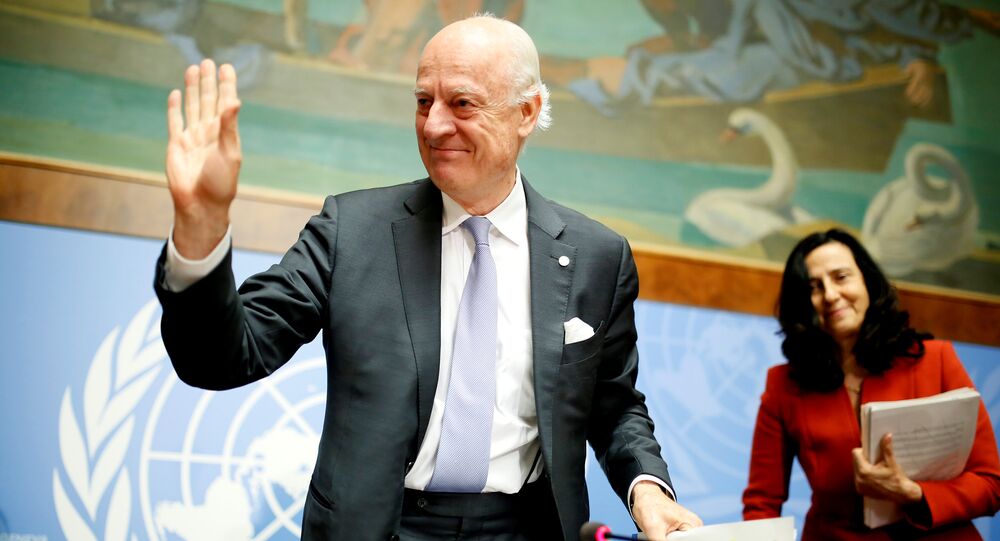 Two main topics are on the agenda of the seventh Geneva round of the intra-Syrian talks, Russian Permanent Representative to the United Nations in Geneva Alexey Borodavkin said Monday.

© Photo : Mohamed Maaruf
Syria Urges UN to Take Action Against Terrorism After Attack Near Aleppon
GENEVA (Sputnik) — Two main topics on the agenda of the seventh Geneva round of the intra-Syrian talks are anti-terrorism fight and constitutional reform, Russian Permanent Representative to the United Nations in Geneva Alexey Borodavkin said Monday.

"There are two main topics on the agenda. First — joining efforts of government and opposition forces in fight again terrorism, against Daesh and Nusra terrorists [terrorist groups, outlawed in Russia and other countries]. Second is constitution reform… These are key issues to all other issues of political settlement in Syria," Borodavkin told reporters after meeting with UN Special Envoy for Syria Staffan de Mistura and the UNSC permanent members' ambassadors.

UN Special Envoy for Syria Staffan de Mistura said Monday he had a "useful meeting" with ambassadors of five permanent member-states of the UN Security Council (UNSC) on the sidelines of the intra-Syrian talks in Geneva.

"We had a P5 meetings, it was very useful indeed, "de Mistura told reporters after the meeting.

Earlier in the day, de Misura met with the Syrian government delegation, led by Ambassador to the UN Bashar Jaafari.

The seventh round of the UN-brokered Syrian peace talks in Geneva kicked off on Monday and is scheduled to finish on Saturday.

The permanent members of the UNSC are China, France, Russia, the United Kingdom, and the United States.

Geneva-7 Round of Syria Talks Kicks Off, Damascus Meets With de Mistura

De Mistura: Process on Legal, Constitutional Aspects in Syria ‘Up and Running’